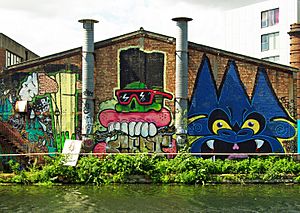 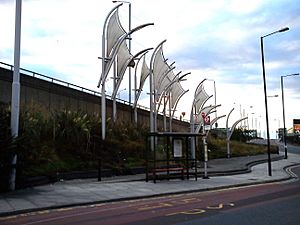 Fish tail sculptures at the junction of Monier Road and Wansbeck Road.

Fish Island is a district of the London Borough of Tower Hamlets in London's East End; it is separated from the rest of the Old Ford area of Bow by the Hertford Union Canal to the north and the East Cross Road (A12), constructed in the late 1960s, to the west.

The River Lea Navigation lies to the east with Stratford and the Queen Elizabeth Olympic Park beyond it. It is about 20 hectares or 50 acres in extent.

The Fish Island area was originally known to local residents as "the Island" and later Fish Island, in reference to the roads with the names of freshwater fish: Smeed, Dace, Monier, Bream, Roach etc.

In the early 12th century a bow-shaped stone bridge was built over the River Lea giving its name to the west bank settlement of Bow. The earlier crossing point, a river ford, half a mile upstream became known as Eldeford or Oldeford by the 13th century. The area north of Old Ford, between the River Lea and Hackney Brook, known as Old Ford Marsh, was intersected by canals and drained in the late 18th and early 19th century, forming the district that now includes Fish Island.

In 1865, a 30-acre plot in Old Ford was purchased to be used as a gas works, but the Gas Light and Coke Company established what would become known as Fish Island, giving it its distinctive road names, and building a mixed residential and industrial development instead. The area saw significant bombing during World War II with damaged housing demolished, post war, to make way for factories and warehouses.

Fish Island has a long tradition as a home to artists and art spaces. The Island, and adjoining Hackney Wick, has 'one of the highest densities of fine artists, designers and artisans in Europe', with a 2009 study identifying around 600 artists' studios.

In 2014, a partnership between tech hub The Trampery and the Barbican Centre, led to the establishment of Fish Island Labs, a mentored art and technology project. The Labs will allow 40 to 50 participants, for ten months, to share a low-cost workspace in a converted Fish Island warehouse.

Channel 4’s Big Breakfast was broadcast from the Lock Keeper's Cottage at Fish Island from 1992 to 2002.

Once a largely industrial area, the island is currently going through a major regeneration, though numerous industrial units remain. This is partially credited to its proximity to the Olympic Park, on the opposite bank of the Lea. It is home to a mixture of factories, residential flats and, more recently, studios and workshops for those working in creative industries. The local planning authority intends to see it developed as a mixed-use community with further land used for housing, employment and open space, and improved access links.

Fish Island is home to the Percy Dalton Peanut Factory which has now been largely converted into artist studios.

There are no stations in the area however Hackney Wick for London Overground in Hackney Wick and Pudding Mill Lane for the Docklands Light Railway in Stratford are located nearby.

Fish Island is connected to the National Road Network by the north/north east-south A12 (also known as the East Cross Route).

The Hertford Union Canal and River Lea Navigation pass north and east of the area.

All content from Kiddle encyclopedia articles (including the article images and facts) can be freely used under Attribution-ShareAlike license, unless stated otherwise. Cite this article:
Fish Island, London Facts for Kids. Kiddle Encyclopedia.