Aldgate was the eastern-most gateway through the London Wall leading from the City of London to Whitechapel and the East End of London. It gives its name to a City ward bounded by White Kennet Street in the north and Crutched Friars in the south, taking in Leadenhall and Fenchurch Streets, which remain principal thoroughfares through the City, each splitting from the short street named Aldgate that connects to Aldgate High Street. The road is situated 2.3 miles (4 km) east north-east of Charing Cross.

John Cass's school, where a plaque records the former placement of London Wall, is sited on the north side of Aldgate (the street).

The etymology of the name "Aldgate" is disputed. It is first recorded in 1052 as Æst geat ("east gate") but had become Alegate by 1108. Writing in the 16th century, John Stow derived the name from "Old Gate" (Aeld Gate). However, Henry Harben, writing in 1918, contended that this was wrong and that documents show that the "d" is missing in documents written before 1486–7. Alternative meanings include "Ale Gate" in connection with a putative ale-house or "All Gate" meaning the gate was free to all. Other possibilities canvassed by Harben include reference to a Saxon named "Ealh," or reference to foreigners ("el") or oil ("ele") or "awl". Gillian Bebbington, writing in 1972, suggests Alegate, Aelgate ("public gate") or Aeldgate" (Old Gate") as equally viable alternatives whilst Weinreb and Hibbert, writing in 1983, revert to Stow's theory that the name means "Old Gate".

It is thought that a gate at Aldgate spanned the road to Colchester in the Roman period, when London Wall was constructed. The gateway – which probably had two circular towers – stood at the corner of the modern Duke's Place, on the east side of the City, with a busy thoroughfare passing through it. It was rebuilt between 1108 and 1147, again in 1215, and reconstructed completely between 1607 and 1609 “in a more classical and less functional style”. Like London’s other gates, Aldgate was “fortified with porticullises and chained” in 1377 due to concerns about potential attacks by the French. The gate was finally removed in 1761; it was temporarily re-erected at Bethnal Green.

Aldgate did have defensive functions, and, between its early 13th and early 17th-century reconstructions, was breached on only two occasions. The first occurred during the Great Rising in the summer of 1381 when thousands of insurgents from surrounding region, assisted by sympathizers within and without, entered the City through Aldgate. The second breach came in the summer of 1471 when troops led by the Bastard of Fauconberg forced open the gate. According to Chaucer scholar Paul Strohm, the assault was only successful “by the design of [Aldgate’s] defenders”: after a number of Fauconberg’s men were allowed to gain entry, the gate’s "portcullis was lowered to trap them inside, where they were taken and slain".

The Augustinians priory of Holy Trinity Aldgate was founded by Matilda, the wife of King Henry I, in 1108, on ground just inside the gate.

Within Aldgate ward, a short distance to the north of the gate, Jews settled from 1181, until their expulsion in 1290 by King Edward I. The area became known as Old Jewry. Jews were welcomed back by Oliver Cromwell, and once again they settled in the area, founding London's oldest synagogue at Bevis Marks in 1698.

While he was a customs official, from 1374 until 1386, Geoffrey Chaucer occupied apartments above the gate, where he wrote some of his poems. London’s aldermen had first conceived of renting unneeded space over the City gates earlier in the century. Although keenly sought after due to their location, the rooms “were built for military occupancy and remained rough-hewn [and] nonprivate”. Chaucer likely occupied the single tower on the south end of the gate. A 1585 sketch of Aldgate’s north tower reveals an interior room of approximately 16' by 14'; its southern sibling probably had similar dimensions. The space would have been “cramped, cold, rudimentary in its sanitary arrangements, and (perhaps most seriously in the case of a writer) ill lit, even at midday”.

In about 1420 the Whitechapel Bell Foundry was founded in Aldgate, but it later moved to nearby Whitechapel. The foundry continued to supply bells to churches in the City, including the rebuilt church of St Botolph Without Aldgate in 1744.

During the late 16th-century, an immigrant from Antwerp named Jacob Jansen (d. 1593) established a pottery producing English Delftware at Aldgate.

In his Survey of London (1598), John Stowe wrote that Aldgate, “hath had two pair of gates, though now but one; the hooks remaineth yet. Also there hath been two portcullisses; the one of them remaineth, the other wanteth, but the place of letting down is manifest”. 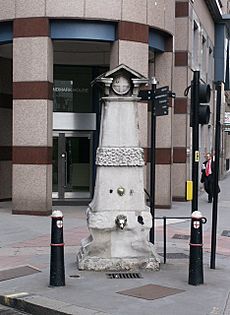 Aldgate Pump, at the junction of Aldgate, Leadenhall Street and Fenchurch Street

At Aldgate's junction with Leadenhall Street and Fenchurch Street is the site of the old Aldgate Pump. From 1700 it was from this point that distances were measured into the counties of Essex and Middlesex. The original pump was taken down in 1876, and a 'faux' pump and drinking fountain was erected several yards to the west of the original; it was supplied by water from the New River. In ancient deeds, Alegate Well is mentioned, adjoining the City wall, and this may have been the source (of water) for the original pump. A section of the remains of Holy Trinity Priory can be seen through a window in a nearby office block, on the north side.

In 1773 Poems on Various Subjects, Religious and Moral by Phillis Wheatley, the first book by an African American was published in Aldgate after her owners could not find a publisher in Boston, Massachusetts.

Daniel Mendoza was born in 1764 to a Jewish family in Aldgate. He was author of The Art of Boxing and became an English boxing champion from 1792 to 1795.

The area around the large traffic roundabout to the east of where the gate stood is also often referred to as Aldgate (although strictly, this is Aldgate High Street, and extends a short distance into Whitechapel; it is also known occasionally by the epithet 'Gardiners' Corner', in honour of a long-disappeared department store). 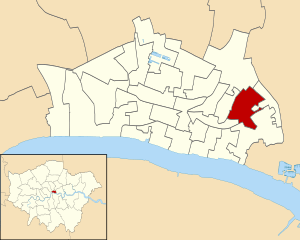 Location within the City

The City ward of Aldgate is bounded on the east by the line of the former London Wall, effectively parallel with Houndsditch, which separates it from the Portsoken ward; it is bounded on the south by Tower ward and on the west and north by the Langbourn, Lime Street, and Bishopsgate wards. 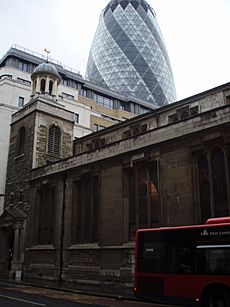 The ward today is dominated by the insurance industry, with several brokers and underwriters based there; prominent buildings include the Lloyd's Register building, 30 St Mary Axe (formerly the Swiss Re Building), the Willis Building and the London Metal Exchange.

The Bevis Marks Synagogue (1699), the oldest in the United Kingdom, is also located in the ward, on Bevis Marks.

The nearest London Underground station is Aldgate on the Circle and Metropolitan lines. Nearby mainline railway stations are located at Liverpool Street and Fenchurch Street, and Tower Gateway is the closest Docklands Light Railway station.

All content from Kiddle encyclopedia articles (including the article images and facts) can be freely used under Attribution-ShareAlike license, unless stated otherwise. Cite this article:
Aldgate Facts for Kids. Kiddle Encyclopedia.