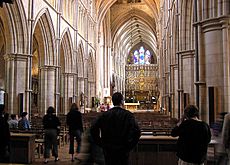 The nave of Southwark Cathedral 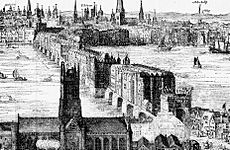 A drawing showing Old London Bridge with Southwark Priory (the Cathedral) in 1616, in the foreground

Southwark Cathedral, in Southwark, London, lies on the south bank of the River Thames close to London Bridge.

It is the mother church of the Anglican Diocese of Southwark. It has been a place of Christian worship for over 1,000 years, but a cathedral only since 1905. The present building is mainly Gothic, from 1220 to 1420.

The main railway line from London Bridge station to Cannon Street station passes close to the cathedral, blocking the view from the south side. Borough Market and the Hall of the Worshipful Company of Glaziers and Painters of Glass by the river are close by.

The earliest reference to the site was in the Domesday Book survey of 1086. The 'Minster' of Southwark seems to be under the control of Bishop Odo of Bayeux (William the Conqueror's half-brother). Its early history is obscure. A Saxon minster (a teaching church) served a south Thames area. In 1106, Henry I's reign, the latter became an Augustinian Priory: Norman stonework can still be seen, and Thomas Becket preached here before departing to Canterbury, days before his murder in 1170.

The church is the oldest Gothic church building in London, built from 1220 to 1420. It is one of the smallest cathedrals, which is because it was not built as a cathedral, but as a Priory chapel.

The cathedral has three choirs, The main Cathedral Choir is supported financially by the St Olave's & St Saviour's Schools Foundation. They were two parochial schools set up in the 1560s, and still hold their annual services here as their 'foundation' church.

All content from Kiddle encyclopedia articles (including the article images and facts) can be freely used under Attribution-ShareAlike license, unless stated otherwise. Cite this article:
Southwark Cathedral Facts for Kids. Kiddle Encyclopedia.