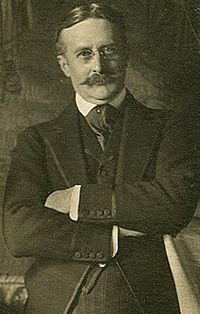 Harry Gordon Selfridge, Sr. (11 January 1858 – 8 May 1947) was an American-British business owner. He founded the London-based department store Selfridges. He was one of the most respected and wealthy retail businessmen in the United Kingdom.

Selfridge was born in Ripon, Wisconsin. Selfridge was raised in Jackson, Michigan. Selfridge's parents were Robert Oliver Selfridge and his wife Lois. They had three sons. His father fought in the American Civil War. He was a major in the Union Army. After he was discharged, he did not come back to the family.

Both of Selfridge's brothers died young. His mother taught school. From the age of 10, Harry began working. He sold newspapers to help his mother. Later he stocked shelves at a store.

After visiting England, Selfridge decided to open his own department store in London. In 1909, his store opened on Oxford Street. It brought about many changes in shopping. It is still a big store today. In fact, Selfridges & Co. was named the Best Department Store in the World in 2010 and 2012.and 2014.

In 1890, Selfridge married Rose Buckingham. Her family was wealthy and influential. Rose was a property developer when she married. She died of the Spanish flu in 1918. Harry never married again, even though he had several girlfriends.

Selfridge wrote the book The Romance of Commerce. He used a ghostwriter to help him write it. The book was published in 1918.

All content from Kiddle encyclopedia articles (including the article images and facts) can be freely used under Attribution-ShareAlike license, unless stated otherwise. Cite this article:
Harry Gordon Selfridge Facts for Kids. Kiddle Encyclopedia.