Kids Encyclopedia Facts
Not to be confused with Navy or Navi. 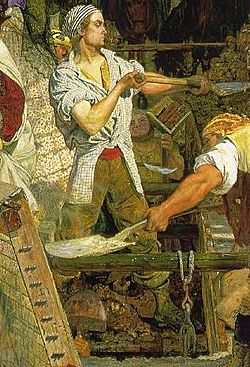 Navvy, a shorter form of navigator (UK) or navigational engineer (US), is particularly applied to describe the manual labourers working on major civil engineering projects and occasionally (in North America) to refer to mechanical shovels and earth moving machinery. The term was coined in the late 18th century in Great Britain when numerous canals were being built, which were also sometimes known as "navigations", or "eternal navigations", intended to last forever.

A study of 19th century British railway contracts by David Brooke, coinciding with census returns, conclusively demonstrates the great majority of navvies in Britain were English. He also states that 'only the ubiquitous Irish can be regarded as a truly international force in railway construction', but the Irish were only about 30% of the navvies.

By 1818, high wages in North America attracted many Irish workers to become a major part of the workforce on the construction of the Erie Canal in New York State and similar projects. Navvies also participated in building canals in Britain, and by the 20th century, they were the predominant workforce.

Migration from canal to railway projects

The construction of canals in Britain was superseded by contracts to construct railway projects from 1830 onward, which developed into the railway manias, and the same term was applied to the workmen employed on building rail tracks, their tunnels, cuttings and embankments. There were 250,000 navvies employed during the apex of British railway expansion efforts.

Navvies working on railway projects typically continued to work using hand tools, supplemented with explosives (particularly when tunnelling, and to clear obdurate difficulties). Steam-powered mechanical diggers or excavators (initially called 'steam navvies') were available in the 1840s, but were not considered cost effective until much later in the 19th century, especially in Britain and Europe where experienced labourers were easily obtained and comparatively cheap. Elsewhere, for example in the

"United States and Canada, where labour was more scarce and expensive, mechanical diggers were used. In the States the machine tradition became so strong that [...] the word navvy is understood to mean not a man but a steam shovel."

Being a navvy labourer became a cultural experience unto its own during the 19th century. Most accounts chronicling the life of a navvy worker come from local newspapers portraying navvies as drunk and unruly men, but fail to provide any mention that families were formed and raised despite the navvy's traveling demands.

The navvies working on the Liverpool and Manchester Railway were paid daily and their pay reputedly went on ale, leaving little for food. When the workers were unfit to work, monies were subtracted from their wages and meal tokens were issued. These tokens could be handed in at meal caravans for a bowl of soup and a portion of bread. At first the token was a slip of paper called a "flimsy" because of its thickness. In today's terms it would be similar to a grade called "bank paper". As these tokens could be copied by the forgers, the Liverpool and Manchester Railway supplied its contractors with six-sided food tokens that were surrendered for meals. These were cut from brass and had the initials LMR stamped upon them. This reduced the problems of drunken navvies and eliminated the local farm labourers freeloading from the food caravans. Tokens and a description of their use can be found in the Museum of Science & Industry in Manchester.

In the mid-1800s some efforts were made by evangelical Anglicans led by Elizabeth Garnett to administer to the perceived religious needs of navvy settlements, with preaching, a newsletter and charity work. The construction tycoon Morton Peto encouraged religious services for his workforce, as well as providing some social services to the navvy populations. 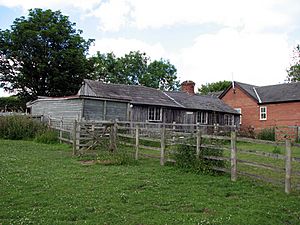 Wooden huts at the former Edmondthorpe and Wymondham railway station, the last surviving navvy housing in the UK and protected as a Grade II listed building.

Many of the navvies employed to build the railways in England during the early part of the 19th century lived in squalid temporary accommodations referred to as "shanty towns." Due in part to constructing through rural areas, and, in part, the navvies negative reputation, two-thirds of the railway construction sites had housing erected specifically for the navvy. Initially, the housing "huts" were constructed quickly and meant to be temporary. As a result, little thought was given to comfort, let alone sanitation, which was actually a prominent issue for everyone during the Victorian era. Shanties "were clearly unhealthy places in which to live, and it was not uncommon for a navvy community to be overtaken by cholera, dysentery or typhus."

In addition to these unhygienic living conditions, navvies shared housing, some even sleeping on floors. The majority of navvies were Englishmen, with 30% of the group being Irish. While this ratio varied from navvy shanty town to shanty town, sleeping arrangements were segregated. In at least one documented instance, a riot broke out between the two nationalities in one navvy shanty town, causing local magistrates to arrest 12 individuals. Though, this is not necessarily indicative of relations between the English and Irish in all navvy gangs.

Over time, housing arrangements progressed positively, with the structures being built with more care, and even attached land being offered for use so navvies and their families could grow their own food. 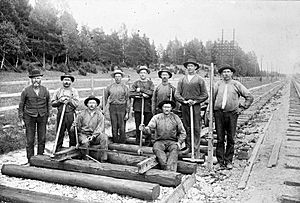 Navvies constructing the railway between Stockholm and Uppsala, Sweden (ca 1900).

In addition to their nomadic living arrangements, navvies confronted varying degrees of dangerous work environments that depended both on the terrain, and the locals' reception of them.

Due to limited safety protocols, navvies were frequently injured or killed on the job. For each mile of rail laid, there was an average of 3 work related deaths, which was even higher when working on sections that required tunnelling. The particularly high incidence of navvy mortality during the construction of the Woodhead Tunnel prompted the Enquiry of 1846, which eventually led to the need for the formation of and evaluation by a Select Committee on Railway Labourers 1846.

The natural tension between locals and outsiders sometimes bred distrust of the navvies. Occasionally, this strain between the two would result in violence such as riots, or death. One such instance occurred at Sampford Peverell in 1811. John Chave, a local who was regionally well known for living in a "haunted house," was approached by a group of inebriated navvies. The encounter left Chave feeling threatened, so after proceeding home with the navvy group in tow, he used a gun to shoot a warning shot into the crowd, which hit and killed one of the group members causing a riot to ensue. The death was later deemed a justifiable homicide. As newspapers reported on similar conflicts, anticipated tensions grew for the local inhabitants of the regions the navvy worked in, when they arrived.

In many cases, though, as time passed, the local establishments benefited from navvy business, which strengthened relations, and even forged friendships with an occasional local helping teach reading and writing to some navvies.

Many slang terms were used as a method of communication among navvies, which facilitated bonding amongst them, as it was frequently used for a laugh, or as a method of asking for someone to watch your back, while you sneaked a smoke break, or went off for a drink.

Much of the terminology appears to be fluid, relying primarily on rhyming with the intended meaning. One example provided by Daniel William Barrett, in his book, Life and Work Among The Navvies, contains the following navvy slang; "'now, Jack, I'm goin' to get a tiddley wink of pig's ear; keep your mince pies on the Billy Gorman.'" This means the speaker's going for a beer, and asking the person being addressed, to keep his eyes on the foreman. Their exclusionary code usually left outsiders confused.

Contemporary use of the term "navvy"

All content from Kiddle encyclopedia articles (including the article images and facts) can be freely used under Attribution-ShareAlike license, unless stated otherwise. Cite this article:
Navvy Facts for Kids. Kiddle Encyclopedia.