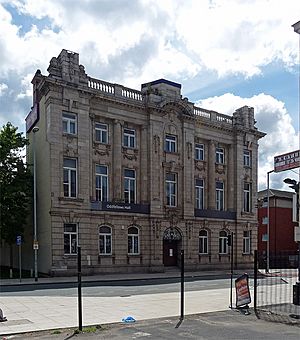 Oddfellows Hall, the first home of the museum 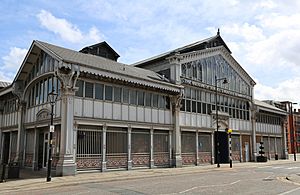 Exterior of the museum's Air and Space Hall 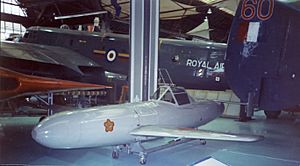 A kamikaze Ohka aircraft in exhibition 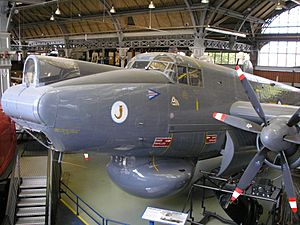 The Science and Industry Museum in Manchester, England, traces the development of science, technology and industry with emphasis on the city's achievements in these fields. The museum is part of the Science Museum Group, a non-departmental public body of the Department for Culture, Media and Sport, having merged with the National Science Museum in 2012.

The museum is an Anchor Point of the European Route of Industrial Heritage and is on the site of the world's first passenger railway station – Manchester Liverpool Road – which opened as part of the Liverpool and Manchester Railway in 1830. The railway station frontage and 1830 warehouse are both Grade I listed.

The museum was originally called the North Western Museum of Science and Industry when it opened in 1969 in temporary premises on Grosvenor Street in Chorlton-on-Medlock. It had close ties with UMIST, having mostly grown out of the Department of History of Science & Technology.

In 1978, Greater Manchester Council purchased the earliest part of the former Liverpool Road Station from British Rail, which had been closed in 1975. The council paid the nominal sum of £1 for the site. The museum opened at this site on 15 September 1983 and later expanded to include the whole of the former station.

Since 2007 the museum has organised an annual science festival in Manchester.

In 2014, it was announced Sally MacDonald would become the director. MacDonald left her role as head of collections at University College London and succeeded Jean Franczyk as director.

Exhibits at the Science and Industry Museum include: 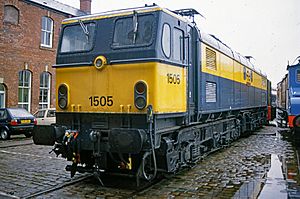 NS 1505 Ariadne outside the museum

Previous permanent exhibition galleries which have now been decommissioned include: 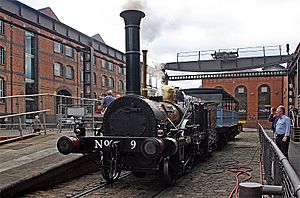 Until 2018, demonstration passenger trains ran within the museum grounds on selected dates. Trains were hauled by the museum's two operational steam locomotives:

The museum's railway line was formerly connected to the national rail network near Ordsall Lane Junction. However, construction of Network Rail's Ordsall Chord railway link, which was completed in 2017, has now severed this connection and significantly shortened the museum's running line despite a legal battle to save it.

As of 2019, railway operations at the museum were suspended indefinitely. 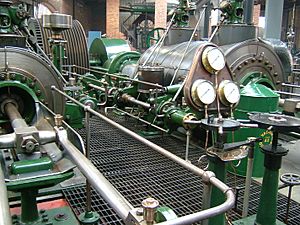 The last steam engine ever built to power a mill 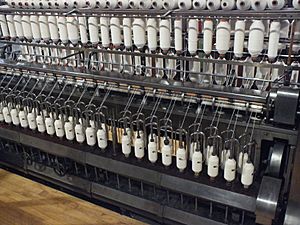 There is also the exhibit of spinning and weaving machines, covering all the steps from wool to textile. These machines are run for a few minutes at scheduled times.

The museum is adjacent to a £1 billion redevelopment area on the former site of Granada Studios. Work on the area, which will be known as St John's Quarter, is expected to be completed by 2022. The Manchester International Festival's new Factory venue is set to open alongside the MSI at the end of 2019 as part of the redevelopment.

The MSI have been granted planning permission to build a new Special Exhibition Gallery on the ground floor of the New Warehouse. Architectural firm Carmody Groarke won a competition to design the new gallery which is set to be complete by October 2020.

In July 2016 the council stated that, along with development partner Allied London, they had been in talks with the MSI "exploring how the presence of Factory opens up new possibilities for revitalising the whole area below Deansgate as a creative hub, with a joined up and extensive public realm. MSI's own developments plans are being aligned with this creative vision and the museum itself will become part of the creative public realm, with MSI's creative science offer balancing the creative and cultural production of Factory."

All content from Kiddle encyclopedia articles (including the article images and facts) can be freely used under Attribution-ShareAlike license, unless stated otherwise. Cite this article:
Science and Industry Museum Facts for Kids. Kiddle Encyclopedia.