Kids Encyclopedia Facts
Not to be confused with Chorlton-cum-Hardy.

Chorlton-on-Medlock is an inner city area of Manchester, England.

Historically in Lancashire, Chorlton-on-Medlock is bordered to the north by the River Medlock, which runs immediately south of Manchester city centre. Its other borders roughly correspond to Stockport Road, Hathersage Road, Moss Lane East and Boundary Lane. Neighbouring districts are Hulme to the west, Ardwick to the east and Victoria Park, Rusholme and Moss Side to the south. A large portion of the district along Oxford Road is occupied by the campuses of the University of Manchester, Manchester Metropolitan University, and the Royal Northern College of Music. To the south of the university's Oxford Road campus a considerable area is occupied by a group of contiguous hospitals including Manchester Royal Infirmary, to the west of which is Whitworth Park.

In medieval times, the district was known as Chorlton Row and was a township of the ancient parish of Manchester in the Salford Hundred of Lancashire. Towards the end of the 18th century, it developed as a residential suburb of Manchester and in the extreme north of the township a number of cotton mills were established. In 1820 the parish church of All Saints was built. Development began in 1793–94 and most of the important streets were given impressive names, Oxford Street, Cambridge Street and Grosvenor Street. 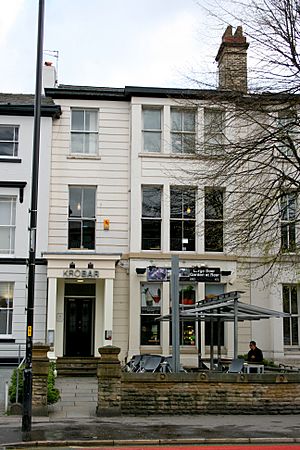 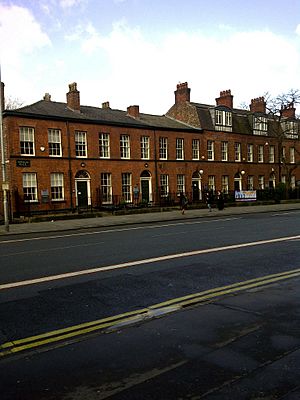 In 1830, the town hall on Cavendish Street was built to the designs of Richard Lane. On the creation of the municipal borough of Manchester in 1838 the township was absorbed into the borough. At this time the southern area was still partly rural with some larger dwellings of wealthy people (e.g., John Owens in Nelson Street). After the Poor Law Reform of 1834 the district became part of the Chorlton Poor Law Union and the offices of the Board of Guardians were built in Cavendish Street (these are now the Ormond Building of the Metropolitan University). The arrival of Owens College in 1873 was the beginning of a different kind of development leading to the academic campus of today.

Though most of the township was originally middle class in character by the early 20th century it was very much a working class district. The housing conditions were described in 1931 by the Manchester and District Social Survey Society. 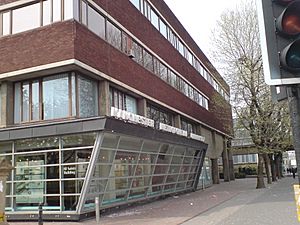 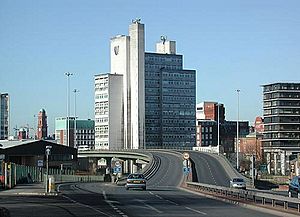 The historic boundaries are as described in the introductory text: however those who think more about postal areas and university campuses often include the area east of Boundary Lane and west of the Dental Hospital in Hulme because it has M15 postcodes and think of Greenheys (now in Moss Side ward) as an area of Moss Side rather than Chorlton on Medlock. Much of the area can also be included in a district referred to as "Central Manchester" in modern directories and publicity. Once the River Medlock is crossed, that is Manchester city centre, which includes the Sackville Street campus of the University (or confusingly "North Campus" rather than "South Campus"). A large area of Chorlton on Medlock south-west of this is occupied by the Manchester Metropolitan University. The M13 postcode district comprehends Ardwick and Chorlton on Medlock (roughly speaking).

Brunswick is an area around Brunswick Street in Chorlton-on-Medlock, south of Manchester Piccadilly railway station and north of Manchester Royal Infirmary: its western edge is dominated by campus buildings of Manchester University, east of Oxford Road. These have all been built since 1957, and several large new buildings have appeared since the inauguration of the present University in 2004, such as University Place on the site of the former Mathematics Building.

Chorlton on Medlock is crossed by the Mancunian Way (opened 1967), running west to east through its northern part. The main routes through the suburb to south Manchester are (west to east) Cambridge Street (leading to Higher Cambridge Street, Lloyd Street North and Upper Lloyd Street), Oxford Road (leading to Wilmslow Road; the busiest route, both for private and public transport), and Upper Brook Street (dual carriageway continuing from Princess Street and leading to Anson Road). 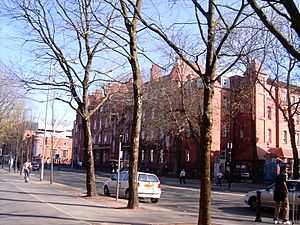 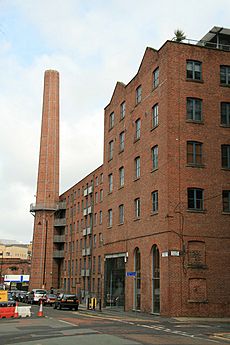 The front of the former Chorlton-upon-Medlock Town Hall can be seen at its original location on Cavendish Street at All Saints. The building, with its Doric portico, dates from 1830–31 and was designed by Richard Lane. The original interior was removed and a new structure added to the rear in 1970. A red plaque on the building commemorates the Fifth Pan-African Congress, which was held there from 15–21 October 1945. Decisions taken at that conference led to independence for a number of African and Caribbean countries. In Nelson Street the former home of the Pankhurst family is now the Pankhurst Centre. The Ormond Building of the Manchester Metropolitan University was originally the home of the Chorlton Union Board of Guardians (responsible under the 1834 Poor Law for most of what is now south Manchester). Next to the town hall building is the original building of the Manchester College of Art (1880–81: architect George T. Redmayne) in a Gothic revival style. 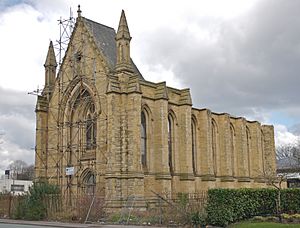 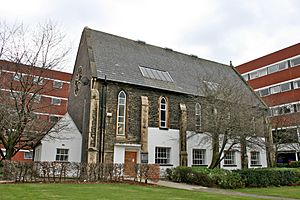 The parish church of All Saints (1820) and the earlier Church of St Luke (founded before 1804 but a new church was built by John Lowe in 1865; part of Old Chorlton Hall was used as the rectory) (to the east) have been demolished as have several other Anglican churches in this area. Anglican churches which are disused include St Stephen's (E. H. Shellard, 1853), St Paul's (Clegg & Knowles, 1862), and St Ambrose (H. C. Charlewood, 1884): these have all been demolished apart from St Ambrose which was used by the University of Manchester as an Islamic prayer room) the prayer room is now (in 2012) at the McDougall Centre, Burlington Street). In Greenheys there was formerly an Anglican church of St Clement on Denmark Road (architect Henry R. Price, 1881, decorated by John Lowe, 1886).

The oldest Roman Catholic church in Chorlton-on-Medlock was the Church of the Holy Name on Oxford Road (built between 1869 and 1871), a fine example of the work of the architect Joseph Aloysius Hansom. St Augustine's, Granby Row (demolished in 1908 to allow expansion at the Municipal College of Technology) was replaced by a second St Augustine's in York Street, Chorlton-on-Medlock (ruined by German bombing in 1940 during World War II): its successor is at Lower Ormond Street on the Manchester Metropolitan University campus in a building which serves also as a chaplaincy to the University. This church was built in dark brick to the designs of Desmond Williams & Associates in 1967–68. It replaced an earlier church of the Holy Family which was at first a chapel-of-ease to St Augustine's, then an independent parish, but a chapel-of-ease again from 1908 to 1940 when it became the parish church of St Augustine's parish.

The Armenian church in Upper Brook Street was the first purpose-built Armenian church in Western Europe. It is dedicated to the Holy Trinity and opened at Easter 1870. The architects were Royle & Bennett, 1869–70, and they chose an eclectic neo-Gothic style. At the east end is a rounded apse and the interior is simple though the altar is elaborate.

There were also many Nonconformist chapels (most of them now demolished) such as the Cavendish Street Congregational Church, Cavendish Street (architect Edward Walters, 1847-48), the Union Chapel, Oxford Road and a Presbyterian chapel at All Saints. The chapel in Cavendish Street was a particularly fine neo-Gothic building but was demolished in the early 1970s to allow expansion by Manchester Polytechnic. It has replaced an earlier chapel in Mosley Street. The Welsh Baptist Chapel, on Upper Brook Street, was designed in the early 19th century by Sir Charles Barry, who designed the Palace of Westminster shortly afterwards, and in Greenheys there was a German Protestant Church in Wright Street (ca. 1871).

There are two mosques in Chorlton-on-Medlock, the Salimiya Mosque and the Islamic Academy of Manchester, Upper Brook Street (in the building of the former Welsh Baptist Chapel). The former church of St Ambrose was used by the University of Manchester as an Islamic prayer room for several years but the prayer room is now (in 2012) at the McDougall Centre, Burlington Street). There is another prayer room at the Manchester Metropolitan University in Oxford Road. 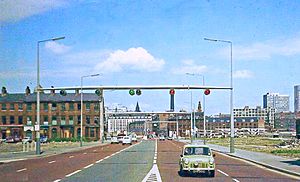 Chorlton on Medlock is crossed by the Mancunian Way (opened 1967), running west to east through its northern part. The main routes through the suburb to south Manchester are (west to east) Cambridge Street (leading to Higher Cambridge Street, Lloyd Street North and Upper Lloyd Street), Oxford Road (leading to Wilmslow Road; the busiest route, both for private and public transport), and Upper Brook Street (dual carriageway continuing from Princess Street and leading to Anson Road). 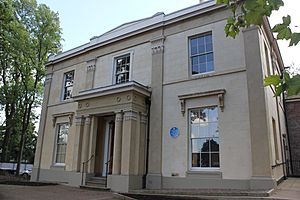 84 Plymouth Grove, home of William and Elizabeth Gaskell, from 1850 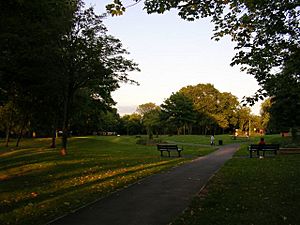 All content from Kiddle encyclopedia articles (including the article images and facts) can be freely used under Attribution-ShareAlike license, unless stated otherwise. Cite this article:
Chorlton-on-Medlock Facts for Kids. Kiddle Encyclopedia.