Moss Side facts for kids

Moss Side is an inner-city area and electoral ward of Manchester, England. It lies 1.9 miles (3.1 km) south of Manchester city centre and had a population of 18,902 at the 2011 census. Moss Side is bounded by the neighbourhoods of Hulme to the north, Chorlton-on-Medlock, Rusholme and Fallowfield to the east, Whalley Range to the south, and Old Trafford to the west.

In and around Moss Side are the public parks of Whitworth Park and Alexandra Park. The east of Moss Side is close to the Manchester and Manchester Metropolitan universities and is a popular residential area for students. Between 1923 and 2003, Manchester City played at Maine Road in Moss Side.

Historically a part of Lancashire, Moss Side was formerly a rural township and chapelry within the parish of Manchester and hundred of Salford. Thought to be named after a great moss which stretched from Rusholme to Chorlton-cum-Hardy, the earliest mention of the area is in 1533 when it contained part of the estates of Trafford. Moss Side is described in the opening chapter of Elizabeth Gaskell's Mary Barton as a rural idyll with a 'deep clear pool' and an old black and white timber framed farmhouse, later identified as Pepperhill Farm. Following the Industrial Revolution there was a process of unplanned urbanisation and a rapid increase in population size. The population in 1801 was 151 but by 1901 this had increased to 26,677. The industrial growth of the area resulted in a densely populated area, so much so, that a part of the township of Moss Side was amalgamated into the expanding city of Manchester in 1885, with the rest joining in 1904.

Mass development in Moss Side occurred in the late 19th and early 20th centuries when large numbers of red brick terraced houses were built, and soon attracted numerous Irish immigrants and other working people.

Manchester City F.C. moved to a new stadium on Maine Road on 25 August 1923, having moved from Hyde Road, Ardwick; on its opening it was one of the most capacious sports stadiums in the United Kingdom, capable of holding up to 85,000 spectators. The club would play there for the next 80 years. 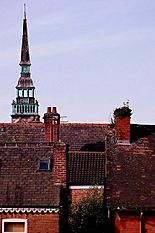 Bell tower of former Greenheys School in Moss Side

During the Manchester Blitz in the Second World War many of the terraced houses were damaged by German bombing on the night of 22/23 December 1940.

Migrants from the Indian subcontinent and Caribbean settled in the locality during the 1950s and 1960s, and by the 1980s Moss Side was the hub of Manchester's Afro-Caribbean community.

During the 1960s and early 1970s, Manchester City Council demolished many of the Victorian and Edwardian terraced houses to the west of Moss Side and replaced these with new residential properties.

In 1981, the Moss Side area was one of England's inner city areas affected by a series of riots. Analysts trace the 1970s origins of Manchester's gang crime to social deprivation in the south-central part of the city — Hulme, Longsight and Moss Side — where the activity of the underground economy encouraged a trade in illegal narcotics and firearms contributing to Manchester's later nickname of "Gunchester". "Turf wars" between rival drugs 'gangs', resulted in a high number of fatal shootings. During what has been termed the Madchester phase of the history of Manchester, narcotic trade in the city became "extremely lucrative" and in the early 1990s a gang war started between two groups vying for control of the market in Manchester city centre — the 'Cheetham Hill Gang' and The 'Gooch Close Gang', in Cheetham Hill and Moss Side, respectively. There were several high-profile shootings associated with gangs and drugs in this area during the 1990s and into the 21st century. The last gang related gun fatality in Moss Side was in 2006. Aided by the work of Xcalibre, the Greater Manchester Police's task force, founded in 2004, and the multiagency Integrated Gang Management Unit, gang related shootings in the area have fallen by about 90% in recent years.

Many of the flats in neighbouring Hulme were demolished in the 1990s to make way for new low rise homes. Housing on the Alexandra Park Estate in the west of Moss Side has been renovated and the streets redesigned to reduce the fear of crime.

Moss Side lies either side of the A5103 (Princess Road), the main road out of Manchester towards Northenden, Manchester Airport, the M56 motorway and Chester. Parallel to this is Alexandra Road, which continues as Alexandra Road South past Alexandra Park (Alexandra Road was formerly one of two main shopping streets in Moss Side). Landmarks on Princess Road are the Royal Brewery and the Princess Road Bus Depot, built originally for the tramways in 1909 and used by Stagecoach Manchester until 2010.

Princess Road and Princess Park in Moss Side.

The western border of the Moss Side Ward is bounded in part by Withington Road. Parts of the eastern border are bounded by Wilmslow Road, where it meets Whitworth Park, and Parkfield Street. To the south, the border includes Alexandra Park, Horton Road and part of Platt Lane. To the north, the ward border mainly runs along Moss Lane East.

The built environment of Moss Side is broadly characterised as a high-density residential area. This includes mainly Victorian and Edwardian terraces to the east and centre, with more recent developments, primarily the Alexandra Park Estate, built in the 1970s to the west of Princess Road.

The Moss Side Sports and Leisure Complex (north of Moss Lane West) was upgraded for the 2002 Commonwealth Games and has a gym and a variety of other sporting facilities. 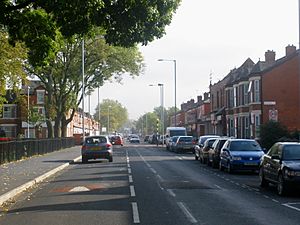 Great Western Street runs through the centre of Moss Side. 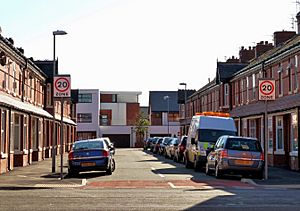 Wykeham Street with the Maine Place development in the background

Moss Side has benefited from very substantial redevelopment and regeneration since the mid-1990s including improvement of the existing housing and residential environment along with several major housing projects currently in process or nearing completion. There has been considerable renovation of existing housing stock, such as local terrace housing and the Alexandra Park Estate, .

A large site on Great Western Street has been developed by Moss Care Housing Ltd. to provide a mix of 2,3 and 4 bedroom properties, with different tenures, some rental and others offered as shared ownership or for sale.

The former Manchester City F.C. Maine Road site is in the process of redevelopment, marketed as Maine Place, primarily as 2, 3 and 4 bedroom houses but including a limited number of flats, for sale or shared ownership, with many homes completed and occupied, along with a primary school, now open, and a health centre planned.

The Bowes Street area, adjoining Princess Road, has been redeveloped, at the cost of £17 million, including the renovation or transformation, with some new build, of 155 properties in five streets. Reported as being 'built or converted to a very high standard of eco-friendliness, with solar panels, water butts, thermal “skin” insulation and sun pipes being used' and aiming to offer 2, 3 and 4 bedroom homes with 'low running costs', the development plan states its aim, along with that at Maine Road, as being to provide mixed type "higher specification" housing, "diversify tenure" and promote the area as a "neighbourhood of choice".

Marketed as "Infusion Homes", the properties were launched on the market on 26 February 2011. On 9 May, sales demand was reported as strong, with 60% of the properties having been sold. On 11 May the development was awarded the UK's Best Affordable Housing Scheme at the national Housing Excellence Awards 2011

Land adjacent to the development, formerly occupied by Bilsborrow primary school and the Stagecoach bus depot, both demolished as part of regeneration, remains vacant with no clear future use at present, though local community groups have short term plans to utilize the space for a gardening/food growing project.

The impact of regeneration and redevelopment in changing perceptions of the area was demonstrated in The Guardian Saturday magazine, dated 8 September 2012, when Moss Side appeared in the long running Let's Move To series.

In 2007, the Moss Side ward was estimated to have a total population of 17,537, of which 8,785 were male and 8,752 were female. Moss Side is noted as an area with a greater population density and a faster population growth than other areas of the city of Manchester, with an increase of 17.4% between 2001 and 2007. The "Moss Side ward profile: Version 2010/1", produced by Manchester City Council, points to a significant shift in the demography of Moss Side, in terms of age structure, from the middle of the last decade and projected into the middle of this decade, with more in the under 10 and 25–35 age groups, suggesting an increase in families with younger children. Other sources indicate an accompanying change in Moss Side's ethnic population, with an estimated marked percentage increase in the Afro-Caribbean, Indian, Somali, Chinese and Eastern European communities between 2007 and 2015.

Changing age structure of the population 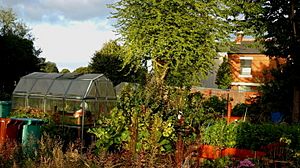 Moss Side has longstanding Afro-Caribbean and South Asian populations. There has also been a recent increase in residents from other communities, including those from Somalia and Eastern Europe.

A number of local community and voluntary groups provide social support, as well as cultural and leisure opportunities to each of these communities. These organisations and institutions include The West Indian Sports and Social Club, the African and Caribbean Mental Health Service, and the African-Caribbean Care Group, which serve the Afro-Caribbean community. The Caribbean Carnival of Manchester is also held in the area every August, usually in Alexandra Park. The Indian Senior Citizens group provides support for the elderly within the Indian community. Additionally, the Somali Bravanese Sisters and the Polish School Manchester cater to the Somali and Polish communities, respectively.

The Reno was a late night club at the junction of Princess Road and Moss Lane East in Moss Side. The Reno and the Nile (upstairs from the Reno) were Manchester's most famous drinking clubs for the city's West Indian community and played a key role in the development of black culture in the city.

Moss Side is also home to a population with a keen interest in green politics and sustainable living, with initiatives such as the Moss Cider Project and Carbon Co-op. Moss Side Community Allotment states its aim as involving volunteers in growing and making available locally produced organic food. A local disused space, known as 'The Triangle', involved a community group in regenerating wasteground into a communal garden. Other groups, such as Bowes Street Residents Association have sought to 'green' the area through the use of 'alley gating' and planting in contained alleys. The 'meanwhile garden' on the site of the former bus depot is currently being turned into an apple orchard. With the aim of changing perceptions of the area, a group of local residents acting as 'community ambassadors' was also formed in January 2012.

The Millennium Powerhouse youth service caters for 8- to 25-year-olds and includes a music studio, fitness studio, dance studio, sports hall and offers information and advice to young people, including a library, along with recreational and sport groups. Windrush Millennium Centre, which provides adult education and other community facilities, is situated on Alexandra Road. Additionally, the area features a number of Polish and Indian restaurants and eateries. It has also in recent years seen the opening of several Somali cafes. 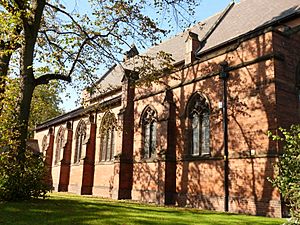 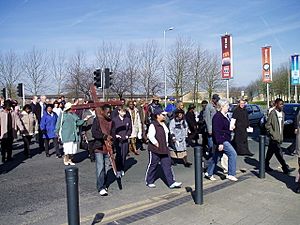 The original St James's Church (Church of England), Princess Road, was built in 1887–88 (architect John Lowe): of red brick in the Perpendicular revival style. This has now been replaced by a modern brick building which also contains offices used by local community groups.

There are two Roman Catholic churches, the Church of Divine Mercy, a Polish church founded in 1961, which is on Moss Lane East; and the Church of Our Lady (founded 1949). The Polish church occupies a former Methodist chapel built about 1875 in the Neo-Gothic style and contains stained glass windows commemorating victims of the Holocaust. It is a few yards south of Christ Church.

The former Swedenborgian Church also dates from 1888 and is Neo-Gothic in style.

All content from Kiddle encyclopedia articles (including the article images and facts) can be freely used under Attribution-ShareAlike license, unless stated otherwise. Cite this article:
Moss Side Facts for Kids. Kiddle Encyclopedia.