As a result of the elongated floor plan, the structure is one of the thinnest skyscrapers in the world with a height to width ratio of 10:1 on the east-west façade but is noticeably wider on the north-south façade. A blade structure on the south side of the building acts as a façade overrun accentuating its slim form and doubles as a lightning rod. The skyscraper is visible from ten English counties on a clear day. The top-floor penthouse offers views of Greater Manchester, the Cheshire Plain, the Pennines, the Peak District and Snowdonia. The tower is known for emitting a loud unintentional hum or howl in windy weather, believed to emanate from the glass 'blade' atop the building. The hum has been recorded as a B below middle C and can be heard over large parts of the locality.

Architectural response to the skyscraper is polarised and interpretations vary. The cantilever bears the load of the north façade symbolically representing the historical strength and revival of post-industrial Manchester following economic decline in the 1980s and the 1996 Manchester bombing. Some questioned its dominant appearance over the city – particularly over listed buildings with one author going as far to say the skyscraper instantly "torpedoed" any possibility of Manchester becoming a UNESCO World Heritage city - a status Manchester was previously on the United Kingdom shortlist for due its industrial past. Others feel its dramatic appearance and peculiarity is reflective of Manchester and that the Beetham Tower symbolises Manchester's reinvention as a post-industrial city. Nevertheless, it has received praise and was awarded the best tall building in the world in 2007 by the Council for Tall Buildings and Urban Habitat. 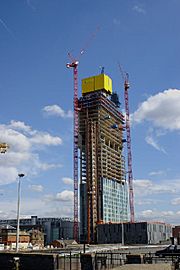 The site was next to a redundant section of railway viaduct. With the support of English Heritage and the recommendation of the planning department, the Beetham Organisation submitted a planning application to Manchester City Council in July 2003. Planning permission was granted in October 2003.

The skyscraper was part of Manchester's regeneration, and by the end of 2003 before construction had started, 206 of its 219 flats and 4 of its 16 penthouses had been pre-sold. The skyscraper was built when much of the United Kingdom was experiencing an economic boom and high-rise towers were being built in many English cities.

Ground and foundation works commenced at the beginning of 2004 and construction started in April 2004. By August 2004, work on its twin concrete cores had started and the structure was rising at a steady rate. One of the cores reached 410 feet (120 m) at the end of July 2005, at which point the building became the tallest UK skyscraper outside London. 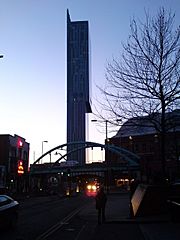 The Beetham Tower, one of the world's slimmest skyscrapers, has a width to height ratio of 1:10. 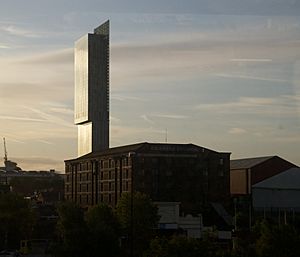 Light is used to accentuate the tower's crystalline form throughout the course of the day.

The building is located on a narrow site on Deansgate at the junction with Great Bridgewater Street and Liverpool Road. Its tall rectangular form maximises the available space. On the 23rd storey a cantilever projects by 13 feet (4 metres) increasing its floor space and giving the tower definition. On the roof is a glass overrun, described as a "glass blade" by the architect. The ten-metre blade accentuates the flat south façade, contrasting with the north façade, and doubles as a lightning rod.

The tower was built by Carillion using post-tensioned flat slab concrete construction techniques and was the first structure in the UK to use the Doka SKE 100 automatic climbing system and trapezoidal windshield.

Piling foundations are typically preferred for skyscrapers, however Manchester's sandstone substrata meant a raft foundation. The 2.5 metre thick raft foundation sits 9 metres below the ground level. Approximately 57,000 tonnes of concrete and 6,000 glass panes for the curtain wall structure were required. Over 8,000m2 of rigid insulation board by Kingspan was used to reduce heat loss.

The skyscraper's curtain wall structure is clad in glass and elements were added to counter excessive light. Louvres on south-facing windows allow for the control of daylight and sunlight into its interior. On the west and east-facing sides, aluminium strips which are noticeable from ground level project outwards to provide shading from the sun. The louvres on the south façade alter its consistency and appearance when some are open and others are closed. They stop excessive passive solar gain. Ultraviolet light hits the glass and is changed to infrared which generates heat through radiation creating overheating.

Floors 1 to 22 are occupied by the 279-bedroom, four-star Hilton Manchester Deansgate Hotel. The 23rd floor has a four-metre cantilevered overhang with two glass windows in its floor, overlooking the ground from the skybar, Cloud 23, the only such bar in Manchester. The floor has a bar and lounge operated by Hilton. Floors 25 to 47 floors are occupied by residential apartments. A 12-storey office block is planned next to the tower, with 6,506 square metres of floor space. The hotel has a four-storey annex, containing a swimming pool, ballroom, conference rooms and coffee shop.

The architect, Ian Simpson, lives in the top-floor penthouse, the highest living space in Britain after surpassing Lauderdale Tower at the Barbican Estate in London upon opening in 2006. It cost £3 million and occupies the top two storeys. It has a semi-indoor garden containing 21 four-metre-tall olive, lemon and oak trees, shipped from Italy and lifted into place with cranes through a small aperture in the roof before it was glazed in 2006.

The Hilton Manchester Deansgate occupies space up to level 22 and a four-metre cantilever marks level 23 where the Cloud 23 bar is located. Above this level are apartments from level 25 to the triplex penthouse apartment on level 47.

Beetham claimed 90% of the residences were sold before construction began in 2004. The Daily Telegraph claimed that 55 of 219 apartments were waiting to be let and a further 30 were unsold in September 2008. In September 2010, the Manchester rental market had improved and only two apartments out of 219 were unoccupied awaiting interior fit-out. Prices for an apartment ranged from £200,000 to £750,000 in 2011. In 2012 demand for apartments exceeded supply and bidding wars broke out.

The tower has views over the set of Coronation Street from the north and west façade. The tower also has expansive vistas over Snowdonia, the Pennines, the Peak District, the Cheshire Plain, Liverpool Cathedral Blackpool Tower, and Jodrell Bank Observatory on a clear day. 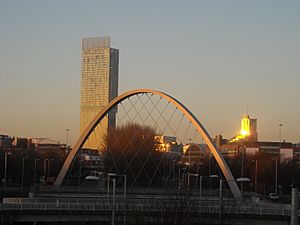 A humming noise emanating from the tower has been heard in Hulme. (Hulme Arch Bridge pictured in foreground)

The building has become notorious for an intermittent hum, or howling, which is heard in windy weather, emanating from the roof's glass blade, and first reported in May 2006 – just weeks after the tower opened. The skyscraper was intended to be 50 storeys high rather than 47, but wind load tests showed that it would sway too much because of its slender shape and the 'glass blade' façade overrun caused by the height reduction has been blamed for the noise. The sound has been heard from about 300 metres away. It is close to the standard musical pitch of B3 (approximately 246.94 Hertz) and has been compared to a "UFO landing". The noise affected production of Coronation Street.

Work to reduce or eradicate the noise took place in 2006, 2007 and 2010. Foam pads were installed in 2006, aluminium nosing in 2007 and further work done in February 2010, but attempts to eradicate the noise permanently have been unsuccessful. In January 2012, after strong winds caused very loud humming, the architect, who lives at the top of the building, apologised. It was suggested that the decorative glass blade could be removed to solve the problem. As of 2015, the noise issue still remains, and the building now has its own parody accounts on Twitter - 'Angry Beetham' and 'Happy Beetham' - who each claim responsibility when the howling begins. The humming noise occurred again during Storm Doris in February 2017.

The Beetham Tower featured in television programmes Vertical City (2007) for More 4, Britain From Above for BBC One (2008) and Time Travel (2010) for the National Geographic Channel. It is depicted in the opening titles of numerous television programmes – including The Street, Coronation Street and the Manchester sequence of ITV Sport's England football coverage.

Scenes for series 2 of Scott & Bailey were filmed in the reception area of the hotel, although the scenes were set in Bristol. AMC Cinemas can be seen in the outdoor shots.

All content from Kiddle encyclopedia articles (including the article images and facts) can be freely used under Attribution-ShareAlike license, unless stated otherwise. Cite this article:
Beetham Tower, Manchester Facts for Kids. Kiddle Encyclopedia.