Deansgate is a main road (part of the A56) through Manchester City Centre, England. It runs roughly north–south in a near straight route through the western part of the city centre and is the longest road in the city centre at over one mile in length.

Deansgate is one of the city's oldest thoroughfares. In Roman times its route passed close to the Roman fort of Mamucium and led from the River Medlock where there was a ford and the road to Deva (Chester). Along its length were several civilian buildings and a mansio in the vicinity of the Hilton Hotel. Part of it was called Aldport Lane from Saxon times. (Aldport was the Saxon name for Castlefield.) Until the 1730s the area was rural but became built up after the development of a quay on the river.

The road is named after the lost River Dene, which may have flowed along the Hanging Ditch connecting the River Irk to the River Irwell, at the street's northern end. ("Gate" derives from the Norse gata, meaning way).

By the late 19th century Deansgate was an area of varied uses: its northern end had shopping and substantial office buildings while further south were slums and a working class area around St John's Church (St John Street remaining upper middle class). The Wood Street Mission began to address the social problems in 1869 and its work continues in a very different form. From Peter Street southwards the eastern side was dominated by the viaducts of the Great Northern and Manchester South Junction Railways, while the Rochdale Canal crossed below Deansgate to connect with the other waterways beyond. In the late 20th century Deansgate was home to the head office of the Manchester Evening News newspaper, now replaced by part of the Spinningfields development.

Deansgate begins at Victoria Street, a 19th-century creation. Its east side was occupied by the Victoria Buildings built on a triangular site by Manchester Corporation in 1876 but demolished in a bomb raid in the Manchester Blitz in December 1940. A statue of Oliver Cromwell at the northern corner commemorated Manchester's support for Parliament in the English Civil War. The statue was a gift to the city by Mrs Abel Heywood in memory of her first husband, Thomas Goadsby and was the first large statue of Cromwell to be raised in the open anywhere in England.

At the northern end of Deansgate is Victoria Street, on which lies Manchester Cathedral, and at the southern end is Deansgate railway station. At this point Deansgate connects with Bridgewater Viaduct and Chester Road (Whitworth Street West meets it at this point). The section to the south of Peter Street was known as Aldport Street until the end of the 18th century.

The street contains many shops including a House of Fraser department store known as Kendals from the 1830s until 2005, and Waterstones along with many public houses and bars including the Moon Under Water, formerly the Deansgate Cinema (or ABC Deansgate). At 820 square metres (8,800 sq ft), able to accommodate 1,700 customers, and employing 60 staff, it has been listed in The Guinness Book of Records as the largest public house in Britain. Elliot House was the Manchester Registry Office and before that the offices of the corporation's Education Department.

The northern end of the street adjoined the Shambles and was badly damaged in the 1996 Manchester City Centre bombing. The area was redeveloped and houses several new buildings, including No. 1 Deansgate and the Manchester branch of Harvey Nichols. Other buildings in the Deansgate area include the Royal Bank of Scotland, the Beetham Tower, and the redeveloped Great Northern Warehouse. Historic buildings include the John Rylands Library and the Barton Arcade shopping mall. The disused Manchester and Salford Junction canal runs directly underneath Deansgate below the Great Northern Warehouse. 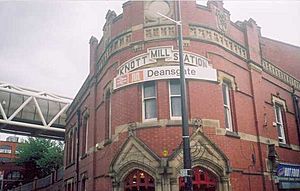 Today, the main transport links on Deansgate are the National Rail and Manchester Metrolink stations and a number of bus routes, including the Metroshuttle services. Deansgate Station was opened at Knott Mill on 20 July 1849 by the Manchester, South Junction and Altrincham Railway. It is linked to Deansgate-Castlefield Metrolink station on the Metrolink system.

In the first half of the 20th century, Deansgate was a route for trams operated by Manchester Corporation Tramways, and subsequently carried numerous bus services. During the 1970s, many bus routes were diverted or separated into two services terminating in the city centre and adjoining streets such as King Street were pedestrianised.

In 2009, there were calls for traffic to be banned on Deansgate and for it to be pedestrianised. The calls were triggered in response to road works that closed parts of Deansgate. Some argued that the disablement of a major traffic route in the city centre could have a damaging economic effect while others argued that a vehicle-free Deansgate would attract more shoppers. Victoria Street, the short section at the North end of the road by Manchester Cathedral has been pedestrianised. in 2019 Extinction Rebellion occupied a section of the road from St Mary’s Gate to John Dalton Street for four days, with tents and organised talks on climate change, sustainable living and resistance. This reignited calls for it to be pedestrianised. 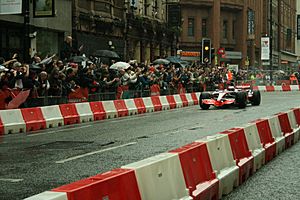 In 2001 the inaugural Great City Games took place on Deansgate, which featured a 150-metre sprinting track. The event has become an annual fixture on the Great Manchester Run weekend during mid-May. Usain Bolt set a world record for the 150 m straight in 2009 and Tyson Gay ran the 200 m straight in record time in 2010.

All content from Kiddle encyclopedia articles (including the article images and facts) can be freely used under Attribution-ShareAlike license, unless stated otherwise. Cite this article:
Deansgate Facts for Kids. Kiddle Encyclopedia.