An eight-time Olympic gold medallist, Bolt is the only sprinter to win Olympic 100 m and 200 m titles at three consecutive Olympics (2008, 2012 and 2016). He also won two 4 × 100 relay gold medals. He gained worldwide fame for his double sprint victory in world record times at the 2008 Beijing Olympics, which made him the first person to hold both records since fully automatic time became mandatory.

His achievements as a sprinter have earned him the media nickname "Lightning Bolt", and his awards include the IAAF World Athlete of the Year, Track & Field Athlete of the Year, BBC Overseas Sports Personality of the Year (three times) and Laureus World Sportsman of the Year (four times). Bolt retired after the 2017 World Championships, when he finished third in his last solo 100 m race, opted out of the 200 m, and pulled up in the 4×100 m relay final.

Bolt was born on 21 August 1986 to parents Wellesley and Jennifer Bolt in Sherwood Content, a small town in Jamaica. He has a brother, Sadiki, and a sister, Sherine. His parents ran the local grocery store in the rural area, and Bolt spent his time playing cricket and football in the street with his brother, later saying, "When I was young, I didn't really think about anything other than sports." As a child, Bolt attended Waldensia Primary, where he began showing his sprint potential when he ran in his parish's annual national primary school meet. By the age of twelve, Bolt had become the school's fastest runner over the 100 metres distance.

Upon his entry to William Knibb Memorial High School, Bolt continued to focus on other sports, but his cricket coach noticed Bolt's speed on the pitch and urged him to try track and field events. Pablo McNeil, a former Olympic sprint athlete, and Dwayne Jarrett coached Bolt, encouraging him to focus his energy on improving his athletic abilities. The school had a history of success in athletics with past students, including sprinter Michael Green. Bolt won his first annual high school championships medal in 2001; he took the silver medal in the 200 metres with a time of 22.04 seconds. McNeil soon became his primary coach, and the two enjoyed a positive partnership, although McNeil was occasionally frustrated by Bolt's lack of dedication to his training and his penchant for practical jokes.

When Bolt was a boy, he attended Sherwood Content Seventh-day Adventist Church in Trelawny, Jamaica, with his mother. His mother did not serve pork to him in accordance with Adventist beliefs.

On August 16th, 2009, he went to the 12th World Championships in Athletics and broke his own world record in the 100 meter race. He ran that race in 9.58 seconds. Surprisingly, in this race, he didn't try his hardest. He looked around for the last five meters.

On August 28th, 2011, he ran in the 13th World Championships in Athletics in Daegu, South Korea. He made a false start in the 100 meter race and was disqualified.

In 2017, his gold medal for the 2008 relay was disqualified because his teammate Nesta Carter had used drugs. He had to give up his gold medal.

He is known to be a fan of the English Premier League soccer club, Manchester United F.C. He watched their games in person. He also met the coach and players.

In November 2019, he followed up with another compilation called the 'Immortal Riddim' that included tracks from Vybz Kartel, Masicka, Munga Honorable and Christopher Martin.

In early January 2021, Bolt released a single titled Living The Dream with his childhood friend and manager Nugent 'NJ' Walker. 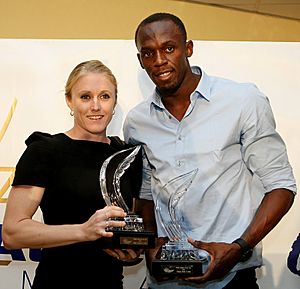 All content from Kiddle encyclopedia articles (including the article images and facts) can be freely used under Attribution-ShareAlike license, unless stated otherwise. Cite this article:
Usain Bolt Facts for Kids. Kiddle Encyclopedia.