The Upper Brook Street Chapel, also known as the Islamic Academy, the Unitarian Chapel and the Welsh Baptist Chapel, is a former chapel with an attached Sunday School on the east side of Upper Brook Street, Chorlton-on-Medlock, Manchester, England. It is said to be the first neogothic Nonconformist chapel, having been constructed between 1837 and 1839. It was designed by Sir Charles Barry, who later went on to design the Palace of Westminster.

A listed building since 3 October 1974 (currently Grade II*), it is owned by Manchester City Council and is on the Buildings at Risk Register, rated as "very bad". It was partially demolished in 2006. The Victorian Society recently placed the building on a list of ten most threatened buildings in England and Wales.

The chapel was designed by Sir Charles Barry, shortly before he designed the Palace of Westminster. It was constructed between 1837 and 1839 out of sandstone, with a slate roof. It is in English neogothic style. The building has seven narrow bays, with buttresses and a lancet in each bay. The west end has a giant moulded archway, with an arched doorway at the ground floor with a window above. On the east end there is a rose window. The corners are square, with pinnacles. The inside of the chapel had galleries on three sides, and a ribbed, vaulted ceiling. The attached two-storey Sunday School is in the same style as the chapel, and has a triple-gabled north side, with large arched windows on the first floor. It also has a canted apse on the west end, and a lean-to porch. The building was listed on 3 October 1974, and is currently classed as Grade II*.

The building marked a charge in the style of Nonconformist worship locations. Previously these were mostly built with brick, and were plain, with the grander tending towards Greek architecture. Said to be the first neogothic Nonconformist chapel, Manchester's Unitarian Chapel was preceded by the Congregationalists' Congregational Chapel in March, Cambridgeshire, which was constructed in 1836 and is also in the neogothic style. Chapels built following the construction of these two resembled parish churches more than the former style.

The chapel replaced the Mosley Street Chapel (built 1789, demolished 1836) upon its completion for baptisms, burials and marriages. It was originally constructed for the Unitarians. The chapel was used for burial rites until 1882, the chapel had a graveyard from the outset, to both the north and south sides of the chapel. Restrictions were placed on this in 1856 and prohibited in 1882 except for the removal of remains from graves on the north side to brick vaults on the south side of the chapel. Baptisms were performed until at least 1912, and marriages until at least 1916. Ministers at the chapel include John James Tayler (until 1853), William Henry Herford (1866–70), Philip Wicksteed (circa 1890), John Trevor (1890–91, left to start The Labour Church) and Edward Walker Sealy (1910-???).

The chapel was sold in 1928 due to changes in the district, and was subsequently used as a Welsh Baptist Chapel. The chapel was then used as a Jehovah's Witnesses Kingdom Hall in the early 1970s. The most recent use of both the chapel and former Sunday School was for the Islamic Academy of Manchester between 1974 and 2006, when it was used as a mosque, teaching centre and for outreach work in the Asian community. The chapel is currently vacant, with the Islamic Academy occupying the Sunday School. The building has been owned by Manchester City Council since the 1970s, who purchased land alongside Upper Brook Street with the aim of constructing a large motorway into Manchester, which was never realised. 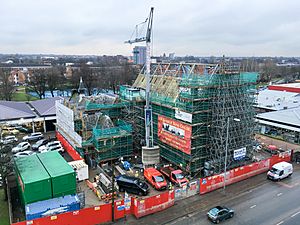 The Chapel being redeveloped in 2017

Parts of the chapel were demolished at the start of 2006 on safety grounds, with scaffolding holding up some other sections. As of March 2008 the building has very little roof, with the walls, floors and ceilings in poor condition. The annex was also declared unsafe, but has since been reoccupied.

A spokesperson for Manchester City Council said: "The Welsh Baptist Chapel is in poor condition due to the low standard of its original construction. It has been empty for some years while attempts have been made to achieve a sympathetic redevelopment of the site and secure the building's long-term future." An unsuccessful bid to the Heritage Lottery Fund for funding to repair the building was made by the Islamic Academy in 2003. In 2001 and 2005 the City Council commissioned structural advice regarding the building, prior to removing most of the roof, with the agreement of English Heritage. The building is in need of £500,000 for emergency repairs, as well as an extra £700,000 to make it fully functional.

The chapel is currently on the Buildings at Risk Register, rated as "very bad". The Victorian Society recently placed the building on a list of ten most threatened buildings in England and Wales.

In October 2010 Manchester City Council revealed that it was in discussion with a developer to renovate the building and bring it back into use. In August 2013 the council received a planning application from the Church Converts (Manchester) to repair the building and convert it into apartments; the application was granted in February 2014. The redevelopment by CZero Developments will consist of 73 private apartments in both the chapel and the Sunday school, with the redevelopment due to be completed by Summer 2017.

All content from Kiddle encyclopedia articles (including the article images and facts) can be freely used under Attribution-ShareAlike license, unless stated otherwise. Cite this article:
Upper Brook Street Chapel, Manchester Facts for Kids. Kiddle Encyclopedia.