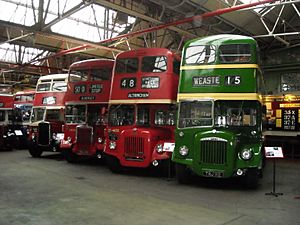 A former North Western Road Car, two Manchester Corporation buses and one Salford Corporation all inside the Museum of Transport, Manchester and in their original liveries.

The museum holds a sizeable collection, one of the largest of its kind in the UK. Due to the size of the building, some vehicles have to be kept off-site, with exhibits changed around every so often. In addition, vehicles often attend events around the country in the summer months.

The museum, owned by Transport for Greater Manchester, was established at Boyle Street, Cheetham Hill, in 1977. It opened to the public on 27 May 1979. The day-to-day running of the museum is carried out by volunteers from the Greater Manchester Transport Society.

The museum collection is constantly developing and restoration work can be often be seen by visitors.

See also: List of vehicles at the Museum of Transport, Greater Manchester

The museum is home to around 100 buses, of which 70 or so are kept on the site. The remaining vehicles are kept elsewhere to allow for restoration work to be carried out and so other vehicles can be exhibited.

Also in the collection are two trolleybuses from Manchester and Ashton-under-Lyne corporations, the prototype Manchester Metrolink tram, and a Manchester Corporation tram from 1901. There is also a host of other related exhibits, from old signs to uniforms, and several items used by Warner Bros. during filming of Harry Potter and The Prisoner of Azkaban.

The museum holds a number of regular events throughout the year.

For most of these events, a heritage bus service from Manchester Victoria Station to the museum runs every 20 minutes between 09:50 and 17:00.

The Museum of Transport is approximately two miles north of Manchester city centre, close to the junction of the A665 (Cheetham Hill Road) and A6010 (Queens Road). It is at the north end of Boyle Street, adjoining the First Greater Manchester bus garage. The Queens Road Metrolink station on the Manchester Metrolink is 200m away. Bus services 42, 88, 135 and 151 stop nearby.

The museum is signposted from the Manchester Fort shopping centre

The Museum is open from 10 a.m. to 4.30 p.m. on Wednesdays, Saturdays, Sundays and Public Holidays (except at Christmas and New Year), and every day in August.

All content from Kiddle encyclopedia articles (including the article images and facts) can be freely used under Attribution-ShareAlike license, unless stated otherwise. Cite this article:
Museum of Transport, Greater Manchester Facts for Kids. Kiddle Encyclopedia.