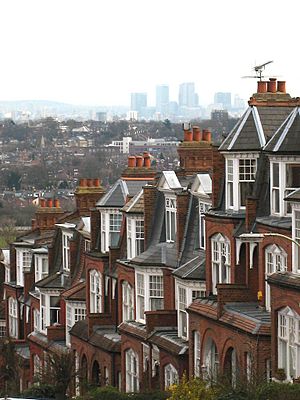 The earliest records of Muswell Hill date from the 12th century. The Bishop of London, who was the Lord of the Manor of Haringey, owned the area and granted 65 acres (263,000 m²), located to the east of Colney Hatch Lane, to a newly formed order of nuns. The nuns built a chapel on the site and called it Our Lady of Muswell.

The name Muswell is believed to come from a natural spring or well (the "Mossy Well"), said to have miraculous properties. A traditional story tells that Scottish king Malcolm IV was cured of disease after drinking the water. The area became a place of pilgrimage for healing during medieval times. The River Moselle, which has its source in Muswell Hill and Highgate, derives its name from this district; it was originally known as the Mosa or Mosella.

In the 18th century Muswell Hill was a scattered village consisting mainly of detached villas with large gardens. In 1787 one commentator wrote that nowhere within 100 miles (160 km) of London was there a village so pleasant or with such varied views. Little had changed by the middle of the 19th century. One of the houses of the time was The Limes. This house occupied the angle of Muswell Hill Road with Colney Hatch Lane and was a three-storeyed house with portico and two-storeyed wing approached by a double carriage drive through impressive gateways. The large grounds of the house extended to Tetherdown and included a lake. Opposite The Limes was Muswell Hill pond and beyond that the Green Man inn, built of stone.

Further down the hill past the Green Man was The Elms, a squat three-storeyed house later improved by Thomas Cubitt standing in 11 acres (45,000 m2), part of the grounds of which were laid out by Joseph Paxton. A short distance down the north side of Muswell Hill was The Grove, which was three storeys high and had nine bays with pedimented projections at each end. It stood in 8 acres (32,000 m2) of grounds which contained a 200-yard avenue of oaks. In 1774 the house was occupied by Topham Beauclerk.

A little farther down the hill stood Grove Lodge, also in wooded grounds. Altogether there were eight properties in Muswell Hill worthy of note in 1817. 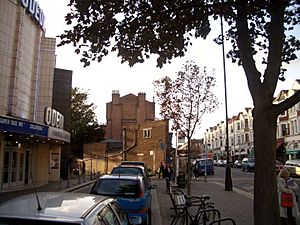 The former Odeon cinema, now an Everyman, in Muswell Hill is a Grade II* Listed Building

Parallel with Muswell Hill was a track known as St James's Lane which ran across a triangle of wasteland. By the middle of the 19th century houses were already dispersed along the lane at the foot of which was Lalla Rookh, a two-storeyed villa with a wide verandah. Other buildings there were apparently cottages or huts, both single and in terraces.

It was not until the end of the 19th century that Muswell Hill began to be developed more densely from a collection of country houses to the London village that it is today. The development was spurred by the opening in 1873 of Alexandra Palace, a massive pleasure pavilion built on the most easterly of north London's gravel hills and intended as the counterpart to the Crystal Palace on Sydenham Hill in south London. Alexandra Palace was served by a branchline railway from Highgate, with an intermediary station at Muswell Hill (see below). The foot of Alexandra Palace was served by another rail network with connecting services to Finsbury Park and Kings Cross stations.

Most development was initiated in the early 20th century when the current street pattern was set out and elegant Edwardian retail parades were constructed. The shopping centre is based on roads that form three sides of a square: Fortis Green Road, Muswell Hill Broadway and the extension of the Broadway into Colney Hatch Lane. At each node point is a church: United Reformed, Church of England, Methodist, and Roman Catholic. One of the nodes, opposite St James's CoE, was also the site of the Athenaeum music hall (later demolished with the site redeveloped as a supermarket), opposite which a surviving art deco Odeon cinema was built in the 1930s. The site of the Ritz, a cinema formerly at the top of Muswell Hill on the next node to the east, has been redeveloped as offices.

Until the mid-20th century there was a rail branch line, the Muswell Hill Railway, from Highgate which passed through Muswell Hill, terminating at a station at Alexandra Palace. It was intended under the Northern Heights plan to integrate this into the London Underground Northern line; some contemporary tube maps (e.g. the 1948 map) showed the line as being under construction. However, this plan was cancelled after the Second World War, and the railway line was abandoned in 1954. The line was later converted to become the Parkland Walk.

In 1964, three young Muswell Hill residents, the brothers Ray and Dave Davies and Pete Quaiffe, formed The Kinks. Categorised in the United States as a British Invasion band, the Kinks are recognised as one of the most important and influential rock groups of the era. The Davies' parents' home at 6 Denmark Terrace, Fortis Green, remains a magnet for rock music tourists.

In March 2013 Muswell Hill was named one of the five most desirable places to live in London in the Sunday Times "Best Places To Live" guide.

Close to Alexandra Park and Highgate Woods, Muswell Hill is a mainly Edwardian north London suburb. Muswell Hill Broadway and Fortis Green Road, the main shopping streets, still maintain their historic character with most of the original facades preserved above street level. The area has a synagogue and six churches, one of which has been converted into a pub. Some parts have fine views over London.

At the top of a hill, Muswell Hill is not directly served by a tube station but several bus routes connect to the West End and the City. They also serve nearby underground stations at Highgate, Bounds Green, East Finchley, Finsbury Park and Turnpike Lane and to train services at Alexandra Palace and Hornsey.

The nearest tube stations are:

All content from Kiddle encyclopedia articles (including the article images and facts) can be freely used under Attribution-ShareAlike license, unless stated otherwise. Cite this article:
Muswell Hill Facts for Kids. Kiddle Encyclopedia.