Chipping Barnet or High Barnet is a market town in the London Borough of Barnet, England. It is a suburban development built around a 12th-century settlement, and is located 10 1⁄2 miles (17 km) north north-west of Charing Cross, east from Borehamwood, west from Enfield and south from Potters Bar. Its name is very often abbreviated to just Barnet, which is also the name of the borough of which it forms a part. Chipping Barnet is also the name of the Parliamentary constituency covering the local area - the word "Chipping" denotes the presence of a market, one that was established here at the end of the 12th century and persists to this day. Chipping Barnet is one of the highest-lying urban settlements in London, with the town centre having an elevation of about 427 feet (130 m).

The town's name derives from an ancient settlement, recorded as Barneto c. 1070, Barnet 1197, La Barnette 1248, that is 'the land cleared by burning', from Old English bærnet, referring to the clearing of this once densely forested area in early times.

This was the site of the Battle of Barnet in 1471 (more accurately, Hadley), where Yorkist troops led by King Edward IV killed the rebellious "Kingmaker" Richard Neville, Earl of Warwick and Warwick's brother, John Neville, 1st Marquess of Montagu. This was one of the most important battles of the Wars of the Roses. Barnet Hill is said to be the hill mentioned in the nursery rhyme "The Grand Old Duke of York".

It is also the site of an ancient and well-known horse fair, whence comes the rhyming slang of Barnet Fair or barnet for 'hair'. The fair dates back to 1588 when Queen Elizabeth I granted a charter to the Lord of the Manor of Barnet to hold a twice yearly fair.

The famous Barnet Market is now over 810 years old. On 23 August 1199 King John issued a charter for a market at Barnet to the Lord of the Manor, the Abbot of St. Albans, John de Cella. 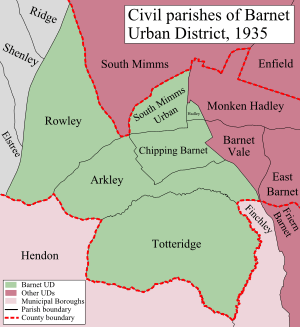 A map of Barnet Urban District in 1935

Chipping Barnet was historically a civil parish of Hertfordshire and formed part of the Barnet Urban District from 1894. The parish was abolished in 1965 and the Chipping Barnet section of its former area was transferred from Hertfordshire to Greater London and the newly created London Borough of Barnet. In 1801 the parish had a population of 1,258 and covered an area of 1,440 acres (5.8 km2). By 1901 the parish was reduced to 380 acres (1.5 km2) and had a population of 2,893. In 1951 the population was 7,062.

In Saxon times the site was part of an extensive wood called Southaw, belonging to the Abbey of St Albans. The name of the town appears in early deeds as 'Bergnet' – the Saxon word 'Bergnet' meant a little hill (monticulus). Barnet's elevated position is also indicated in one of its alternative names ('High Barnet'), which appears in many old books and maps, and which the railway company restored. The area was historically a common resting point on the traditional Great North Road between the City of London and York and Edinburgh.

At the beginning of the 21st century, a tongue-in-cheek movement calling for the name Barnet to be changed to "Barnét" began to gain the attention of the public and the national media, with many public road signs in the area regularly being altered to contain the accented character. Barnet Council has been treating any such alterations to public road signs as vandalism. 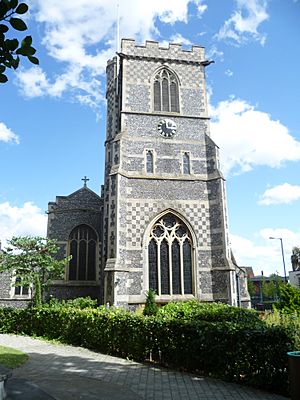 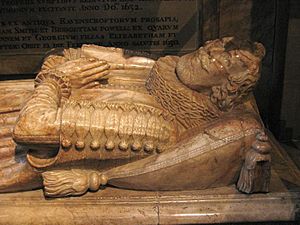 The living of Barnet is a curacy, held with the rectory of East Barnet till the death of the last incumbent in 1866, when the livings were separated. The parish of Chipping Barnet, served by St John's Church, was provided with a chapel-of-ease in Victorian times; subsequently Chipping Barnet parish was split in two, and the chapel-of-ease (on Bells Hill, Barnet) raised to the status of a parish church, dedicated to St Stephen.

In addition to the charity established to maintain his father's tomb, James Ravenscroft (and his wife Mary) established a charity to support six "poor and ancient women".

The tower of Barnet parish church — St John the Baptist — at the top of Barnet Hill claims to be the highest point between itself and the Ural Mountains 2,000 miles (3,200 km) to the east. However, the same has been said of numerous other points. Since the opening of the railway, development has increased considerably, especially in the west of the area near Arkley.

Chipping Barnet is within the High Barnet ward. According to the 2011 census, the population was 82% white (68% White British, 11% Other White, 3% White Irish). Indians made up 4% of the population, and all black groups made up 3%.

Barnet Hill is a major hill on the historic Great North Road. In coaching days, 150 stagecoaches passed through Barnet daily. The modern Great North Road replacement the A1 avoids the town along Barnet Bypass.

Barnet FC is the local football team, currently in Football League Two, the fourth tier of English football – at the end of the 2012/13 season Barnet were relegated from League Two, but have regained promotion since. They played at the Underhill Stadium until 2012/13 but from the 2013/14 season are playing at The Hive Stadium in Stanmore in the London Borough of Harrow. They first reached the Football League in 1991 as champions of the GM Vauxhall Conference but lost their status 10 years later with relegation, only to return four years later – again as Conference champions. London Lions F.C. is also based in Barnet, near Stirling Corner, but the 1st team plays midweek and some cup home games at Hemel Hempstead Town F.C. as its own ground is not floodlit and does not meet the requirements for some cup competitions. There are a number of amateur football clubs based in Barnet including East Barnet Old Grammarians and Ravenscroft Old Boys.

Barnet Cricket Club and Old Elizabethans' Cricket Club have merged to form one club in Barnet and currently play their games at Gypsy Corner. Shaftesbury Barnet Harriers is a local athletics club. Chipping Barnet has a King George's Field in memorial to King George V. Old Court House Recreation Ground is a park in High Barnet.

High Barnet is home to an Everyman cinema, the Barnet Museum, the All Saints Art Centre, the traditional annual Barnet Fair, which was chartered in Medieval times, the Ravenscroft local park and Barnet recreational park, a now disused well that was frequented by, among others, Samuel Pepys, and many restaurants and public houses.

Cuisines on offer include Italian, French, Indian, Chinese and south east Asian. Amongst the most popular restaurants are branches of Pizza Express, Brasserie Gerard Prezzo, and Emchai (south east Asian cuisine). High Barnet also has a number of coffee/snack outlets, both independent ones such as The Coffee Bean and Oasis, as well as branches of Starbucks, Carluccio's and Costa Coffee.

A small nightclub operated for a few years in the 1980s in the premises now occupied by the Misty Moon pub. The public houses and bars in High Barnet include: the Misty Moon, Toby Carvery, the King's Head, the Monken Holt, the Black Horse, Ye Olde Mitre Inn, the Hadley Oak, the Nelson, the Sebright Arms and the White Lion. The large number of inns in Barnet was a matter of note in Charles Dickens's novel Oliver Twist; it was here that Oliver met the Artful Dodger.

All content from Kiddle encyclopedia articles (including the article images and facts) can be freely used under Attribution-ShareAlike license, unless stated otherwise. Cite this article:
Chipping Barnet Facts for Kids. Kiddle Encyclopedia.