Arkley is an area of north London, England, within the London Borough of Barnet. It is located 10.6 miles (17.1 km) north-northwest of Charing Cross.

It consists of a long village strung out between Barnet and Stirling Corner, roughly centred on the "Gate" pub, and composed of the ancient hamlets of Barnet Gate, Rowley Green and Arkley. At 482 feet (147 m) above sea level, Arkley is one of the highest points in London.

The origins of the name Arkley are unclear; it is first recorded as Arkleyslond in 1332. The first element of the name appears to come from the Old English word (e)arc (or ark, meaning a chest, bin or other wooden receptacle), while the second element is from leāh, a woodland clearing or glade. –lond in the earlier name means "cultivated ground". The name Arkley would thus mean "woodland clearing by the ark or by the place where arks are made". 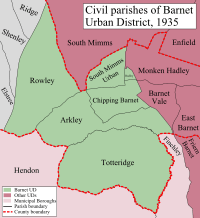 A map showing Arkley parish in 1935

It is thought by some that Hendon Wood Lane was originally a minor Roman road. Certainly the name, 'Grendel's Gate' (now Barnet Gate, and formally known as 'Grims Gate'), is associated with the monster from the Saxon epic, Beowulf. This implies that the place was of modest importance as early as 1005. It may have been a centre of a small but significant community, founded on a woodland economy.

The area is later referred to in medieval documents as 'Southhaw', and may have predated the settlement at Chipping Barnet. Certainly, Barnet manorial court was held here in the 13th century. From at least the early 19th century until the 1890s, Arkley was commonly known as 'Barnet Common' or 'West Barnet'. The establishment of the civil parish [1] of 830 acres (3.4 km²) in 1894 confused matters further, as it was defined by the rural area around 'Barnet Town', and included places as far east as Duck Island and Underhill. It is from the civil parish, and the later ward of Barnet Urban District (from 1905) that we have population statistics for Arkley. Between 1901 and 1971, Arkley's population rose from 483 to 16,832. It was transferred from Hertfordshire to Greater London in 1965.

St Peter's Church, which was designed by George Beckett, was built in 1840 as a private chapel at a cost of £5,000. It contains a wall tablet of its benefactor, Enoch Durant, who died in 1848. The chancel was added in 1898. After Durant's death the advowson was transferred to the rector of Barnet, and an ecclesiastical parish was formed in 1905.

Arkley Windmill was in use by 1806. It is marked as "corn" windmill on the Ordnance Survey of the 1860s . From photographs, it appears to have had only two of its original sails by the 1890s, by which time it may have been powered by steam. It ceased to be a functioning mill during World War I, and was restored in 1930, but not as a working mill. The Gate Inn retains some of its original features. The sign, in the form of a hanging five bar gate, has an inscription which reads: 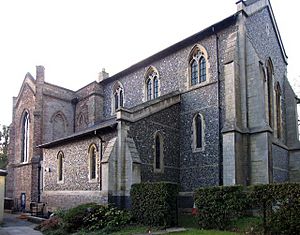 and hinders none;
refresh and pay,
and travel on

According to the old article displayed on one of its walls, the Gate was once visited by Anna Pavlova and her dancing troupe. Until the early 1960s a large tree grew up from the floor of the pub and out through the roof.

For its size, Arkley has more Sites of Importance for Nature Conservations than any other district in Barnet:

In addition, Dollis Brook and Folly Brook, which are also Sites of Importance for Nature Conservation, rise in Arkley.

Arkley Golf Club was founded in 1909. The course was designed by James Braid and Harry Vardon.. On 29 November 1975, a Piper PA-23 Aztec aircraft piloted by retired Formula One racing driver Graham Hill crashed on the golf course, killing all six people on board.

All content from Kiddle encyclopedia articles (including the article images and facts) can be freely used under Attribution-ShareAlike license, unless stated otherwise. Cite this article:
Arkley Facts for Kids. Kiddle Encyclopedia.