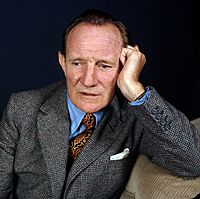 Trevor Wallace Howard-Smith (29 September 1913 – 7 January 1988) was an English actor. He was born in Cliftonville, Kent. He was known for his roles in Brief Encounter (1945), followed by The Third Man (1949). He studied at the Royal Academy of Dramatic Art.

All content from Kiddle encyclopedia articles (including the article images and facts) can be freely used under Attribution-ShareAlike license, unless stated otherwise. Cite this article:
Trevor Howard Facts for Kids. Kiddle Encyclopedia.