Jean Merilyn Simmons, OBE (31 January 1929 – 22 January 2010) was an English actress and singer. One of J. Arthur Rank's "well-spoken young starlets", she appeared predominantly in films, beginning with those made in Great Britain during and after the Second World War, followed mainly by Hollywood films from 1950 onwards. 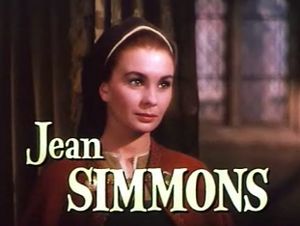 Simmons was born in Islington, London, to Charles Simmons, a bronze medallist in gymnastics at the 1912 Summer Olympics and his wife, Winifred (née Loveland) Simmons. Jean was the youngest of four children. During the Second World War, the Simmons family was evacuated to Winscombe, Somerset.

Her father, a physical education teacher, taught briefly at Sidcot School, and some time during this period, Simmons followed her eldest sister onto the village stage and sang songs such as "Daddy Wouldn't Buy Me a Bow Wow". At this point her ambition was to be an acrobatic dancer. On her return to London Jean enrolled at the Aida Foster School of Dance. Simmons was spotted by the director Val Guest, who cast her in Give Us the Moon.

She began her acting career while still a teenager. As a very promising young actress, she came to Hollywood in 1950 where she became a very popular actress. In the 1970s, she gradually turned to television work, notably in the highly successful miniseries The Thorn Birds (1983), for which she won an Emmy Award for best supporting actress, and North and South (1985).

All content from Kiddle encyclopedia articles (including the article images and facts) can be freely used under Attribution-ShareAlike license, unless stated otherwise. Cite this article:
Jean Simmons Facts for Kids. Kiddle Encyclopedia.