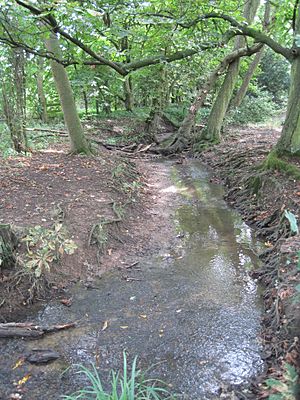 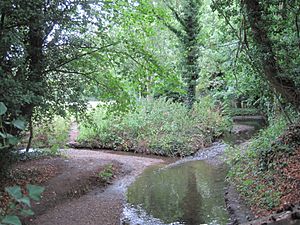 Folly Brook rises near the bottom of Highwood Hill, Mill Hill, and flows east through fields and public open spaces to Woodside Park. From Highwood Hill to Darland's Lake Nature Reserve the brook passes through private land which is not open to public access, apart from a short section next to a footpath through Folly Farm. Darland's Lake was originally ornamental, created by damming the brook, but the lake and surrounding woods are now a nature reserve.

The lower part of the brook from Darland's Lake through Folly Brook Valley to the junction with Dollis Brook is public open space. A footpath alongside the brook starts close to the Darland's noticeboard east of the lake, and goes through woods to grassland between Burtonhole Lane and Pasture and Woodridge Nature Reserve, where it is joined by its tributary, Burtonhole Brook. Folly Brook then goes under Southover to meet Dollis Brook not far from Woodside Park Underground station, connecting it with the Dollis Valley Greenwalk.

Folly Brook and Darland's Lake Nature Reserve are a Site of Borough Importance for Nature Conservation, Grade I.

All content from Kiddle encyclopedia articles (including the article images and facts) can be freely used under Attribution-ShareAlike license, unless stated otherwise. Cite this article:
Folly Brook Facts for Kids. Kiddle Encyclopedia.