Southgate is a suburban area of North London, England in the London Borough of Enfield. It is located around 8 miles (13 km) north of Charing Cross. The name is derived from being the south gate to Enfield Chase.

Within the area is the art deco Grade II* Southgate tube station designed by Charles Holden. The surrounding roads have a variety of shops and restaurants including an ASDA. The area has several large green parks such as Grovelands Park which covers ninety-two acres and contains a former boating lake of seven acres adjoining dense woods and bracken. In Waterfall Road is Christ Church, a building of stone which has a tower and spire and was built in 1862 by Sir Gilbert Scott. In the grounds stands the Minchenden Oak, said to be the largest oak tree in England, and rumoured to be 800 years old. Across the road from the church lies the Walker Cricket Ground; a regular Middlesex venue which was first used in 1859 and is named after the cricketer John Walker.

Southgate tube station on the Piccadilly line is the nearest tube station to most of Southgate's residential area. The other stations are at Oakwood (to the north) or Arnos Grove (to the south west).

Southgate is a cosmopolitan district. There has been a prominent Jewish community since the early 20th century. There are also many Greek, Greek Cypriot, Japanese, and Turkish families living in the district. As of the 2011 census, White British makes up 45% of the population, followed by Other White at 20%. 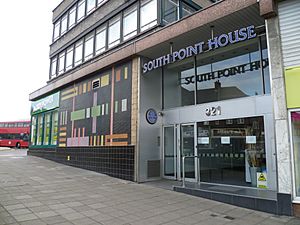 South Point House, where the South Gate once stood.

Southgate was originally the South Gate of Enfield Chase, the King's hunting grounds. This is reflected in the street names Chase Road (which leads due north from the station to Oakwood, and was formerly the avenue into the Chase) and Chase Side. There is a blue plaque on a building on the site of the south gate. A little further to the south was another small medieval settlement called South Street which had grown up around a village green; by 1829 the two settlements had merged and the village green became today's Southgate Green.

Southgate was predominantly developed in the 1930s: largish semi-detached houses were built on the hilly former estates (Walker, Osidge, Monkfrith, etc.) following increased transport development. In 1933, the North Circular Road was completed through Edmonton and Southgate, and also in 1933, the London Underground Piccadilly line was extended from Arnos Grove (where it had reached the previous year), through Southgate tube station, on to Enfield West (now known as Oakwood). This unleashed a building boom, and by 1939 the area had become almost fully developed. 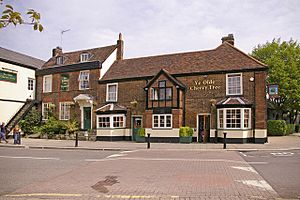 Because of the age of the former village and its position in a ring of villages (the nearby Barnet and Enfield similarly hosting a number of coaching inns) one day's travel by coach from London, Southgate had many pubs: within the village centre there were no fewer than six licensed premises.

Many were located on Chase Side, but in recent times have been mostly replaced by restaurants. The Waggon and Horses closed in 2013, becoming an Anatolian restaurant. The Rising Sun in Chase Side was the terminus for a local horsebus service to Colney Hatch (and there to Kings Cross) before the arrival of the railways, whereupon the service switched to the new station in Palmers Green. It was rebuilt in 1932, and substantially renovated in 2008, changing its name to The Sun. The White Hart is a long-standing pub on Chase Road, near Southgate Circus roundabout.

Opposite the Southgate Club on Chase Side stood The Gate, which was closed in August 1909. The landlord, A. Butcher, took the sign with him to the Fishmonger's Arms in Winchmore Hill Road - which apparently read "This gate hangs well, and hinders none. Refresh and pay - then travel on." While the sign no longer exists, his pub does - rebuilt in the 1930s, the pub owes its name to the nearby ice wells which produced ice for central London fish markets.

In the middle of the 18th century, The Crown (also once known as The Crown Hotel) on Chase Side was a centre of 'much sport'. A caption in a framed picture of a dog discovered by author Herbert W. Newby reads:

Mr. Earl of the 'Crown Inn', Southgate, Nr London, will produce a retriever puppy not over six months old for £10 or £20 that will perform more tricks than any other dog of nine months old in England. He is a beautiful dog, and very large for his age.

The building was originally a wooden two-storey building with a brick gable-end facing the highway. It was rebuilt in 1895 but has since been demolished. The Wetherspoons pub The New Crown occupies a site nearly opposite.

Other notable pubs include Ye Olde Cherry Tree which overlooks Southgate Green to the south of Southgate's main centre, and The Woodman which is on The Bourne.

There are five synagogues with Southgate in their name,: Cockfosters and North Southgate, Palmers Green and Southgate Synagogue. These two are part of the United Synagogue, also included, but independent, is the Southgate Ilan 'Bel-Air' Kahlani Synagogue, serving Yemenite Jews of Adeni extraction and other Mizrahi Jews. Chabad Southgate also is included.

Christ Church stands near Southgate Green. This was built on the site of Weld Chapel, which was demolished in 1861. The clock on the church was placed there to celebrate Queen Victoria's diamond jubilee. The church contains London's largest collection of pre-raphaelite stained glass by Morris, Marshall Faulkner & Co (later Morris & Co) and has a fine choir. The Parish Church of St Andrew is on Chase Side. Emmanuel Evangelical Church meets in Ashmole School. Southgate Methodist Church is on The Bourne, near Southgate Underground station. It was built in 1929, replacing a building on Chase Side. It is an active community hub. 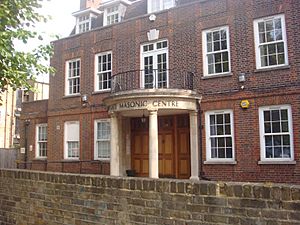 The Southgate Masonic Centre is home to 160 Lodges of which 15 are from Middlesex, along with 5 Chapters. The Centre, a converted church hall, was opened in 1968. The Middlesex Lodges that joined had been meeting in pubs and similar venues and welcomed the opportunity to have their own Centre.

Main page: List of schools in the London Borough of Enfield 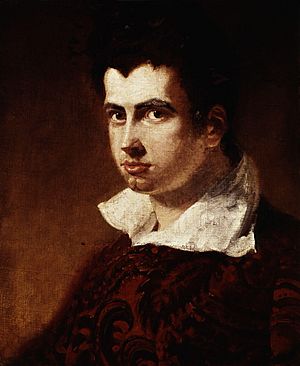 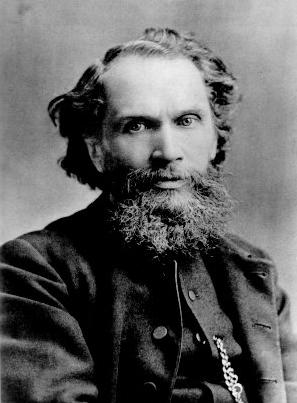 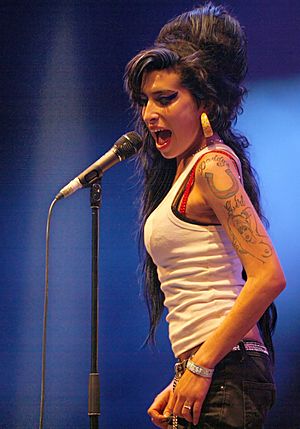 All content from Kiddle encyclopedia articles (including the article images and facts) can be freely used under Attribution-ShareAlike license, unless stated otherwise. Cite this article:
Southgate, London Facts for Kids. Kiddle Encyclopedia.