Wood Green is a district of north London, England, in the London Borough of Haringey. It is 6.7 miles (10.8 km) north of Charing Cross, and is west of Tottenham, south of Palmers Green and north of Harringay. The population, comprising the Noel Park and Woodside wards, was 28,453 in the 2011 Census. The London Plan identifies the area as one of the metropolitan centres in Greater London.

In the latter half of the 19th century and before urbanisation, Wood Green was part of Tottenham and covered by woodland called Tottenham Wood: hence the original name of the area, Tottenham Wood Green. The 18 acre area was auctioned off as 'Wood-Green' in 9 separate plots on 13 August 1806 by local agent Prickett and Ellis at Garraway's Coffee house in Cornhill,London. 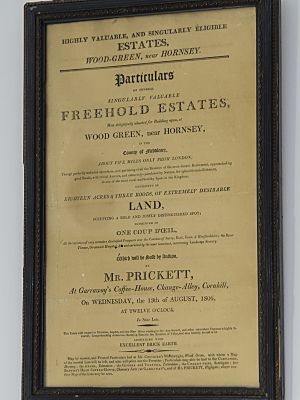 Sales Particulars used by Prickett and Ellis in 1806 in the sale of 'wood green'.

Two bombs planted by the Provisional IRA exploded at the Shopping City complex on 10 December 1992, injuring 11 people, including four police officers. The bombs were hidden in two separate litter bins about 200 yards away from each other.

There are no Streets in Wood Green (only Roads, Avenues, Closes etc.).

Wood Green is mostly represented by the Noel Park ward (southern) and Woodside ward (northern). In the 2011 census, the largest ethnic group of Noel Park was Other White, 27%, followed by 25% White British, making the total white groups (with Irish) 55%. The Woodside ward was likewise, the figures being 30% and 23% respectively, whereas 8% were Black African. 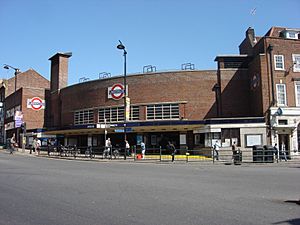 Alexandra Palace, formerly known as "Wood Green for Alexandra Park", is on the East Coast Main Line. It has services in to Kings Cross and Moorgate and out to Hertford and Welwyn Garden City. Bowes Park serves the Hertford Loop Line branch of the East Coast Main Line. Until the 1960s, a branch line of the former Great Eastern Railway network crossed the Wood Green High Road at a station called Noel Park; providing connections to Stratford and North Woolwich.

A bus station is located at Turnpike Lane, there are also many buses that stop outside Wood Green tube station. It is the starting place of many bus routes including the 29 to Trafalgar Square.

All content from Kiddle encyclopedia articles (including the article images and facts) can be freely used under Attribution-ShareAlike license, unless stated otherwise. Cite this article:
Wood Green Facts for Kids. Kiddle Encyclopedia.