Kids Encyclopedia Facts
Not to be confused with Hornsea.

Hornsey is a district of north London, England in the London Borough of Haringey. Hornsey has been a much larger ancient parish than the electoral ward of the same name, in turn a smaller entity than the Municipal Borough of Hornsey which co-governed its area with Middlesex County Council from 1889 to 1965, since which time, the name usually refers only to the London neighbourhood at the heart of these former areas to the west of Hornsey railway station. It is an inner-suburban, for the most part residential, area centred 6.2 miles (10 km) north of Charing Cross. Despite being the oldest recorded village in London, there is much debate about the definition of the area and the term Hornsey Village.

The boundaries of Hornsey neighbourhood today are not clearly defined. Since the Municipal Borough of Hornsey was abolished in 1965, the name most commonly may refer either to the N8 postal district which includes Crouch End and part of Harringay, or to a smaller area centred on Hornsey High Street, called Hornsey Village, at the eastern end of which is the churchyard and tower of the former parish church which used to be the administrative centre of the wider parish of Hornsey. This used to stretch to a long border with Islington and Stoke Newington. It also had two small detached parts immediately beyond and within the latter. In the 1840s the parish had 5,937 residents and had been reduced by the loss of Finsbury Park but comprised 2,362 acres (9.56 km2) taking in besides its own village, the established hamlets of Muswell Hill, Crouch End, and part of Highgate.

North of Hornsey High Street, and immediately to its south, some of the area is public sector housing, surrounded by the late Victorian terraces developed by builders such as John Farrer. Between the western end of the High Street and the bottom of Muswell Hill, the character of the area changes dramatically. Much of this part is the Warner Estate built up with large well-appointed late Victorian houses. To the south west of the High Street is Priory Park, a pleasant urban green space.

The High Street has a range of shops and an increasing number of restaurants and pubs. The eastern section retains strong echoes of its rural past and hosts the 13th-century tower which is all that remains of St Mary's Church. The Tower has recently been used as The Intimate Space, climaing to be London's smallest performance space.

On the north side of the High street was the old public bath and wash house (not to be confused with Hornsey Baths which is 1.5 miles away on the Hornsey Road) which was demolished got make way for a new housing scheme and Sainbury's. Opened in 1932, it had 33,000 users a year in the 1950s. A small group of local residents had suggested to Haringey Council that it should be developed as an arts & crafts studio and gallery for local artists.

The TV drama series The Hour was filmed in Hornsey Town Hall (actually in central Crouch End). Hornsey's Town Hall was also used within the show.

One electoral ward containing the word "Hornsey" was in use by the London Borough of Haringey in 2011. In 2001 three wards reflected their area's historic identity as part and parcel of Hornsey: 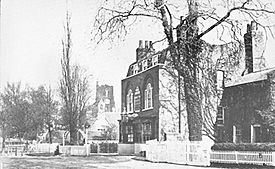 Hornsey High Street in 1873, with the old Three Compases pub building in the centre

The name Hornsey has its origin in the Saxon period and is derived from the name of a Saxon chieftain called Haering. Haering's Hege meant Haering's enclosure. The earliest written form of the name was recorded as Harenhg’ in about 1195. Its development thereafter gave rise to the modern-day names of Harringay (the district of London), the London Borough of Haringey and Hornsey. The church first mentioned in 1291. to form an urban area in the middle of the parish.

Much of Hornsey was built up in Edwardian times, but the tower of the original parish church still stands in its ancient graveyard in Hornsey High Street, at the centre of the old village. Other notable places are the Doragh Gasworks, the former Hornsey Town Hall in Crouch End, and Highpoint and Cromwell House in Highgate. 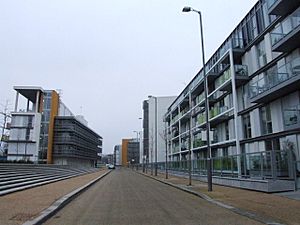 In 1954 the first Lotus Cars factory was established in stables behind the Railway Hotel (now Funky Brownz Bar) on Tottenham Lane. The company was formed as Lotus Engineering Ltd in 1952 by Colin Chapman and Colin Dare, both engineering graduates of University College, London. The Railway Hotel pub was owned by Chapman’s father. In its early days Lotus sold cars aimed at privateer racers and trialists. Its early road cars could be bought as kits, in order to save on purchase tax. Adjacent to the pub was the first Lotus showroom (now part of Jewson's building materials store) where there is now a memorial plaque to Colin Chapman erected by Club Lotus. Recently an application to demolish the building, listed by Haringey Council as an historic building of interest, was turned down following a public campaign by local resident Chris Arnold, son of the former Lotus Sales Director Graham Arnold. It is now a plumbing shop. The production moved to Cheshunt in 1959, and to Hethel in Norfolk in 1966.

Established in 1964, Hornsey Co-operative Credit Union was Britain's oldest credit union, until it merged with London Capital Credit Union in 2013.

Since 2000 Hornsey's residential developments have been architecturally diverse and overall accommodative of a diverse range of the local community. This has included estates of more than 50 homes with a proportion available under social housing and affordable housing schemes.

Hornsey in literature, on film and television

In Jonathan Coe's 1987 debut novel The Accidental Woman, the protagonist Maria shares a flat in Hornsey with two other women for several years.

All content from Kiddle encyclopedia articles (including the article images and facts) can be freely used under Attribution-ShareAlike license, unless stated otherwise. Cite this article:
Hornsey Facts for Kids. Kiddle Encyclopedia.