Golders Green is an area in the London Borough of Barnet in England. Although the settlement history goes back to the 18th century, Golders Green is essentially a late 19th-century suburban development. It is situated approximately 5.5 miles (8.5 km) north west of Charing Cross and centred on the intersection of Golders Green Road and Finchley Road.

It was historically part of Middlesex, and formed part of the Municipal Borough of Hendon until 1965. In the early 20th century it grew rapidly in response to the opening of a tube station of the London Underground, adjacent to the Golders Green Hippodrome which was home to the BBC Concert Orchestra for many years. The area has a wide variety of housing and a busy main shopping street, Golders Green Road.

It is known for its large Jewish population as well as for being home to the largest Jewish kosher hub in the United Kingdom, which attracts many Jewish tourists.

The name Golders comes from a family named Godyere who lived in the area, and Green alludes to the manorial waste on which the settlement was built. Golders Green has been a place in the parish and manor of Hendon since around the 13th century. The earliest references to the name of the adjacent district of "Temple Fortune" is on a map (c. 1754). However this name reveals a much earlier history. It is likely that the name refers to the Knights of St John, who had land here (c. 1240). Fortune may be derived from a small settlement (tun) on the route from Hampstead to Hendon. Here a lane from Finchley, called Ducksetters Lane (c. 1475), intersected. It is likely that the settlement was originally the Bleccanham estate (c. 10th century). By the end of the 18th century Temple Fortune Farm was established on the northern side of Farm Close.

The building of Finchley Road (c. 1827) replaced Ducksetters Lane as a route to Finchley, and resulted in the development of a small hamlet. Hendon Park Row (c. 1860s) is of this period, and consisted of around thirty small dwellings built by a George Stevens, which were, with two exceptions, demolished around 1956. A small dame school and prayer house run by Anglican deaconesses existed in the 1890s and 1900s, and developed to become St. Barnabas (1915). Along Finchley Road were a number of villas (c. 1830s), joined by the Royal Oak public house (c. 1850s). By the end of the 19th century there were around 300 people living in the area, which included a laundry and a small hospital for children with skin diseases. The principal industry was brick making. 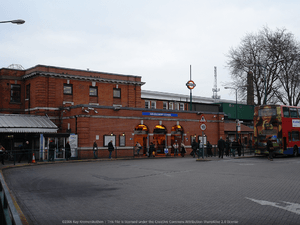 In 1895 a Jewish cemetery was established adjacent to Hoop Lane, with the first burial in 1897. Golders Green Crematorium was opened in 1902 (although much of it was built after 1905). A significant moment in Temple Fortune's development into a suburban area occurred in 1907, when transport links were vastly improved by the opening of Golders Green tube station.

Although the area had been served by horse-drawn omnibuses (since at least the 1880s) and later motor buses (from 1907), the tram line of 1910, connecting Finchley Church End with Golders Green Station, led to the development of the area west of Finchley Road. The establishment of Hampstead Garden Suburb brought major changes to the area east of Finchley Road. Temple Fortune Farm was demolished and along the front of the road the building of the Arcade and Gateway House (c. 1911) established the Hampstead Garden Suburb's retail district.

Both the Golders Green Hippodrome, former home of the BBC Concert Orchestra, and the police station opened in 1913. The now-demolished Orpheum Theatre (1930) was intended to rival the Hippodrome in Golders Green.

The area is adjacent to the Heath Extensions part of Hampstead Heath.

Despite Golders Green often being referred to as a Jewish area, the Christian, Muslim and no-stated-religion populations represent the majority of Golders Green residents with significant populations of Polish and Indian origin.

Ethnically, the Golders Green ward was 64% white (43% British, 21% Other, 1% Irish). Indians, Other Asians and Black Africans made up 5% each. 6% claimed 'Any other ethnic group', which is unusually high.

There has been a prominent Jewish community since the 20th century. The Jewish community took root after Hitler's rise to power, with the first German Jewish immigrants forming the Golders Green Beth Hamedrash. Soon after, Galician Jewish immigrants formed other synagogues. With it came the formation of Jewish schools such as Menorah before the onset of World War II. By the 1950s, the Jewish population tripled. The Jewish community of Hendon and Golders Green is viewed as one, sharing the schooling system as well as rabbinical guidance. Jews made up 37% of the population according to the 2011 census, whereas Christians made up 26%.

In the early 1970s, Africans from Nigeria and a number of Ugandan Asians expelled by the regime of Idi Amin settled in Golders Green.

The annual BEFFTA Awards are often held at the El Shaddai International Christian Centre, with celebrities such as Trevor McDonald presenting awards.

Golders Green station is a London Underground tube station on the Northern line in zone 3. It is the first surface station on the Edgware branch when heading north. On the station's forecourt is Golders Green bus station. This is a major hub for London Buses in North West London. National Express coaches also stop at the bus station before/after central London.

Many bus routes pass through Golders Green, including the 210 to Finsbury Park, the 82 to Victoria and the 102 Edmonton Green, and from Golders Green station the 240 to Edgware, the 183 to Pinner and the 83 to Ealing Hospital begin their routes. 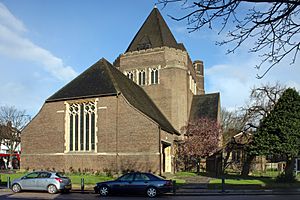 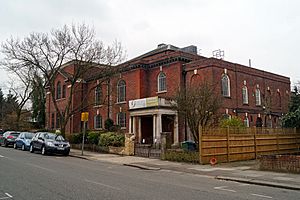 The Carmelite Monastery was established in Bridge Lane in 1908 and sold in 2007. The Anglican parish church of St. Alban the Martyr in North End Road was designed by Sir Giles Gilbert Scott, and in 1933 replaced the original eponymous church on the site, which is now the parish hall. The latter was built in 1910 and made a parish church in 1922. St. Edward the Confessor, a Roman Catholic church, was built in 1915 and consecrated in 1931. There is also a Greek Orthodox cathedral on Golders Green Road, and a Coptic Orthodox church, both having been Anglican churches for most of the 20th century.

There are several synagogues in the area. The first in the area, Golders Green Synagogue, started in 1915 and its current building in Dunstan Road opened in 1922. The Golders Green Beth Hamedrash opened in Golders Green in 1935, moving to the Riding in 1956. The Sassover Beis Hamedrash Helenslea Avenue moved to Golders Green from the east end in 1938 as well as the Beis Yissochor Dov currently in Highfield Avenue, the most sought after and busiest. The Machzike Hadath Synagogue moved to Golders Green in the 1970s, opening its present building in 1983. In about 1960 the Eastern Jewish Community established the Ohel David Eastern Synagogue at the Lincoln Institute, the former site of the Golders Green Beth Hamedrash. The Synagogue Beth Shmuel opened in 1942 in Oakfields Road and relocated at 169-171 Golders Green Road since 1952 and is one of the most prominent synagogues in North West London with Grand Rabbi Elchonon Halpern the longest serving Rabbi since its inauguration in 1942.

The one-time Hindu temple atop Helenslea Avenue, decommissioned in 2013, was previously St Ninian's Presbyterian Church, built in 1911 by T. Phillips Figgis who was also noted for designing some stations on the Northern line. The congregation merged with Golders Green Methodist Church (now Trinity Church, Hodford Road) in 1979. There is a Unitarian chapel built in the Romanesque style on Hoop Lane which contains some murals from the 1920s. The former Hippodrome theatre is now an El Shaddai International Christian Centre. 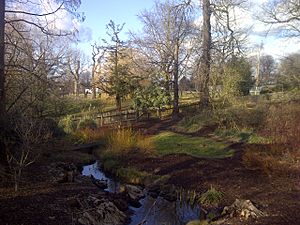 Golders Hill Park, adjoining the West Heath of Hampstead Heath, is a formal park, which includes a small zoo, a walled horticultural garden, pinetum, duckponds, a water garden and a café. During the summer, children's activities are organised and there is often live music on the bandstand. Close to the park, also adjoining the West Heath is the Hill, a formal garden with an extensive and imposing pergola.

The area is the setting of the humorous short story "The Ghoul of Golders Green" (May Fair, 1925) by Michael Arlen.

A 1960s recording "Finchley Central" by the New Vaudeville Band refers to a possible Northern line tube journey: "For Golders Green change at Camden Town", though in reality bus would be far quicker between these two points.

George Harrison recorded an unreleased track called "Going Down to Golders Green". This came about because he would visit members of the pop group Badfinger, who lived at 7 Park Avenue, off North End Road, situated on the borders of Golders Hill Park.

In 2009 a mansion in West Heath Avenue was used by TV show The X Factor for the contestants and received significant press coverage.

Dannie Abse, the Welsh-Jewish poet, was once a resident of Golders Green. It provides a backdrop to a couple of his poems such as "Odd" and "3 a.m. in Golders Green Road".

All content from Kiddle encyclopedia articles (including the article images and facts) can be freely used under Attribution-ShareAlike license, unless stated otherwise. Cite this article:
Golders Green Facts for Kids. Kiddle Encyclopedia.