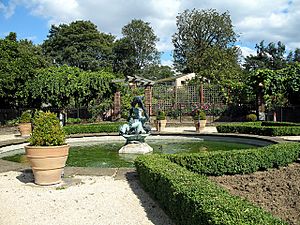 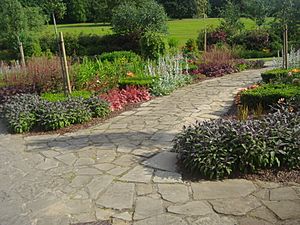 It adjoins the West Heath part of Hampstead Heath, and was formerly surmounted by a large house which was bombed during World War II. It is chiefly grassy parkland, but it also has a formal, beautifully tended, flower garden next to a duck pond with a small humpback bridge, a separate water garden, which leads onto a larger pond, and a small free zoo, recently renovated, mostly in one bloc but with a separate pen primarily for fallow deer. A butterfly house is open at certain times in summer. There are also tennis courts, a playground and croquet lawns. A restaurant stands at the top of the park, near the site of the original house.

During the summer, children's activities are organised and through June and July there is live music on the bandstand on Sunday afternoons. Unlike most of Hampstead Heath, dogs must be kept on a lead in the park.

All content from Kiddle encyclopedia articles (including the article images and facts) can be freely used under Attribution-ShareAlike license, unless stated otherwise. Cite this article:
Golders Hill Park Facts for Kids. Kiddle Encyclopedia.