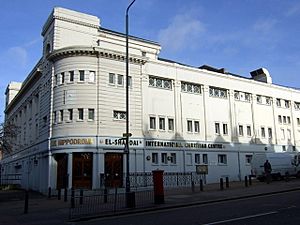 The Golders Green Hippodrome in 2008, when it was used as a Christian church.

The Golders Green Hippodrome was built in 1913 by Bertie Crewe as a 3,000-seat music hall, to serve North London and the new London Underground Northern line expansion into Golders Green in the London Borough of Barnet, London, England.

Taken over by the BBC in the 1960s as a television studio, it has been put to more recent use as a radio studio and multi-purpose concert venue. In 2007, it became an evangelical church building. Since 2017, it has been an Islamic centre.

The Grade II listed Hippodrome Theatre building next to Golders Green Underground station was built as a 3,000-seat music hall by Bertie Crewe, and opened on Boxing Day 1913.

Its capacity was reduced by half with the construction of a full theatre stage, and it began to be used for pre- and post-London tours, and has been used as a receiving venue for West End transfers - Laurence Olivier, Marlene Dietrich, Stephane Grappelli, Arthur Askey, Charlie Chester, Django Reinhardt and Chico Marx played there. Donald Swann's Wild Thyme played in 1955, and its regular performances included an annual pantomime and Ralph Reader's Gang Show.

In 1969, the BBC were looking for additional television studio capacity to cope with the introduction of colour transmissions. They took out a long leasehold on the Hippodrome to 2060 In 1969, the Hippodrome was converted into a radio studio and concert hall with reduced capacity of 700 seats, as the BBC had been looking for a north London venue, and became home for the BBC Concert Orchestra, and also saw broadcasts and concerts from the BBC Big Band and BBC Radio Orchestra.

As a concert venue, it was used in various configurations for:

The BBC also broadcast the weekly radio programme Friday Night is Music Night, a traditional old light entertainment programme it had moved from the Camden Palace Theatre. Presented originally by Robin Boyle and conducted by Sydney Torch, it was presented latterly by Ken Bruce.

However, with a public brief to bring music to all of the people of the UK, and with additional high-quality space available all over London, the BBC announced its intention to leave the building in August 2003, after mounting minor repair work, saw the BBC Concert Orchestra relocate to the Mermaid Theatre in central London, among other places.

In 2003, the BBC left the Grade II listed building vacant and deteriorating, although it was bought by El Shaddai International Christian Centre, an evangelical church.

After the BBC left the theatre in August 2003, it was left unused and deteriorated considerably, to the extent that, in early 2005, the venue was placed on English Heritage’s ‘buildings at risk’ register as its future had become so uncertain. Barnet Council was keen for the building to carry on being used as an entertainment venue, and the BBC was given 18 months to sell it as such. However, since no buyer was forthcoming, the local authority allowed it to be sold at auction in September 2006 with the potential for being developed for other uses - for which the BBC had already applied but been turned down.

For planning purposes the Hippodrome came to be classed as 'D2' under the 'Use Classes Order' and not under sui generis, exclusively as a theatre, as no stage productions had taken place for more than 40 years. The 'D2' class meant that potential buyers could use the theatre for: "Cinemas, Dance and Concert Halls, Sports Halls, Swimming Baths, other Indoor Sports and Leisure Uses."

The theatre's potential fate galvanised a group formed of various interest groups and local newspapers, including Save London’s Theatres Campaign, the Theatres Trust, the Hendon Times and the Hampstead & Highgate Express. In early 2007, the Christian group El Shaddai International Christian Centre purchased the Hippodrome for £5million, despite local concerns over the group's beliefs and its intentions for the building.

In 2017, El Shaddai International Christian Centre sold the building and it was bought by the Markaz al-Tathgeef al-Islami (The Centre for Islamic Enlightening), a Shia Islamic centre.

There was a backlash from some members of the local community of Golders Green towards the centre, claiming that the venue should not be granted a 'place of worship' license.

All content from Kiddle encyclopedia articles (including the article images and facts) can be freely used under Attribution-ShareAlike license, unless stated otherwise. Cite this article:
Golders Green Hippodrome Facts for Kids. Kiddle Encyclopedia.