Angel is an area on the northern fringes of central London within the London Borough of Islington. It is 2 miles (3.2 km) north-northeast of Charing Cross on the Inner Ring Road at a busy transport intersection. The area is identified in the London Plan as one of 35 major centres in London. It is a significant commercial and retail centre, and a business improvement district. It is named after the former Angel Inn which stood on the corner of Islington High Street and Pentonville Road.

The area is named after the Angel Inn, which existed from the 17th century.

The boundary of the ancient parishes of Clerkenwell and Islington cut through the area. The southern part of Liverpool Road and the western side of Islington High Street, including the Angel Inn were in the parish of Clerkenwell. Despite this, both parts were considered to form part of the town of Islington. There is a traditional story that a pauper died in Islington and had to be taken to Clerkenwell for burial, which caused the land to be forfeited. The parishes were located outside the City of London. As they became populated suburbs of the city this was reflected in the addition of Clerkenwell in 1604 and Islington in 1636 to the bills of mortality weekly statistical returns. The parishes were governed by vestries and were subject to the Middlesex Quarter Sessions. In 1855 the area became part of the district of the Metropolitan Board of Works and the parish vestries were incorporated as local authorities. In 1889 the parishes were transferred from the County of Middlesex to the County of London. Clerkenwell became part of the Metropolitan Borough of Finsbury and Islington became the Metropolitan Borough of Islington in 1900. The two boroughs were combined in 1965 as the London Borough of Islington in Greater London.

Angel is located 2 miles (3.2 km) north-northeast of Charing Cross on the Inner Ring Road at the northern edge of Central London. The area defined by Islington London Borough Council as the Angel town centre stretches from Islington Green in the north and includes the southern parts of Liverpool Road and Upper Street. In the west it extends to include Chapel Market. South of the Angel intersection it includes the northern part of St John Street. Chapel Market forms a conservation area and the lower portion of Upper Street forms the Angel conservation area. North of Angel is Islington, west is Pentonville, south is Clerkenwell and east is St Luke's.

Towards the south of the area is the busy Angel intersection, a road junction between the Inner Ring Road consisting of Pentonville Road to the west and City Road to the east, Islington High Street to the north, Goswell Road to the southeast and St John Street to the south. On the corner of City Road and Islington High Street is Angel tube station on the Northern line of the London Underground. The Islington Tunnel of the Regent's Canal runs underneath the area from east to west. 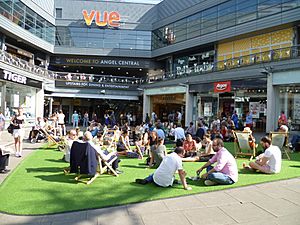 Angel is identified in the London Plan as one of 35 major centres in Greater London. It is a business improvement district, categorised as 'high street and town centre', known as angel.london. The main economic activity of the area is retail. Secondary to this are the evening economy, leisure and education - Angel Central is a shopping centre with a mixture of shops, leisure and entertainment facilities including a Vue cinema and the O2 Academy Islington nightclub. It was opened in 2002 as the N1 Centre, and renamed Angel Central in March 2015. The City and Islington College is another large example of these categories.

All content from Kiddle encyclopedia articles (including the article images and facts) can be freely used under Attribution-ShareAlike license, unless stated otherwise. Cite this article:
Angel, London Facts for Kids. Kiddle Encyclopedia.