Holloway is an inner-city district of the London Borough of Islington, 3.3 miles (5.3 km) north of Charing Cross, which follows the line of the Holloway Road (A1). At the centre of Holloway is the Nag's Head commercial area which sits between the more residential Upper Holloway and Lower Holloway neighbourhoods. Holloway has a multicultural population. It is the home of Arsenal F.C., and was once home to the largest women's prison in Europe, Holloway Prison, until 2016. Holloway is in the historic county of Middlesex.

The origins of the name are disputed; some believe that it derives from Hollow, or Hollow way, due to a dip in the road caused by the passage of animals and water erosion, as this was the main cattle driving route from the North into Smithfield. In Lower Holloway, the former Back Road, now Liverpool Road was used to rest and graze the cattle before entering London. Others believe the name derives from Hallow and refers to the road's historic significance as part of the pilgrimage route to Walsingham. No documentary evidence can be found to support either derivation; and by 1307, the name Holwey was applied to the district around the road. The main stretch of Holloway Road runs through the site of the former villages of Tollington and Stroud. The exact time of their founding is not known, but the earliest record of them dates from the Domesday Book. The names ceased to be used by the late 17th century, but are still preserved in the local place names Tollington Park and Stroud Green.

The original route, from London, led through Tollington Lane, but such was the state of this road by the 14th century, that the Bishop of London built a new road up Highgate Hill, and was claiming tolls by 1318. This was the origins of the Great North Road, now the A1, which passes through Holloway.

Until the 18th century the area was predominantly rural, but as London expanded in the second half of the 19th century it became extremely built-up. Holloway, like much of inner north London, experienced rapid growth around the very early 1900s and quickly became an important local shopping centre. This was aided by the importance of the road junction at Nag's Head which became an important hub for trolleybus services up to their withdrawal in the 1950s. The London and North Eastern Railway opened a station here, which had a significant impact on the residential and commercial development of the neighbourhood in the latter part of the 19th century. The station, now closed, was at the same spot as the current Holloway Road tube station, on the Piccadilly line.

In the late 1930s, the Odeon cinema on the junction of Tufnell Park Road and Holloway Road was built as a Gaumont but was severely damaged by a doodlebug during the Second World War. It has recently undergone extensive refurbishment but retains its impressive foyer and staircase. It is Grade II listed.

During the Second World War, parts of Holloway experienced intense bombing due to its proximity to King's Cross railway station.

Holloway is also home to HMP Holloway in Parkhurst Road, which was first built in 1852, originally housing both male and female prisoners, but since 1902 it has housed only women and is the UK's major female prison. Prisoners that have been held at the original prison include Ruth Ellis, Isabella Glyn, Christabel Pankhurst and Oscar Wilde. 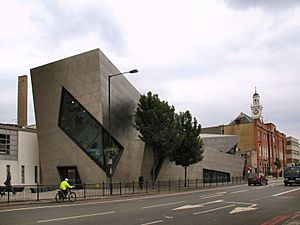 Like many other parts of Islington, the gentrification of Holloway is now under way, particularly in the Hillmarton and Mercers Road/Tavistock Terrace conservation areas (to the south and west of Holloway Road). There are also many luxury development projects taking place over a large area between the Arsenal stadium development and Caledonian Road. In addition, Islington London Borough Council have earmarked many improvement projects for the Nag's Head area over the next decade. It is also home to the large, sprawling Andover housing estate.

Near to Holloway Road tube station is the North Campus of London Metropolitan University. This includes the Tower building, Stapleton House and the Learning Centre. Another prominent feature in Holloway is the Emirates Stadium, home of Arsenal F.C.

The area is home to many artists and people who work in the media, including many journalists, writers and professionals working in film and television. It is also known as a hotspot for many of London's graffiti artists. 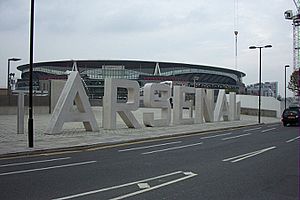 Arsenal Football Club have moved, after 93 years at Highbury, to a new stadium at Ashburton Grove in Holloway. It was informally known as Ashburton Grove until a naming rights deal with Emirates was announced, and that name is still used by some people. The stadium opened in the summer of 2006, and has an all-seated capacity of 60,355, making it the second biggest stadium in the Premiership after Old Trafford and the third biggest in London after Wembley Stadium and Twickenham Stadium. The overall cost of the project was 390 million.

Ashburton Grove was the site of Islington's Waste Transfer station. This facility has been moved to nearby Hornsey Street. All of Islington's waste is shipped here for onward processing - together with a significant proportion of that generated by the neighbouring London Boroughs of Camden and Hackney. The waste is transported by road to the Edmonton Solid Waste Incineration Plant or to landfill sites in Cambridgeshire and Bedfordshire.

Drayton Park railway station is near the southern end of Holloway Road, and is on the Northern City Line. Highbury and Islington is the principal interchange between underground and overground service.

All content from Kiddle encyclopedia articles (including the article images and facts) can be freely used under Attribution-ShareAlike license, unless stated otherwise. Cite this article:
Holloway, London Facts for Kids. Kiddle Encyclopedia.