Kings Cross is a district in Central London, England, 1.5 miles (2.5 km) north of Charing Cross. It is served by London King's Cross railway station, the terminus of one of the major rail routes between London and the North.

The area has been regenerated since the mid-1990s with the terminus of the Eurostar rail service at St Pancras International opening in 2007 and the rebuilding of King's Cross station, a major redevelopment in the north of the area.

The area was previously a village known as Battle Bridge or Battlebridge which was an ancient crossing of the River Fleet. The original name of the bridge was Broad Ford Bridge. The corruption "Battle Bridge" led to a tradition that this was the site of a major battle in AD 60 or 61 between the Romans and the Iceni tribe led by Boudica (also known as Boudicea). The tradition claims support from the writing of Publius Cornelius Tacitus, an ancient Roman historian, who described the place of action between the Romans and Boadicea (Annals 14.31), but without specifying where it was; Thornbury addresses the pros and cons of the identification. Lewis Spence's 1937 book Boadicea – warrior queen of the Britons includes a map showing the supposed positions of the opposing armies. The suggestion that Boudica is buried beneath platform 9 or 10 at London King's Cross Station seems to have arisen as urban folklore since the end of World War II. The area had been settled in Roman times, and a camp here, known as The Brill was erroneously attributed to Julius Caesar, who never visited Londinium. The name is commemorated in two streets lying behind King's Cross and St Pancras stations. St Pancras Old Church, also set behind the stations, is said to be one of the oldest Christian sites in Britain.

The current name has its origin in a monument to King George IV which stood in the area from 1830 to 1845. It was built at the crossroads of Gray's Inn Road, Pentonville Road and New Road, which later became Euston Road. It was sixty feet high and topped by an eleven-foot-high statue of the king, and was described by Walter Thornbury as "a ridiculous octagonal structure crowned by an absurd statue". The statue itself, which cost no more than £25, was constructed of bricks and mortar, and finished in a manner that gave it the appearance of stone "at least to the eyes of common spectators". The architect was Stephen Geary, who exhibited a model of "the Kings Cross" at the Royal Academy in 1830. The upper storey was used as a camera obscura while the base in turn housed a police station and a public house. The unpopular building was demolished in 1845, though the area has kept the name of Kings Cross. A structure in the form of a lighthouse was built on top of a building almost on the site about 30 years later. Known locally as the "Lighthouse Building", the structure was popularly thought to be an advertisement for Netten's Oyster Bar on the ground floor, but this seems not to be true. It is a grade II listed building.

London King's Cross railway station now stands by the junction where the monument stood and took its name. The station, designed by architect Lewis Cubitt and opened in 1852, succeeded a short-lived earlier station, erected north of the canal in time for the Great Exhibition.

St Pancras railway station, built by the Midland Railway, lies immediately to the west. They both had extensive land ("the railway lands") to house their associated facilities for handling general goods and specialist commodities such as fish, coal, potatoes and grain. The passenger stations on Euston Road far outweighed in public attention the economically more important goods traffic to the north. King's Cross and St Pancras stations, and indeed all London railway stations, made an important contribution to the capital's economy. 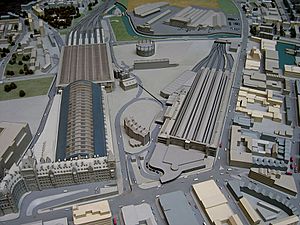 Model showing the current redevelopment of the Kings Cross area with the new High Speed 1 terminal behind the barrel vaulted St Pancras station on the left.

After World War II the area declined from being a poor but busy industrial and distribution services district to a partially abandoned post-industrial district.

Relatively cheap rents and a central London location made the area attractive to artists and designers and both Antony Gormley and Thomas Heatherwick established studios in the area. In late 1980s, a group of musicians, mechanics, and squatters from Hammersmith called Mutoid Waste Company moved into Battlebridge Road warehouse. They built huge industrial sculptures out of scrap metal and held raves. In 1989 they were evicted by police. In 1992, the Community Creation Trust took over the disused coach repair depot and built it into the largest Ecology Centre in Europe with ecohousing for homeless youngsters, The Last Platform Cafe, London Ecology Centre (after its demise in Covent Garden), offices and workshops, gardens and ponds. It was destroyed to make a car park for the Channel Tunnel Regeneration. Bagley's Warehouse was a nightclub venue in the 1990s warehouse rave scene on the site of Goods Yard behind Kings Cross stations, now part of the redevelopment area known as the Coal Drops adjacent to Granary Square.

In the 1990s the government established the London King's Cross Partnership to fund regeneration projects, and the commencement of work on High Speed 1 in 2000 provided a major impetus for other projects. Within a few years much of the "socially undesirable" behaviour had moved on, and new projects such as offices and hotels had begun to open. The area has also been for many years home to a number of trades union head offices (including the NUJ, RMT, UNISON, NUT, Community and UCU).

The area has increasingly become home to cultural establishments. The London Canal Museum opened in 1992, and in 1997 a new home for the British Library opened next to St Pancras Station. There was a small theatre, the Courtyard. However, this closed in late 2006 as a result of the gentrification of the area caused by a number of regeneration projects there, in this case, Regent's Quarter, across the boundary in Islington. The Gagosian Gallery moved their main London premises to the area in 2004. The London Sinfonietta and the Orchestra of the Age of Enlightenment are based in King's Place, on Battlebridge Basin next to the Regent's Canal. King's Place is also the home of The Guardian and The Observer newspapers, and of the UK Drug Policy Commission.

The area is expected to remain a major focus of redevelopment through the first two decades of the 21st century. The London terminus of the Eurostar international rail service moved to St Pancras station in November 2007. The station's redevelopment led to the demolition of several buildings, including the Gasworks. Following the opening of the new high speed line to the station, redevelopment of the land between the two major stations and the old Kings Cross railwaylands to the rear has commenced, with outline planning permission granted for the whole site. Detailed planning applications for each part of the site are being made on a rolling programme basis. The site is now called London King's Cross and is one of the largest construction projects in Greater London in the first quarter of the 21st century. 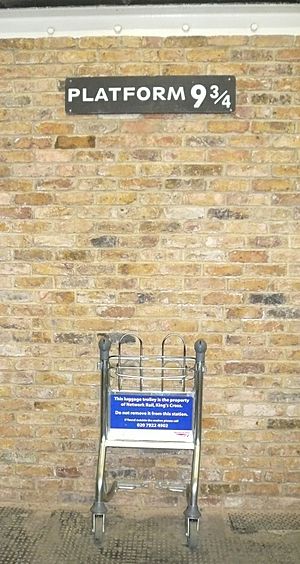 For readers of Harry Potter, London King's Cross is where the schoolboy hero boards the train for Hogwarts. The railway station has capitalised on tourist interest by putting up a sign for the fictional "Platform 9+3⁄4" described in the books, and burying a luggage trolley half into the wall. Film adaptations have used platforms 4 and 5 for some scenes.

London King's Cross and its surrounding streets were also the setting for the 1955 Ealing comedy, The Ladykillers, two British drama films starring Max Bygraves A Cry from the Streets (1958) and Spare the Rod (1961) as well as Mike Leigh's High Hopes (1988). Anthony Minghella's 2006 film Breaking and Entering is also set in London King's Cross.

"Vale Royal", an epic poem in 700 triads by Aidan Andrew Dun probes into this zone of London, Vale Royal was launched at the Albert Hall in 1995. A triad of Dun's, excerpted from another poem, "The Brill" has been installed at the western end of Granary Square in a small grove of trees beside the new Central Saint Martins. It reads: 'London Kings Cross, dense with angels and histories, there are cities beneath your pavements, cities behind your skies. Let me see!'

The Irish rock group The Pogues were founded in London King's Cross.

The British pop music duo Pet Shop Boys recorded a song featured on their 1987 album Actually named "King's Cross": the melancholy track discusses the hopelessness of the AIDS epidemic during that time and uses the Kings Cross area as the "backdrop" of the story. Tracey Thorn covered the song in 2007. Songwriter David Gedge also wrote a song called "London King's Cross" while recording under the name Cinerama.

London King's Cross and London St Pancras are the principal National Rail services in the district. St Pancras is also the Eurostar terminus for international services to Paris and Brussels. Euston station is half a mile to the west.

All content from Kiddle encyclopedia articles (including the article images and facts) can be freely used under Attribution-ShareAlike license, unless stated otherwise. Cite this article:
Kings Cross, London Facts for Kids. Kiddle Encyclopedia.