Camley Street Natural Park is an urban nature reserve in King's Cross in central London and within the London Borough of Camden. It is a local nature reserve.

Since December 2017, the park has been undergoing reconstruction and has been temporarily closed to the public. 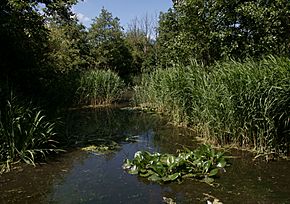 Comprising 0.8 hectares (2 acres) of land on the banks of the Regent's Canal – by St Pancras Lock and adjoining St Pancras Basin, the park is both a sanctuary for wildlife and an educational centre, forming "a lovely oasis".

It is run by the London Wildlife Trust. A visitors' centre caters for casual visitors and school parties, though tours must be booked.

In shape the park is a narrow strip of land bounded by the canal, Camley Street and Goods Way. The entrance is through an ornate gate on Camley Street.

Admission to the park is free. Its opening hours and days change with the funding it is able to win.

A variety of habitats co-exist in the park's small environs, including wetlands, meadow and woodland, which attract insects, amphibians, birds, and at least six species of mammal.

The site is divided into the following habitats:

Until the 17th century the area was in the Middlesex woodlands. In the 18th century it came under industrial use, and the Regent's Canal was built along the eastern edge of the former country estate. In the 19th century the area was used for coal chutes, first for the canal and then for the Midland Railway. Camley Street was originally known as Cambridge Street, until renamed by the LCC.

In 1984, Camden Borough Council assigned the nascent London Wildlife Trust to manage the site. The park opened in 1985.

In 2008, King's Cross Central started to plan a major development to the east and south of the park, with a footbridge across the Regent's Canal into the park.

The park hosts pond dipping and wildlife watching sessions for children. Its visitor centre is used by the Wildlife Watch Club.

According to the Mayor of London's Biodiversity Strategy, "Camley Street Natural Park, in particular, has demonstrated that a valuable wildlife space can be created from nothing to become a hub of communal and educational activity, supporting wildlife such as the reed warbler in a place where this would otherwise be unthinkable. Visitors from far and wide come to learn from this example."

All content from Kiddle encyclopedia articles (including the article images and facts) can be freely used under Attribution-ShareAlike license, unless stated otherwise. Cite this article:
Camley Street Natural Park Facts for Kids. Kiddle Encyclopedia.