There are numerous places in England called Farringdon; all meaning fern covered hill. William and Nicholas de Faringdon, whose name is likely to have originated from one of these places, were two related prominent citizens and Aldermen in the early 13th century. Nicholas purchased the area of the Farringdon ward of the City of London in 1279 and became its Alderman in 1281. In 1394 the ward was split into the still extant Farringdon Within and Farringdon Without. 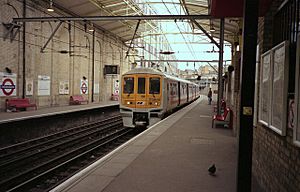 In the City of London there are two Wards for Farringdon — Farringdon Within and Farringdon Without — a situation caused by the splitting of the original Farringdon Ward in 1394. "Without" and "Within" denote whether the Ward fell outside or within the London Wall — this was also the case for the Wards of Bridge Within and Bridge Without. These Wards cover a fairly considerable part of the City, though before 2004 these Wards covered an even wider area: Farringdon Without stretched from Chancery Lane including Middle Temple, Inner Temple and across to Smithfield while Farringdon Within covered the area within the Walls across to Cheapside at Wood Street and included New Change and Blackfriars Bridge. Blackfriars and St Bartholomew's Hospital.

A major review of the City's Wards in 2003, effected in 2004, removed from Farringdon Without the areas north of Fleet Street between Fetter Lane and Farringdon Street and south of Fleet Street between New Bridge Street and Temple Avenue to Castle Baynard Ward. However a 'corridor' connects the western area along Holborn to Smithfield. The area of Farringdon Within at Cheapside was transferred to Bassishaw Ward; the area around Blackfriars Lane and the Blackfriars Bridge was assigned to Castle Baynard.

A map based on Stow c 1600 shows the Fagswell Brook south of Cowcross Street as the northern boundary of the City with the bar at Long Lane.

The extent of the area around Farringdon Station which is sometimes referred to as Farringdon cannot be exactly defined; this contemporary usage is most likely a back-formation and its use is similar to that in the Victoria area.

Planned redevelopment and expansion of Farringdon Station is expected to have a significant effect on the local area. The station is currently served by the Thameslink north-south rail route; it is planned that this will be supplemented by a future east-west Crossrail service which will require the construction of additional station entrances. Crossrail opened an Information Exchange in Farringdon in 2004 to aid consultation with local stakeholders. A proposed upgrade of the Thameslink route would also affect the local area, including the construction of further station entrances, the pedestrianisation of Cowcross Street and the demolition of several buildings. The area forms part of the City Fringe Partnership, an initiative between the City of London and other local authorities to revive parts of Inner London immediately adjacent to the City. In 2008 a plan to significantly redevelop the area, including the demolition of part of Smithfield Market, was rejected by the Department of Communities and Local Government.

All content from Kiddle encyclopedia articles (including the article images and facts) can be freely used under Attribution-ShareAlike license, unless stated otherwise. Cite this article:
Farringdon, London Facts for Kids. Kiddle Encyclopedia.