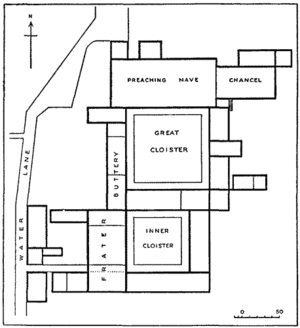 Ground plan of Blackfriars Monastery as they appeared before the dissolution. The Buttery became Farrant's; the Frater, Burbage's playhouse. 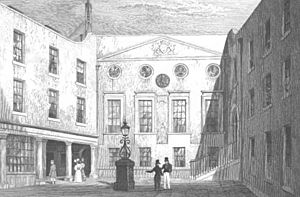 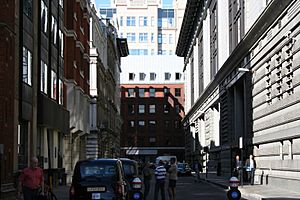 Blackfriars is home to many investment banks and financial services companies

Blackfriars is an area of central London, which lies in the south-west corner of the City of London.

The name Blackfriars was first used in 1317 (as Black Freres from the French 'frère' meaning 'brother') and derives from the black cappa worn by the Dominican Friars who moved their priory from Holborn to the area between the River Thames and Ludgate Hill in 1276. Edward I gave permission to rebuild London's city wall, which lay between the river and Ludgate Hill, around their area. The site was used for great occasions of state, including meetings of Parliament and the Privy Council, as well as the location for a divorce hearing in 1529 of Catherine of Aragon and Henry VIII. The priory was eventually closed in 1538 during Henry's Dissolution of the monasteries. Katherine Parr, Henry VIII's sixth and final wife, was born in the area.

Some of the buildings were subsequently leased to a group of entrepreneurs who created the Blackfriars Theatre on the site, not far from Shakespeare's Globe Theatre which sat almost directly across on the other side of the river. In 1632, the Society of Apothecaries (a livery company), acquired the monastery's guesthouse and established their base there. The building was destroyed in the Great Fire of London but the Society rebuilt and Apothecaries Hall is still to be found in Blackfriars today.

The area is now the location of Blackfriars station, and forms the northern bridge-head for both Blackfriars Bridge and Blackfriars Railway Bridge. Alongside the road bridge is Blackfriars Millennium Pier, a stop for river bus services on London River Services.

The Victoria Embankment stretches along the north bank of the river west from Blackfriars to Westminster Bridge. Notable buildings in the area include the large Art Deco Unilever House, and the Art Nouveau Black Friar pub.

The older parts of Blackfriars have regularly been used as a filming location in film and television, particularly for modern films and serials set in Victorian times, notably Sherlock Holmes and David Copperfield.

All content from Kiddle encyclopedia articles (including the article images and facts) can be freely used under Attribution-ShareAlike license, unless stated otherwise. Cite this article:
Blackfriars, London Facts for Kids. Kiddle Encyclopedia.