Kids Encyclopedia Facts
This page is about the area of London. For the village in Cumbria, see Dalston, Cumbria. For other uses, see Dalston (disambiguation).

Dalston is an area of East London, in the London Borough of Hackney. It is 4 miles (6.4 km) north-east of Charing Cross. Dalston began as a hamlet on either side of Dalston Lane, and as the area urbanised the term also came to apply to surrounding areas including Kingsland and Shacklewell, all three of which being part of the Ancient Parish of Hackney.

The area has experienced a high degree of gentrification in recent years, a process accelerated by the East London line extension, now part of London Overground, and the reopening of Dalston Junction railway station, part of London's successful bid to host the 2012 Olympics.

Dalston has never been an administrative unit, and partly for this reason the boundaries are not fully defined. There are popularly understood boundaries in the south and west, but its northern and especially eastern extent is not delineated. This is a common situation in London’s neighbourhoods which often merge, overlap and change over time. There is an electoral Ward of the same name which covers a part of the north–west of Dalston.

Dalston’s boundaries are described with more or less precision below:

The name Dalston is thought to have derived from Deorlaf's tun (farm) in much the same way as nearby Hoxton was named after the farm of "Hoch". The first written record available is from 1294 when the name was written as Derleston.

The village was one of four small villages within the Parish of Hackney (along with Newington, Shacklewell, and Kingsland) that were grouped for assessment purposes, together having only as many houses as the village of Hackney.

John Rocque's map of 1746 shows the village of Kingsland centred on the crossroads at what is now Dalston Junction and the small village of Dalston further east along Dalston Lane. Another clear feature is Roman Ermine Street which now forms most of the western boundary of this area. Ermine Street now has the road number A10 and goes by a number of names, including Kingsland Road as it travels through London.

Around AD 1280 a leper hospital was founded in Dalston by the citizens of London and in AD 1549 it was attached to the chapel of St Bartholomew as an outhouse.

During the 18th and 19th centuries the area changed from an agricultural and rural landscape to urban one. By 1849, it was described as a recently increased suburban village, with some handsome old houses, and by 1859 the village had exceeded its neighbour and, with the railways and continuous building, the village of Kingsland disappeared.

During the 1930's, 40'sand 60's the areas large Jewish and other minority populations made it a target for provocative rallies by Oswald Mosley and the various organisations he founded. These were actively opposed by many local people, together with organisations such as the 43 Group and this led to a number of violent confrontations, notably in the Ridley Road area.

Dalston is known for music, events and its nightlife. Its biggest festival to date began in 2015, Dalston Music Festival. Centred on Gillett Square and 8 clubs in the surrounding area, it was founded by Andrew Bunsell of Dalston Studios. 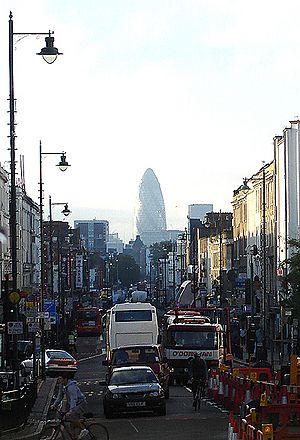 Contemporary Dalston is a lively neighbourhood with an ethnically varied population. Architecturally it is a mixture of 18th and 19th century terraced houses and 20th century council estates. It is currently undergoing rapid gentrification, partly because of the redevelopment of the railway station at Dalston Junction and partly due to the revitalisation of large parts of east London in the build-up to the 2012 Olympics. (Hackney was one of the four host boroughs of the Games.)

Dalston has attracted immigrants for over 100 years; at the turn of the century it was a popular area for newly arrived Jewish people from central Europe. In the 1950s and '60s, as the Jewish community became more affluent and moved out, they were replaced by a large Caribbean community, which accounts for the wide choice of Caribbean food available in Ridley Road. As the Caribbean community slowly drifted out of Dalston it then became popular with the Turkish, as well as the Vietnamese. Recent arrivals include Poles, judging by the numbers of Polish delicatessens now appearing and other stores catering to Polish tastes.

Fassett Square was the inspiration for the BBC soap EastEnders. Originally, there were plans to film the series there, on location. However, Fassett Square (Albert Square) and Ridley Road Market (Walford Market) were rebuilt on the set in Elstree, near Borehamwood, to have a more controlled filming environment. The idea of Walford stems from Walford Road, and many of the houses on the show use the same exterior design. Coincidentally both Barbara Windsor and Tony Holland, one of the original creators of the show, lived at different times on the street.

The Hackney Peace Carnival Mural created in 1985, depicts a group of people marching for peace against "the bomb" and has become an important cultural statement from that era. It can be found opposite Dalston Junction Overground station on Dalston Lane. It has also been used on the cover of an album by local group Rudimental.

That is not the only connection with entertainment industry. Around the corner, music hall artist Marie Lloyd (1870–1922) used to reside on Graham Road. The house now has a blue plaque.

In April 2009 the Guardian published an article on Dalston claiming that it was the "coolest" place to live in Britain. In the same year however, sculpture park The Towers of Hackney was torn down to give way to new buildings.

Dalston has two main stations, Dalston Kingsland and Dalston Junction, both served by London Overground and linking with west and south London. Haggerston railway station straddles the boundary between Haggerston and Dalston. Dalston has no direct rail link to central London; passengers often change at Highbury & Islington station for the London Underground.

A new station in Dalston is proposed for the Crossrail 2 line.

From 4 June 2011, bus route 488 was extended to Dalston from its previous terminus at Clapton.

Dalston Bus Garage on Shrubland Road has been demolished.

All content from Kiddle encyclopedia articles (including the article images and facts) can be freely used under Attribution-ShareAlike license, unless stated otherwise. Cite this article:
Dalston Facts for Kids. Kiddle Encyclopedia.