Walthamstow (/ˈwɔːlθəmstoʊ/ or /ˈwɒlθəmstoʊ/) is the principal town of the London Borough of Waltham Forest in North East London, England. It is located 7.5 miles (12.1 km) northeast from Charing Cross.

Historically in the county of Essex, it significantly increased in population as part of the suburban growth of London and was incorporated as a municipal borough in 1929 before becoming part of Greater London in 1965.

Walthamstow is a large town, situated between the North Circular Road to the north, Lee Valley and the Walthamstow Reservoirs to the west, and Epping Forest to the east. The town centre consists of Walthamstow Market, the longest single street market in Europe.

Walthamstow is recorded c. 1075 as Wilcumestowe ("the Place of Welcome") and in the Domesday Book of 1086 as Wilcumestou.

King John visited Shern Hall (Shernhall Street) in 1213; the building survived until 1896. At one point Walthamstow was just a culmination of five small villages, and affairs were discussed at Vestry House, acting as the first town hall. In 1870 it had grown to the size of a small suburb and a town hall was built in Orford Road from which affairs of the village were run (which now takes place in Forest Road - since 1941). Until the 19th century it was largely rural, with a small village centre (now Walthamstow Village — see below) and a number of large estates.

The main route through the district was the aforementioned Hoe Street. Additionally, there were various smaller lanes, crossing the town. The road now known as Forest Road was originally called Clay Street. Further south, the High Street was named Marsh Street, and led from the original settlement out to the marshes. Shernhall Street is an ancient route, as is Wood Street, to the east. In the 1660s Sir William Batten, Surveyor of the Navy, and his wife Elizabeth Woodcocke had a house here where, according to Samuel Pepys, they lived "like princes" and cultivated a vineyard. 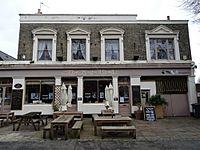 With the advent of the railways and the ensuing suburbanisation in the late 19th century, Walthamstow experienced a large growth in population and speculative building. 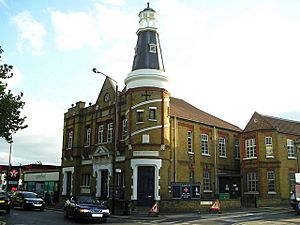 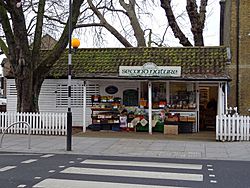 The Grade II listed building of the former Jones's Butchers Shop in Wood Street, dating back to the late 18th century

The Lighthouse Methodist Church which dates from 1893 which is situated on Markhouse Road, on the corner of Downsfield Road. There is a lantern at the top of the tower, which also contains a spiral staircase. The church was erected because of the generosity of Captain David King of the shipbuilding firm of Bullard King & Co which also ran the Natal Direct Shipping Line, which ran ships direct from London to Durban without stopping at the Cape.

The LGOC X-type and B-type buses were built at Blackhorse Lane from October 1908 onwards. The B-type is considered one of the first mass-production buses. The manufacturing operation later became AEC, famous as the manufacturer of many of London's buses. On 13 June 1909, A. V. Roe's aircraft took to the air from Walthamstow Marshes. It was the first all-British aircraft and was given the ominous nickname of the "Yellow Terror" but officially carried the name Avro1. Roe later founded the Avro aircraft company, which later built the acclaimed Avro Lancaster.

From 1894 Walthamstow was an urban district and from 1929 a municipal borough in Essex. In 1931 the population of the borough, covering an area of 4,342 acres (17.57 km2), peaked at 132,972. In 1965 the borough was abolished and its former area merged with that of the Municipal Borough of Chingford and the Municipal Borough of Leyton to form the London Borough of Waltham Forest in Greater London. Other places in east London formerly of the county of Essex, such as Ilford and Romford were placed into London Boroughs along with Walthamstow. None of the postal district names or codes was changed at this time (e.g. Ilford remained Ilford, Essex, and Walthamstow remained London E17).

Since the 2012 Summer Olympics, the town has become increasingly popular mostly as a result of gentrification. Local property prices have increased at a high rate of 22.3% from 2013-2014, compared to London's average of 17.8%. It has turned Walthamstow into a 'trendy' town similar to Shoreditch, and has earned the nickname Awesomestow as a result. The leafy Walthamstow Village in particular has become sought-after by buyers.

On 29 May 2015, a regular local unicyclist was hit and dragged under by a double decker route 212 bus in Hoe Street. Locals numbering up to 100 people helped to pull the bus off the unicyclist. The MP for Walthamstow, Stella Creasy, later said she was "proud" of the community for saving the unicyclist's life.

Walthamstow is bordered to the north by Chingford, south by Leyton and Leytonstone, east by the southern reaches of Epping Forest at Woodford and west by Tottenham and the River Lea valley. Leyton High Road, Hoe Street, Chingford Road, Chingford Mount (passing south-north through Walthamstow and its neighbouring towns) form part of an ancient route from London to Waltham Abbey. 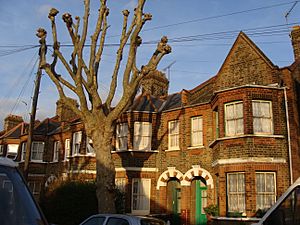 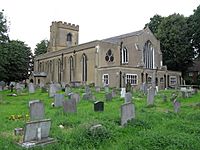 St Mary The Virgin, the oldest building in Walthamstow, dating as far back as the 13th century

Walthamstow Central is the main town centre and includes Selborne Road and the High Street.

Walthamstow Village conservation area is a peaceful and attractive district to the east of what has become the commercial centre of Walthamstow. The area is roughly defined as being south of Church Hill, west of Shernhall Street, north of Grove Road and east of Hoe Street. Orford Road is the main route through the district, though even this is a quiet thoroughfare by the standards of London. The village has a small selection of specialist shops, pubs and restaurants, and house prices tend to be higher in the streets of this neighbourhood. It was voted best urban village in London by Time Out magazine in 2004.

Upper Walthamstow is to the east of Walthamstow Village. The area's main thoroughfare is Wood Street, which has a good selection of shops and local businesses, and is served by railway, with a railway station on the Liverpool Street to Chingford line.

Wood Street is home to Wood Street Indoor Market. The market was the site of a cinema from 1912 to 1955, operated by the Penny Picture Theatre Co. It re-opened under new independent management in 1953 as the Rio Cinema, but this was short lived and it closed in 1955. Now the market is filled with quirky market traders, and was documented in a short documentary made by Mark Windows.

Walthamstow has a wide variety of housing stock, but the vast majority of residential property was built in the early 20th century. From Coppermill Lane in the west (next to the marshes), to Wood Street in the east, there are scores of terraced streets dating to the Edwardian era and the 1920s. The area along Markhouse Road and St James Street has many examples of Warner properties. These were developed as affordable housing for the working classes in the early part of the 20th century. Bombing raids in the Second World War and urban redevelopment projects in the 1960s and 1970s have left areas with more modern housing, mostly in the shape of low-rise concrete blocks.

The northern continuation of Markhouse Road is St James's Street to which Blackhorse Road follows, served by underground and railway stations, which in turn becomes Blackhorse Lane. This is bound on its western side by industrial units and warehouses. The London Borough of Waltham Forest has proposed developing the area around Blackhorse Road railway station to become a gateway to the town.

Highams Park and Hale End, though both in the E4 postcode, are historically part of Walthamstow. 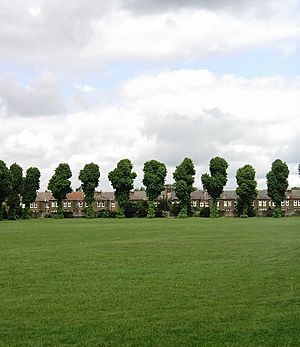 Although bounded by the marshes to the west and parts of Epping Forest to the east, there is little open space in the actual town. There used to be two commons in the town, Church Common, adjacent to St. Mary's Church in Walthamstow Village and Markhouse Common, located off Markhouse Lane (now Markhouse Road) and what is now the western end of Queens Road. Both open spaces were lost in the 19th century, when the land was sold to property developers. Lloyd Park has been open to the public since 1900 and is located in Forest Road behind the William Morris Gallery. It has a formal garden with a pond, and the adjacent Aveling Field has facilities for bowling, tennis, basketball, an outdoor gym, a skate park and a children's play area.

As of the 2011 census, White British is the largest ethnic in all wards. Other White is the second largest in all wards except Markhouse. The other double-digit ethnics are Pakistani and Black African. The highest White British ward is Chapel End (35%), whereas the lowest is Markhouse (24%). Other White is largest in High Street (18%) and lowest in Wood Street (14%). Pakistani is highest in Markhouse (18%) and lowest in both Chapel End and Higham Hill (9%). Black African is largest in Higham Hill (10%). 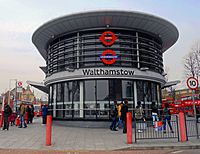 Lea Bridge is in the far southwestern edge of Walthamstow, near Upper Clapton. The station was opened in 2016. All other stations in the area are operated by Transport for London (TfL) services.

Walthamstow lost its rail link to Stratford with the removal of the 550 yards length of track known as the Hall Farm Curve in 1970, and there have been campaigns for its re-instatement.

Walthamstow was home to the popular 1990s boy band East 17, who named themselves after the area's postal code E17, and titled their debut album Walthamstow. The indie rock band The Rifles are from the area as was Jimmy Ray. Ray grew up in the Lloyd Park area and attended Winns primary, and Sidney Chaplin and McEntee secondary schools. In the early 1990s he performed at various E17 venues, including the Royal Standard, as part of local pop group 'The Cutting Room'. Ray later had solo hits in the UK and US. It is home to the band The Bevis Frond.

Walthamstow is a major centre in London's grime music scene, with many bedroom studios and underground music enterprises. Artists include Lethal Bizzle and his band Fire Camp.

Walthamstow is mentioned in the Paul McCartney and Wings song "Old Siam, Sir" from the 1979 album Back to the Egg.

"Long ago, outside a chip shop in Walthamstow" is the first line of a song named "Ann and Joe", recorded by The Barron Knights in the late 1970s. This was a spoof of "Long ago, high on a mountain in Mexico", the opening words of Angelo, which was a UK number one hit in 1977 for Brotherhood of Man.

"Waiting in Walthamstow" is a song by The Cranberries from the album Roses.

The track the "Battle of Epping Forest" by Genesis on the album Selling England by the Pound has lyrics based in the area such as "Along the Forest Road, there's hundreds of cars - luxury cars."

The artwork for Blur's Parklife album featured photos of the band at Walthamstow Stadium. 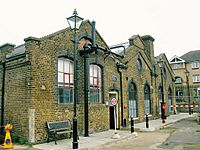 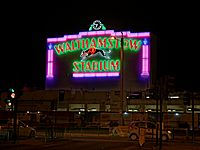 The Walthamstow Studios operated between 1914 and 1930. EMD (Granada) Walthamstow on Hoe Street closed in 2003 when it was sold to the Universal Church of the Kingdom of God (UCKG) but permission for a change of use to a place of worship was repeatedly refused. In 2014 it was sold to a pub company who set up a bar in the grand foyer and tentatively began bringing it back into use as a venue. The Empire cinema opened in December 2014.

All content from Kiddle encyclopedia articles (including the article images and facts) can be freely used under Attribution-ShareAlike license, unless stated otherwise. Cite this article:
Walthamstow Facts for Kids. Kiddle Encyclopedia.