Kids Encyclopedia Facts
Not to be confused with Leyton.

The main thoroughfare, High Road Leytonstone, running the length of Leytonstone to Stratford, is an ancient pathway dating to pre-Roman times.

The stone and obelisk

Roman archaeological features have been found in the area. "There was a Roman cemetery south of Blind Lane, and massive foundations of some Roman building, with quantities of Roman brick, were discovered in the grounds of Leyton Grange."

The High Stone at the junction of Hollybush Hill and New Wanstead, near the eastern boundary of the parish at the junction of the roads from Woodford and Woodford Bridge, is a restored 18th-century obelisk set up on an earlier stump which has been traditionally described as a Roman milestone.

Two of the obelisk's inscriptions are still just legible: others are not.

The earliest known cartographic reference to Leytonstone is dated from 1545. Leytonstone was the centre of protests against the construction of the M11 link road, in the early 1990s.

Leytonstone High Road was a Roman track from London to Epping Forest. This route became important for long distance coaches from the 14th century. In the 1960s there was a problem of congestion around the shopping streets in Leytonstone, a problem which continues with the one way system today. In the 1990s the M11 link road was built through the area despite a long running protest by locals and road protestors. This and other protests led to the Conservative policy, Roads for Prosperity, being abandoned.

Leytonstone tube station is on the Central line of the London Underground. 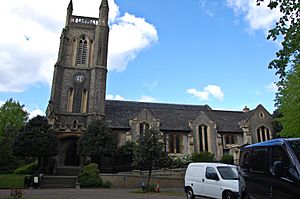 Church of St John the Baptist

In drama, film and television

All content from Kiddle encyclopedia articles (including the article images and facts) can be freely used under Attribution-ShareAlike license, unless stated otherwise. Cite this article:
Leytonstone Facts for Kids. Kiddle Encyclopedia.