Great Dunmow is a historic market town and civil parish in the Uttlesford district of Essex, England. It is situated on the north of the A120 road, approximately midway between Bishop's Stortford and Braintree, 6 miles east of London Stansted Airport.

Originally the site of a Roman settlement on Stane Street, the town thrived during the Middle Ages. Many buildings survive from this period, including a sixteenth-century town hall. Dunmow means "Meadow on the Hill". The settlement was variously referred to as Dunmow Magna, Much Dunmow, or most commonly Great Dunmow. As of 2021, Robert Nicholson is Emeritus Mayor of Great Dunmow. 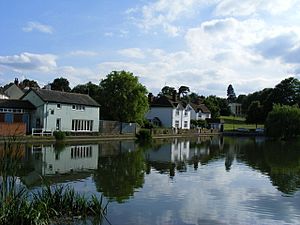 The town's history is explained in the Maltings Museum on Mill Lane.

A Roman small town developed on the junction between Stane Street and the Roman roads which ran north-east to south-west from Sudbury to London and north-west to southeast from Cambridge to Chelmsford. The main settlement area spread westwards from the road junction, with cemeteries on the outskirts. There was a second Roman settlement at Church End immediately to the north of present-day Great Dunmow. The site likely included a rural Roman Temple.

Between the occupation by the Romans and the time of the Saxons, the town acquired its name – in AD951 it was named Dunemowe, and later Dommawe. In the Domesday Book, Dunmow had seven manors, some of which still exist, in name at least – including Bigods, Newton Hall, Merks Hall, Minchins and Shingle Hall. The earliest record of a church in the town is in 1045, and in 1197 Geoffrey de Dunmow was rector.

In medieval times, Dunmow was a thriving commercial centre, with market charters granted in 1253 and two fairs held annually until the 19th century. Dunmow's Corporation was granted in 1555 and confirmed in 1590.

Both Roman settlements were reoccupied during the Saxon period, at Great Dunmow in the seventh century and at Church End in the later Saxon period. The earliest medieval settlement appears to have been a continuation of the late Saxon settlement at Church End, where the parish church is located. The granting of a market charter may mark the time of the movement of the main focus of settlement from Church End to the High Street and market-place. The medieval and post-medieval development of Great Dunmow is reflected both in the surviving built heritage, which includes 167 Listed Buildings and the below-ground archaeology.

Great Dunmow was located on the GHQ Line, a series of defences and concrete Pillboxes built to hinder an anticipated German invasion. Many of these still remain and are clearly visible along the Chelmer Valley, one being located on the west bank of the River Chelmer in meadows behind the Dourdan Pavilion and recreation ground.

Easton Lodge became RAF Great Dunmow in World War II and for a time was home to squadrons from the USAAF and the RAF. The site of the former air field is now owned by Land Securities who hope to build a development including around 9,000 homes alongside significant supporting community, commercial and retail infrastructure, intending to call it Easton Park. The crews of two aircraft based at RAF Great Dunmow were killed in aircraft crashes very close to the town on 20 March and 21 November 1945.

A recently declassified military nuclear bunker on the outskirts of the town was sold for a reported £22,000 and is now used as a secure data centre for nuclear weapons research.

Great Dunmow is 8.3 miles (13.4 km) from Braintree railway station (63 minutes to London Liverpool Street) to the east and 9.2 miles (14.8 km) from Bishop's Stortford (45 minutes to London Liverpool Street and 35 minutes to Tottenham Hale) to the west. Until 1952 the town was served by the Bishop's Stortford-Braintree Branch Line a line between these stations, which opened to passengers on 22 February 1869 and closed on 3 March 1952. The line continued in use for freight trains and occasional excursions, closing in stages with the final section to Easton Lodge closing on 17 February 1972. It is now possible to walk or cycle in either direction along the former track bed to Braintree station, or to the edge of Bishop's Stortford.

As the crow flies it is just under 6 miles (10 km) from Stansted Airport and the nearby M11 motorway to the west.

The A120 from the M11 to Braintree by-passes the town, the former route has now been re-designated the B1256. The latter itself was a bypass, built on the route of the old railway line and station. Until the 1970s the A120 went through Great Dunmow town centre.

The town is well known for its four-yearly ritual of the "Flitch Trials", in which couples must convince a jury of six local bachelors and six local maidens that, for a year and a day, they have never wished themselves unwed. If successful the couple are paraded along the High Street and receive a flitch of bacon. The last flitch trials were held in the town in the summer of 2012, with the next scheduled for 2016. The custom is ancient, and is mentioned in the Wife of Bath's Prologue and Tale in Chaucer's The Canterbury Tales. It acts as a major plot point in Made in Heaven (1952 film).

Great Dunmow is twinned with the following town:

All content from Kiddle encyclopedia articles (including the article images and facts) can be freely used under Attribution-ShareAlike license, unless stated otherwise. Cite this article:
Great Dunmow Facts for Kids. Kiddle Encyclopedia.