Bishop's Stortford is a historic market town and civil parish in Hertfordshire, England. It is just west of the M11 motorway on the county boundary with Essex and is the closest sizeable town to London Stansted Airport. Bishop's Stortford is 27 miles (43 km) north east of Charing Cross in central London and 35 miles (56 km) from Liverpool Street station, the London terminus of the line to Cambridge that runs through the town. Bishop's Stortford has a population of 38,202, adjusting to 37,838 at the 2011 Census. 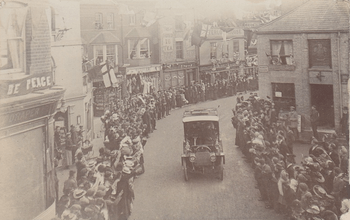 Nothing is known of Bishop's Stortford until it became a small Roman settlement on Stane Street, the Roman road linking Braughing and Colchester. The settlement was abandoned in the 5th century after the breakup of the Roman Empire.

A new Saxon settlement grew up on the site, named Steort-ford, the ford at the tongue of land. In 1060, William Bishop of London bought Stortford manor and estate for eight pounds, leading to the town's modern name. At the time of the Domesday Book the village had a population of around 120. The Normans built a wooden motte-and-bailey edifice known as Waytemore Castle (see below).

Only the baptismal font survives from the Norman church of St Michael's, which was rebuilt in the early 15th century and altered and restored in the 17th and 19th centuries. Its conspicuous belfry and spire were built in 1812. 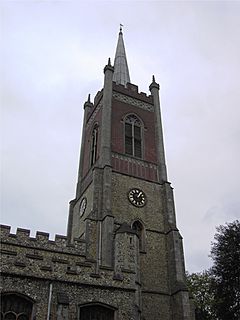 Despite outbreaks of the plague in the 16th and 17th centuries, the town continued to grow, reaching a population of about 1,200.

The River Stort is named after the town, and not the town after the river. When cartographers visited the town in the 16th century, they reasoned that the town must have been named for the ford over the river and assumed the river was called the Stort.

After 1769, the River Stort was made navigable, and the town became a stop on the mail coach road between Cambridge and London.

By 1801, Bishop's Stortford was a market town, and a corn exchange had been established. while the main industry was malting. In 1842 the railway came to Bishop's Stortford. Another Victorian introduction was the opening of a hospital in 1895.

During World War II, Bishop's Stortford was the evacuation centre for many Britons, including Clapton Girls Technology College. By 1951, Bishop's Stortford's population had reached 13,000, and growth as a commuter town continued through the second half of the 20th century. The M11 motorway, Stansted Airport, and rail links to London and Cambridge contributed to its rise in population to about 35,000 in the 2001 national census.

Of the six suburbs of Thorley, Thorley Park, Havers, Bishop's Park, St Michael's Mead and Hockerill, the last is a separate ecclesiastical parish east of the River Stort, centred around the old coaching inns, All Saints in Stansted Road and the railway station. Post-war development has enlarged the town's area further. 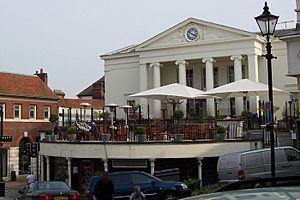 In March and April 1825, a number of buildings in Bishop's Stortford were set alight, causing great alarm. A committee that formed offered a £500 reward for information on the arsonist. Several threatening letters were received, warning, for example, that "Stortford shall be laid in ashes". Thomas Rees was arrested and found guilty on the charge of sending the letters, but not of arson. He was transported to Australia as a convict.

In 1935 the parish church of All Saints was destroyed by fire, and in 1937 a new church, to a spacious, light, and airy design by the architect Stephen Dykes Bower, was erected in its place. This is a Grade II listed building and the tower dominates the eastern skyline of the town. The church contains a notable rose window designed by Hugh Ray Easton and a two-manual Henry Willis II organ. Concerts are also held there. 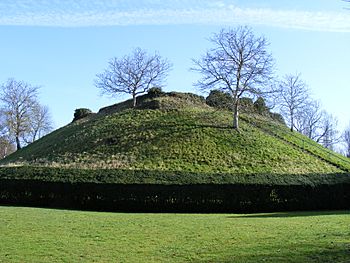 Waytemore began as a motte and bailey castle in the time of William the Conqueror. A rectangular great tower was added to the motte in the 12th century. It was improved in the 13th century under King John and a licence for crenellation was granted in the mid-14th century. It lost significance after the Civil War and was used as a prison in the 17th century.

Only earthworks, the large motte, and the foundations of a square tower can now be seen.

The town centre recently underwent changes with the demolition of a multi-storey car park and surrounding area to make way for a new town centre area and city-type apartments and penthouses on the riverside and elsewhere. Jackson Square (a modern shopping complex) was rebuilt and an extension added. The Havers estate, on the edge of the town, is being redeveloped with new houses and flats. 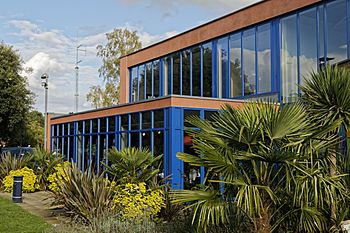 The Rhodes Arts Complex incorporates a theatre, cinema, dance studio and conference facilities. Situated within the complex, in the house where Cecil Rhodes was born, is the Bishop's Stortford Museum. It has a local history collection, a unique collection relating to Rhodes and the British Empire in Africa, as well as a temporary exhibition gallery.

Bishop's Stortford owes its continued growth to developments in transport. It is well served by all forms: 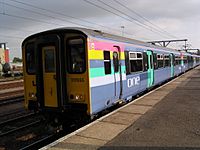 Abellio Greater Anglia train, in the previous "one" livery, that serves Bishop's Stortford

Bishop's Stortford is close to junction 8 of the M11 motorway, which runs from London and the M25 north to Cambridge, and the town is a frequent stop-off point for travellers using the nearby Stansted Airport. To the north of the town is the A120, which meets the A10 at Buntingford to the west and the A12 at Colchester to the east.

Stansted Airport is on the town's doorstep, with easy transport via rail or bus between there and the town. This airport is mainly used for flights to Europe and is the third largest airport serving London.

Semi-professional football team Bishop's Stortford F.C. were formed in 1874, and play at Woodside Park in the town. Currently members of National League South, the sixth tier of the English football pyramid, the club have won two national titles - the 1973–74 FA Amateur Cup and the 1980-81 FA Trophy, the first club to win both competitions.

Bishop's Stortford Hockey Club share the Cricket Field Lane clubhouse with the cricket club and have 10 senior sides – 6 men's and 4 ladies' – along with a junior section. The club has a number of former international players still involved with coaching or playing, including Rob Clift (gold medalist), in addition to a number of senior members who still represent their country at Masters level.

Public sports facilities including the Grange Paddocks swimming pool and gym, a tennis club, a squash club, and a golf club.

The town is home to various youth organisations and youth groups, including an Army Cadet Force detachment and an Air Training Corps Squadron. GAP Youth Group is affiliated with St James the Great Church in Thorley.

Rhodes Arts Complex is the town's largest live music venue. A recipient of a National Lottery grant in 2006, the venue hosts both local and international artists, including Midge Ure, The Beat, Ade Edmondson. 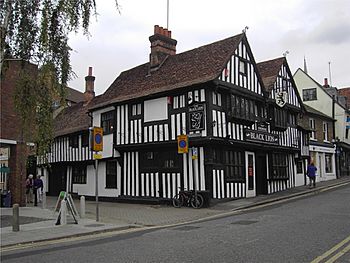 Being a market town and major coach stop between London and Cambridge, Bishop's Stortford has many large public houses within the town centre. In 1636 The Star in Bridge Street was run by John Ward. The Inn was acquired by Hawkes and Co. and bought in 1808. In the early 20th century The Star catered for cyclists, providing cycle sheds that attracted people from local villages. John Kynnersley Kirby (1894–1962), painted local scenes and portraits of local characters, painted the interior of The Star for a painting entitled 'The Slate Club Secretary'.

Other public houses included the 15th century Boars Head, 16th century Black Lion, and the Curriers, now a restaurant. Between 1644 and 1810, The Raindeer operated which is now the site of the Tourist Information Centre.

Located in the town centre is Anchor Street Entertainment, a multiplex which contains a cinema, health club, bowling alley, and a number of food outlets. A concrete skateboard park and metal halfpipe is located in the town park. The town is home to two amateur dramatics groups, The Water Lane Theatre Group and Bishop's Stortford Musical Theatre Company.

Being in the southeast, the town enjoys a warmer climate than most of Britain and has some of the hottest summers in Britain; it is also one of the driest places in the country. Temperatures may sometimes reach the mid-30s Celsius in the summer. Snow is often seen in the winter months because the town is near to the east coast, where cold, moist air is brought in from the North Sea and cold fronts from northern Europe. In recent years there has been up to three inches of snow early in the year which has resulted in minor disruption to transport and caused some schools to close for several days. However, the snow tends not to persist in any noticeable quantity.

Water for the town is supplied by Veolia Water Central. The water is classed as very hard with over 345 mg/l of minerals and 0.225 mg/l of fluoride.

Typically, the Bishop's Stortford area will receive an average of 622mm of rain during the course of the year.

All content from Kiddle encyclopedia articles (including the article images and facts) can be freely used under Attribution-ShareAlike license, unless stated otherwise. Cite this article:
Bishop's Stortford Facts for Kids. Kiddle Encyclopedia.