Saffron Walden is a market town in the Uttlesford district of Essex, England. It is 12 miles (19 km) north of Bishop's Stortford, 18 miles (29 km) south of Cambridge and 43 miles (69 km) north of London. The town retains a rural appearance and has buildings dating from the medieval period onwards. In 2001 the parish had a population of 14,313, which had increased to 15,504 by the 2011 census.

Archaeological evidence suggests continuous settlement on or near the site of Saffron Walden from at least the Neolithic period. It is believed that a small Romano-British settlement and fort – possibly in the area round Abbey Lane – existed as an outpost of the much larger settlement of Cestreforda to the north. 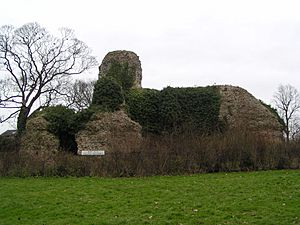 The remains of 12th-century Walden Castle

After the Norman invasion of 1066, a stone church was built. Walden Castle, dating from about 1140, may have been built on pre-existing fortifications. A priory, Walden Abbey, was founded under the patronage of Geoffrey de Mandeville, first Earl of Essex about 1136, on the site of what is now Audley End village. The abbey was separated from Walden by Holywell Field. After the dissolution of the monasteries, Sir Thomas Audley converted its cloisters into a dwelling. Later this became the site of Audley End House. 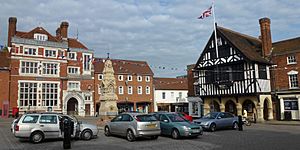 The market square in July 2012, with the half-timbered Guildhall

The market was moved from nearby Newport to Saffron Walden during de Mandeville's tenure, increasing the town's influence. This Tuesday market was held from 1295. The town’s first charter was granted in about 1300, to what was known then as Chepyng (i. e. Market) Walden. The town at that time was largely confined to the castle's outer bailey, but in the 13th century the Battle or Repel Ditches were built or extended to enclose a larger area to the south. The focus of the town moved southwards to Market Square.

The main trading item in medieval times was wool, and a guild hall was built by the wool-staplers in the market place. This was demolished in 1847 to make way for a corn exchange. In the 16th–17th centuries the saffron crocus (Crocus sativus) was widely grown, thanks to the town's favourable soil and climate. The flower was valuable, as the extract from the stigmas was used in medicines, as a condiment, in perfume, as an aphrodisiac, and as an expensive yellow dye. The industry gave Walden its name. 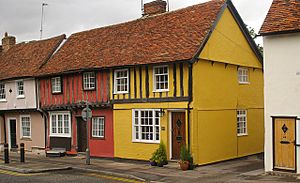 The town and surrounding area, like much of East Anglia, was strongly Puritan during the 17th century. The population was influenced by the missionary John Eliot. By 1640, Samuel Bass's family and a number of others had departed for the Massachusetts Bay Colony as part of the Great Migration.

Saffron Walden was at the centre of the Eastern Association during the English Civil War. While the town was the headquarters of the New Model Army, Lieutenant-General of Horse, Oliver Cromwell paid a 19-day visit in May 1647, taking part in debates to seek a settlement between Parliament and the army. He is thought to have stayed at the Sun Inn.

By the end of the 18th century saffron was no longer in demand and the industry was replaced by malt and barley. More than 40 maltings stood in the town by the end of the century. The trade was less lucrative than saffron, but the town continued to grow through the 19th century, and had a cattle market, corn exchange and other civic buildings. During this time Quakers became active. The influential Gibsons – one of the founding families of Barclays Bank – aided the construction of several public buildings that remain today, such as the museum and town hall.

In the 1900s the Saffron Walden branch railway line from Audley End station, on the mainline from London to Cambridge, was extended to Bartlow. The branch succumbed to the Beeching cuts in the 1960s.

Heavy industry arrived after the Second World War. Acrows Ltd, makers of falsework, built premises to the east of the town and became a significant employer and economic influence in the area. For a short time there was a dedicated railway station for the works known as Acrow Halt. Light industry was added to the south of the town at Shire Hill. As the agricultural economy continued to mechanise, the new employment opportunities were welcome and migration into the town from surrounding villages led to a major expansion of housing estates in the 1970s and 1980s.

Coat of arms and maces

Saffron Walden's unofficial coat of arms showed the saffron crocus within the walls of the castle in the form of an heraldic pun – as in, "Saffron walled-in". In 1961, a formal coat of arms was granted by the College of Arms and this was adapted in 1974 into its current form.

The town has three ceremonial maces. The large mace was given to Saffron Walden by James II in 1685 and provides an early recording of the unofficial coat of arms. Made of silver gilt, it is approximately 4 feet (1.2 m) long. Two smaller silver maces were bought by the corporation in 1549 to commemorate the granting of a new town charter by Edward VI. This purchase is recorded in the town's Guild of Holy Trinity accounts and reads, "For 2 new maces, weying 18 ownces one quarter and half at 8s. the ownce 7l.7s".

Sites and buildings of interest 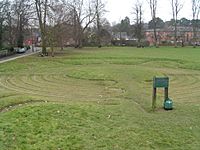 The 12th-century Walden Castle, built or expanded by Geoffrey de Mandeville, the first Earl of Essex is in ruins. After the medieval period, the castle fell into disuse and much of the flint was taken and used in the construction of local houses and the wall surrounding the Audley End estate. All that remains is the ruined basement.

Near to the castle is a turf maze, a series of circular excavations cut into the turf of the common. It is the largest example of this style of maze in England, the main part is about 100 feet (30 m) in diameter. The earliest record of it dates from 1699, although its origin may be earlier. It has been extensively restored several times, most recently in 1979.

The oldest inhabited building in the town is believed to be the former maltings at 1 Myddleton Place. The 15th-century building with a courtyard garden was used by the Youth Hostel Association from 1947 to 2010. It is now used for functions. Pevsner described it as: "without doubt, the best medieval house of Saffron Walden". Other notable early buildings are in Bridge Street, Castle Street and the side streets off the High Street. The High Street contains some late-Georgian and Victorian buildings. 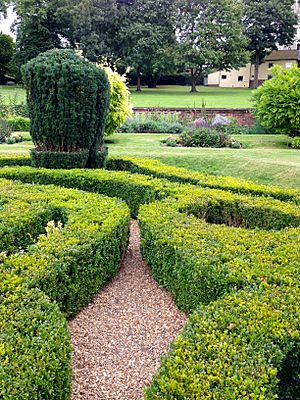 Bridge End Gardens, seven interlinked gardens – including a maze, rose garden and walled garden – was originally laid out by the Gibson family. They have been restored with help from the Heritage Lottery Fund and volunteers.

St Mary the Virgin, Saffron Walden is the largest parish church in Essex. The church dates mainly from the end of the 15th century, when an old smaller church was extensively rebuilt by the master mason John Wastell who was building King's College Chapel in the nearby city of Cambridge. In 1769 it was damaged by lightning and the repairs, carried out in the 1790s, removed many medieval features. The spire was added in 1832 to replace an older "lantern" tower. The church is 183 feet (56 m) long and the spire, 193 feet (59 m) high, is the tallest in Essex.

The town's Catholic church, Our Lady of Compassion, is on Castle Street. Created in 1906 from a 16th-century barn, it was restored in 2004-5. With a long history of non-conformism, Saffron Walden has a Baptist church and a Quaker meeting house. There is a United Reformed Church on Abbey Lane, a Methodist church on Castle Street now occupied as the Community Church by the independent former Gold Street Chapel which was located in Gold Street.

Saffron Walden is served by Audley End railway station, which is located 2 miles (3 km) outside the town in the village of Wendens Ambo, with regular bus services to the town centre. The station is on the West Anglia mainline service between Cambridge and London Liverpool Street Station, with an off-peak service of two trains an hour, southbound and northbound, and more services during peak times. The journey time to London is about 55 minutes. All southbound trains also stop at Tottenham Hale station, where there is a London Underground Victoria line station and onward rail connections to Stratford station in east London. The journey to Cambridge station from Audley End takes under 20 minutes. An hourly CrossCountry service between Stansted Airport and Birmingham New Street via Peterborough and Leicester also stops at Audley End. 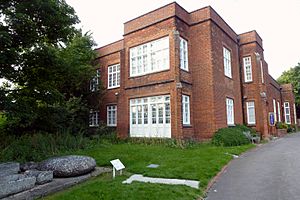 Saffron Walden museum, with a glacial erratic and stone coffins displayed in the grounds

Audley End Airfield, a private grass runway, is located about 1 mile (2 km) outside of the town.

Audley End House – once one of the largest mansions in England – is now in the care of English Heritage and open to the public. During the summer months, picnic concerts and a last night in the style of the BBC Proms have been held in the grounds. Audley End Miniature Railway – originally built by Lord Braybrooke – is a 10 1⁄4 in (260 mm) gauge railway ride through woodland adjoining Audley End House. The track is 1.5 miles (2.4 km) long and opened in 1964.

Saffron Walden Museum, which was established in 1835 by Saffron Walden Natural History Society, is close to the town castle. The museum had many benefactors from local families, including the Gibsons, Frys and Tukes. The first professional curator Guy Nathan Mayard, was appointed in 1889 and his son, also Guy Maynard, succeeded him as curator before moving on to Ipswich Museum. It is still owned by the founding society – now Saffron Walden Museum Society – and is managed by Uttlesford District Council. The museum contains the stuffed remains of a lion named Wallace(1812 – 1838), said to have inspired Marriott Edgar's comic poem "The Lion and Albert".

The Fry Art Gallery exhibits the work of artists who had an association with Saffron Walden and north west Essex, focusing on Great Bardfield Artists. The collection includes extensive artworks and supporting material by Edward Bawden, who lived in the town during the 1970s and 1980s, and Eric Ravilious.

Saffron Hall, which is attached to Saffron Walden County High School, opened in 2013. The 730-seater venue came about as a result of a £10 million donation by an anonymous music loving donor. In 2014, former head of music at the Barbican Centre Angela Dixon became its director.

The Anglo American playing fields, located close to Bridge End Gardens on Caton Lane, are home to the town's cricket club and were donated to Saffron Walden by the US Forces after the war. Prior to that, Saffron Walden Cricket Club played on the town's common – with a history of cricket matches recorded back to 1757. A monument at the site commemorates the American airmen and people of Saffron Walden who died in the Second World War.

Saffron Walden has a non-league football club Saffron Walden Town F.C., which also plays at Catons Lane. There is also a rugby club and a long-distance running and triathlon team. Lord Butler Leisure Centre is located on Peaslands Road and includes a pool, gym and sports injury clinic. The Tour de France passed through Saffron Walden in 2014.

Saffron Walden has a well-established hockey club with its main pitch and clubhouse in Newport and a second pitch at Saffron Walden County High School. The club has eight men's teams, seven women's teams and a large junior section. The women play in Prem A, which is one division below National League and the men play in Prem B. The town's skate park is an American-built facility. It opened in 2007.

Saffron Walden is the name of a tune often associated with the hymn Just as I am. It was written by Arthur Henry Brown (1830–1926) from Essex. He wrote many hymn tunes, which he often named after his favourite places.

Saffron Walden is twinned with:

All content from Kiddle encyclopedia articles (including the article images and facts) can be freely used under Attribution-ShareAlike license, unless stated otherwise. Cite this article:
Saffron Walden Facts for Kids. Kiddle Encyclopedia.