Chigwell is a civil parish and town in the Epping Forest district of Essex. It is an outlying suburb of London, located 12 miles (19 kilometres) north-east of Charing Cross. Along with the neighbouring suburban areas of Loughton and Buckhurst Hill, Chigwell forms part of the so-called "golden triangle" of Essex.

According to P. H. Reaney's Place-Names of Essex, the standard guide to etymology in the county, the name means 'Cicca's well', Cicca being an Anglo-Saxon personal name. In medieval sources the name appears with a wide variety of spellings including "Cinghe uuella" and Chikewelle". Folk etymology has sought to derive the name from a lost "king's well", supposed to have been to the south-east of the parish near the border of what is now the London Borough of Redbridge. There were several medicinal springs in Chigwell Row documented by Miller Christy in his book History of the mineral waters and medicinal springs of the county of Essex, published in 1910. The proposal by 18th-century local historian Nathaniel Salmon that the "-well" element in the name derives from Anglo-Saxon weald (forest), indicating Chigwell's location in a royal demesne rather than Anglo-Saxon wielle (well) has long been superseded by modern onomastic study and is no longer credible.

The land registration map of Redbridge Council shows "Chig Well (site of)" as being located to the rear of the house located at 67 Brocket Way, Chigwell.

Traditionally a rural farming community, but now largely suburban, Chigwell was mentioned in the Domesday Book. It was later spoke about by Charles Dickens in his novel Barnaby Rudge: A Tale of the Riots of 'Eighty; the Maypole Inn is based on the King's Head inn, though the name was taken from the Maypole public house in Chigwell Row; and it is likely Dickens visited both hostelries. Dickens frequently visited Chigwell, which he described in a letter as "the greatest place in the world...Such a delicious old inn opposite the church...such beautiful forest scenery...such an out of the way rural place!".

The Chigwell civil parish was part of Epping Rural District from 1894 to 1933, with local government split between Chigwell Parish Council, Epping Rural District Council and Essex County Council. Following a county review order in 1933, Chigwell formed together with Buckhurst Hill and Loughton the Chigwell Urban District, with the Chigwell Urban District Council replacing both the parish and rural district councils. When Greater London was created in 1965 a small, more densely populated section to the southeast was transferred to the London Borough of Redbridge; this area is now known as the Manford estate and continues to be within the Chigwell post town. The rest of Chigwell Urban District was incorporated into the Epping Forest District in 1974. Parish councils were re-established for Chigwell and Loughton, and for the first time in Buckhurst Hill, in 1996.

From 1933 to 1958 there was an RAF presence located at Roding Valley Meadows (near what is now the David Lloyd Leisure Centre). It served first to provide barrage balloon protection during World War II and was involved in the rollout of Britain's coastal nuclear early warning system during the Cold War. In 1953 it briefly housed the RAF contingent taking part in the Coronation celebrations. Some of the RAF Chigwell site is now part of the Local Nature Reserve, Roding Valley Meadows LNR. 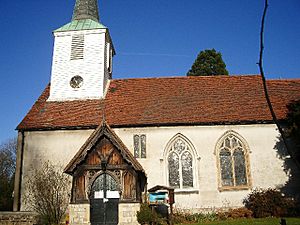 The hamlet of Chigwell Row lies towards the east of Chigwell, near Lambourne; this part of the parish is well forested and mostly rural. Grange Hill is the area around the junction of Manor Road and Fencepiece Road/Hainault Road, extending as far as the boundary with Redbridge including the Limes Farm estate. Chigwell has a population of around 12,500 and is generally considered a wealthy area, which since the TV series Essex Wives, journalists have called (with Loughton and Buckhurst Hill), the Essex golden triangle. The area is characterised by large suburban houses, notably in Manor Road, Hainault Road and Chigwell High Road, which featured in the popular English situation comedy Birds of a Feather (although many of the outside locations used in that programme were not in Chigwell). 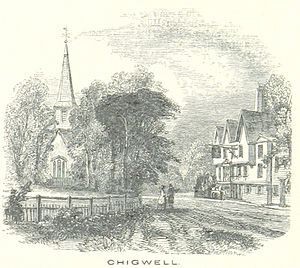 Until May 2012 Tottenham Hotspur Football Club had its training facilities in the area, when they moved to a new facility in Enfield, north east London, However the club still runs training sessions for local youth on the Limes Farm estate through the summer months. Many past and present players and staff have homes in the area. Leyton Orient Football Club also have a training ground in Chigwell, adjacent to Chigwell School's fields.

A David Lloyd Leisure Centre is situated off Roding Road by the M11 motorway, which offers indoor and outdoor tennis courts, swimming pools and gymnasium. Also in the area are a Holmes Place Health Club, Topgolf playing Centre and Chigwell Golf Club. Chigwell Cricket Club is based at the Old Chigwellians Club in Roding Lane. Chigwell also plays host to the Old Loughtonians Hockey Club. The town is also included in a number of London loop walks, which start in the city and passes through the outskirts of the capital.

There are two pubs, The King William IV and the Two Brewers.

Ye Olde King's Head, which was operated as a pub until 2011 is said to be the Maypole Inn in Dickens' Barnaby Rudge. The building was subsequently sold to local resident Lord Sugar's property company Amsprop which now leases the Grade 1 building to the Sheesh Turkish restaurant.

There is a Local Nature Reserve at Roding Valley Meadows off Roding Lane which follows the River Roding up to Loughton.

TV series Birds of a Feather is set in Chigwell. 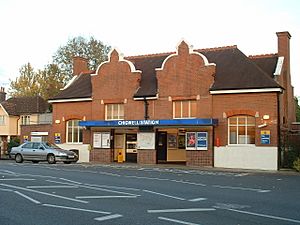 All bus services are TfL services, except route X5 and school routes 43, 804. Routes 150 and X5 only serve Chigwell Row. Routes 362 and 462 only serve Grange Hill. Chigwell is served by Chigwell station and Grange Hill station (further south bordering Hainault), both on the Central line of the London Underground. For a more frequent service to London there are also nearby Buckhurst Hill, Woodford, Loughton and Hainault stations as services between Grange Hill and Woodford are limited to three trains per hour in each direction, with an increased service during morning peak hours.

All content from Kiddle encyclopedia articles (including the article images and facts) can be freely used under Attribution-ShareAlike license, unless stated otherwise. Cite this article:
Chigwell Facts for Kids. Kiddle Encyclopedia.