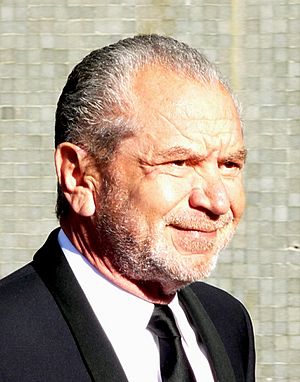 Sugar founded electronics company Amstrad in 1968. He was the chairman of Tottenham Hotspur F.C. from 1991 until 2001. He is the boss on The Apprentice. He has a fortune of about £770 million.

Sugar was born in Hackney, London and brought up in a council house there. He married in 1968. The couple live in Chigwell, Essex. They have two sons and a daughter. He is an independent life peer.

All content from Kiddle encyclopedia articles (including the article images and facts) can be freely used under Attribution-ShareAlike license, unless stated otherwise. Cite this article:
Alan Sugar Facts for Kids. Kiddle Encyclopedia.