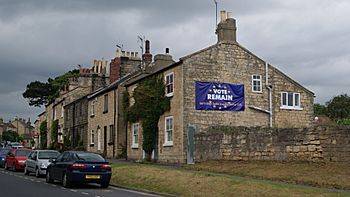 The referendum ended with 51.9% of votes in favour of leaving the EU.

On 24 June, the then Conservative Party leader and Prime Minister David Cameron announced that he would resign. He was replaced on 13 July by Theresa May.

Members of the Remain campaign wanted the United Kingdom to stay in the European Union. Political parties that wanted the UK to stay in the EU include the Labour Party, the Liberal Democrats and the Scottish National Party. They said that being in the EU gave the UK many advantages in trade.

Prime Minister David Cameron supported staying in the EU, but the Conservative Party was neutral. It was up to each MP to have their own view. Other well-known Conservatives who wanted to remain in the EU include George Osborne, Theresa May and Philip Hammond.

Members of the leave campaign, commonly called Brexit, wanted the UK to leave the European Union. Political parties who supported leaving the EU include United Kingdom Independence Party,, the Respect Party and many members of the Conservative Party. Those who supported "leave" were especially concerned about the EU's "open border" policies and mass migration.

Some well known members of the Conservative party who wanted to leave the EU included Iain Duncan Smith, Michael Gove and Boris Johnson. 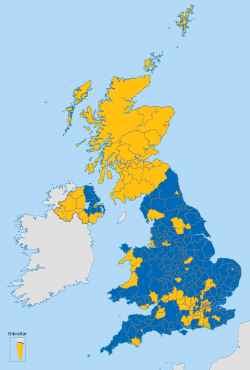 * Total votes only include Valid votes. About 25,359 were invalid or blank. Source:

Shortly after the results were announced, David Cameron said that he would resign by October 2016. After a leadership election, Theresa May became Prime Minister on 13 July.

The Scottish government announced on 24 June 2016 that they were planning to hold a second independence referendum. Northern Ireland politician Martin McGuinness also called for an Irish reunification referendum. A movement for London independence even occurred, with an online petition reaching thousands of signatures.

A "Bregret"/"Regrexit" petition was proposed by William Oliver Healey on 24 May 2016. It was made to support the creation of a second European Union membership referendum. By 25 June, more than two and a half million people signed the petition. Calls for a second referendum was later rejected by the government.

Theresa May officially triggered Article 50 on 29 March 2017. This means that negotiations have started between the UK government and the European Union. These talks are expected to last 2 years and after they have finished the UK will be out of the EU.

All content from Kiddle encyclopedia articles (including the article images and facts) can be freely used under Attribution-ShareAlike license, unless stated otherwise. Cite this article:
United Kingdom European Union membership referendum Facts for Kids. Kiddle Encyclopedia.