Jonathan Stephen Ross (born 17 November 1960) is an English television and radio presenter, film critic, actor and comedian best known for presenting the BBC One chat show Friday Night with Jonathan Ross during the 2000s. Ross also hosted his own radio show on BBC Radio 2, and acted as a film critic and presenter of the Film programme. After leaving the BBC, Ross then began hosting a new chat show on ITV, The Jonathan Ross Show. Other regular roles have included being a regular panellist on the comedy sports quiz They Think It's All Over and being a regular presenter of the British Comedy Awards. 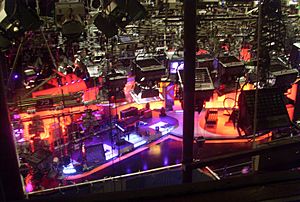 Ross began his television career as a programme researcher, before débuting as a television presenter for The Last Resort with Jonathan Ross on Channel 4 in 1987. In 1999, Ross took over presenting the Film programme, and also began presenting his own radio show, while two years later he began hosting Friday Night with Jonathan Ross. For the chat show, Ross won three BAFTA awards for Best Entertainment Performance, in 2004, 2006 and 2007. By 2006 Ross was believed to be the BBC's highest paid star. In 2005, Ross was made an Officer of the Order of the British Empire (OBE) for services to broadcasting. 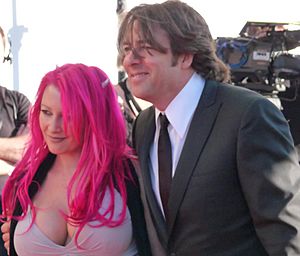 Ross has been married to the author, journalist and broadcaster Jane Goldman since 1988; they have three children. Ross and Goldman have together established the television production company Hotsauce TV. Ross is known as an avid fan and collector of comic books and memorabilia, and has written his own comic books, Turf and America's Got Powers. Ross is known for his distinctive voice, flamboyant style of dress, light-hearted banter and his characteristic difficulty in pronouncing the letter 'R'.

All content from Kiddle encyclopedia articles (including the article images and facts) can be freely used under Attribution-ShareAlike license, unless stated otherwise. Cite this article:
Jonathan Ross Facts for Kids. Kiddle Encyclopedia.