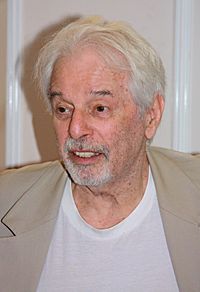 He is best known for his avant-garde movies. He is popular among cult cinema fans for his work. His movies are "filled with violently surreal images" and a mix of "mysticism and religious provocation".

He was born in Tocopilla, Chile.

All content from Kiddle encyclopedia articles (including the article images and facts) can be freely used under Attribution-ShareAlike license, unless stated otherwise. Cite this article:
Alejandro Jodorowsky Facts for Kids. Kiddle Encyclopedia.