Wanstead is a town in East London, England, in the London Borough of Redbridge. It borders South Woodford to the north, Redbridge to the east and Forest Gate to the south, with Leytonstone and Walthamstow to the west. It is located 8 miles northeast of Charing Cross.

Historically an ancient parish in the Becontree hundred of Essex, it was granted urban district status in 1854, and formed part of the Municipal Borough of Wanstead and Woodford between 1937 and 1965, when it became part of the London Borough of Redbridge. Wanstead was a key part of the M11 link road protest from 1993 to 1995, which ended with the construction of the A12 that runs through the town.

The area contains a number of open spaces that are part of Epping Forest, including the grasslands of Wanstead Flats and the woodland of Wanstead Park. Wanstead Park was the site of a Roman villa, and later Wanstead Hall, the manor house of Wanstead Manor. The park, with artificial lakes, was formerly part of the estate of a large stately home Wanstead House (1722-1825), built by Richard Child, 1st Earl Tylney.

In 1707 the astronomer James Pound became rector of Wanstead. In 1717 the Royal Society lent Pound Huygens's 123-foot focal length object-glass, which he set up in Wanstead Park. Pound's observations with it of the five known satellites of Saturn enabled Halley to correct their movements; and Newton employed, in the third edition of the Principia, his micrometrical measures of Jupiter's disc, of Saturn's disc and ring, and of the elongations of their satellites; and obtained from him data for correcting the places of the comet of 1680. Laplace also used Pound's observations of Jupiter's satellites for the determination of the planet's mass; and Pound himself compiled in 1719 a set of tables for the first satellite, into which he introduced an equation for the transmission of light.

Pound trained his sister's son, James Bradley, and many of their observations were made together, including the opposition of Mars in 1719, and the transit of Mercury on 29 October 1723. Their measurement of γ Virginis in 1718 was the first made of the components of a double star and was directed towards the determination of stellar parallax.

In 1727, Bradley embarked upon a series of observations using a telescope of his own, erected at the rectory in Wanstead, now the site of Wanstead High School. This instrument had the advantage of a large field of view and he was able to obtain precise positions of a large number of stars that transited close to the zenith over the course of about two years. Combined with observations from his friend Samuel Molyneux's house at Kew in Surrey, this established the existence of the phenomenon of aberration of light, and also allowed Bradley to formulate a set of rules that would allow the calculation of the effect on any given star at a specified date. 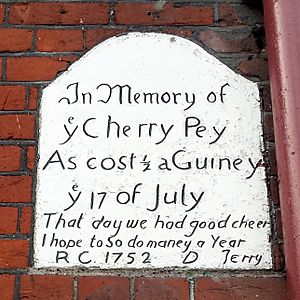 The plaque on the side of The George pub, commemorating a cherry pie

Although The George is not a particularly old building, there has been a pub on that site for hundreds of years. Set in to the side of the pub is a plaque dating from 1752 which was formerly part of an older pub building. The plaque is inscribed with the eccentrically spelled verse:

There are various local legends explaining this curious plaque, including a tale of the theft of a cherry pie by local workmen who were caught and fined half a guinea (52.5p). However the most likely explanation is that it was placed there by the landlord of 1752, David Jersey (corrupted by centuries of repainting and re-cutting the inscription to D Jerry on the plaque), commemorating a feast which included a huge cherry pie. Monstrous pies were a feature of 18th-century Essex rural festivals; the Galmpton Gooseberry Pie Fair in Devon is still in existence, and other inns around the edge of Epping Forest were famed for pies (rabbit pie at The Reindeer, Loughton, now Warren House, and pigeon pie at The King's Head, Chigwell). Wanstead was well known for its cherry orchards as late as the 1830s, when they were mentioned by poet Thomas Hood, who lived in Wanstead 1832-5.

The Royal Commercial Travellers Schools were sited in Wanstead from their foundation in 1845 by John Robert Cuffley until their move to Pinner in 1855. The schools at Wanstead provided housing, food, clothing and education for up to 130 children of commercial travellers who had died or became unable to earn their livelihood.

The Royal Merchant Navy School was founded in St George in the East, London in 1827 before moving to Hermon Hill, Wanstead in 1862. The new building provided for 300 orphans of Merchant Navy seamen. It moved again to Bearwood near Wokingham in 1921. The building then became a convent refuge for women and girls and later Wanstead Hospital. 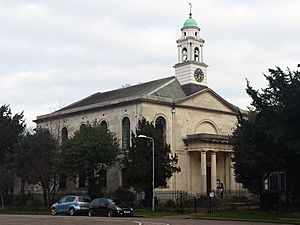 The church of St Mary the Virgin, Wanstead was completed in 1790. It is now a Grade I listed building, and contains a large monument to Josiah Child. It was followed in the 1860s by both the Anglican church of Christ Church and Wanstead Congregational Church.

An area near the A12 M11 Link Road (which was built in the 1990s) beside the section from Blake Hall Road to Selsdon Road was in 2008 preserved by local residents as a Wild-Flower Meadow with a year-round display of wild and naturalised plants, shrubs and trees; starting in spring with oxlip (P. elatoir), cowslip (Primula veris), primrose (P. vulgaris), and meadow buttercup (Ranunculus acris), followed by many species including the grass vetchling (Lathyrus nissolia). The meadow is listed as one of the main Primula species meadows in Greater London. The fauna of the area includes birds, foxes, Muntjac deer, and squirrels. 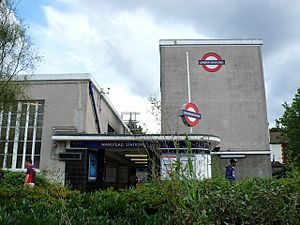 The nearest London Underground stations are Snaresbrook and Wanstead on the Central line.

All content from Kiddle encyclopedia articles (including the article images and facts) can be freely used under Attribution-ShareAlike license, unless stated otherwise. Cite this article:
Wanstead Facts for Kids. Kiddle Encyclopedia.