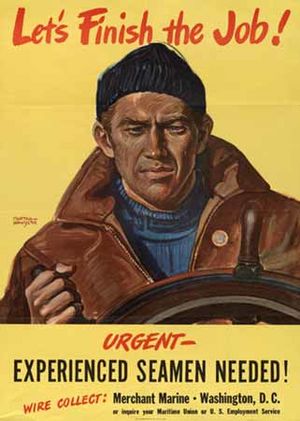 The British Merchant Navy, known simply as the Merchant Navy, is the maritime register of the United Kingdom, and describes the seagoing commercial interests of UK-registered ships and their crews. Merchant Navy vessels fly the Red Ensign, and are regulated by the Maritime and Coastguard Agency (MCA).

All content from Kiddle encyclopedia articles (including the article images and facts) can be freely used under Attribution-ShareAlike license, unless stated otherwise. Cite this article:
Merchant Navy Facts for Kids. Kiddle Encyclopedia.