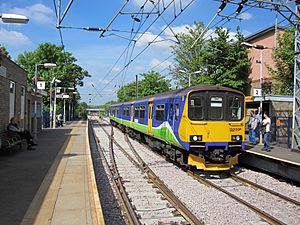 Train at South Tottenham on a Gospel Oak to Barking service

The Gospel Oak to Barking line (sometimes unofficially called the GOBLIN) is part of the Network Rail system. It is 13 miles 58 chains (22.1 km) long from one terminus to the other. It carries both through goods trains and London Overground passenger trains, connecting Gospel Oak station in north London and Barking station in east London. The line is part of Network Rail Strategic Route 6, and is classified as a London and South East Commuter line. For much of its existence the line has played a minor role in London's transport system. It is now receiving significant investment to increase its capacity. This will include full 25 kV AC overhead electrification which is due to be completed in 2018.

All content from Kiddle encyclopedia articles (including the article images and facts) can be freely used under Attribution-ShareAlike license, unless stated otherwise. Cite this article:
Gospel Oak to Barking line Facts for Kids. Kiddle Encyclopedia.