East Finchley is an area in north London, in the London Borough of Barnet, and situated 5.4 miles (8.7 km) north-west of Charing Cross. Geographically it is somewhat separate from the rest of Finchley, with North Finchley and West Finchley to the north, and Finchley Central to the west.

East ward of Finchley Urban District in the 1930s 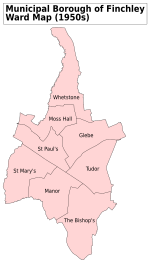 Wards of Finchley Municipal Borough in the 1950s

The land on which most of East Finchley now stands was once part of the Bishop of London's hunting ground, named Finchley Common, first recorded around 1400. The Bishop of London built a road through his land which weaved through what is now Market Place, The Walks, King Street and Oak Lane up to the north. As a result, pubs such as The White Lion, The Bald Faced Stag and The Five Bells (on East End Road), all of which survive today, sprang up to provide rest for the people using the road.

The area of "East Finchley Village" around Church Lane was west of the common and Bulls Lane (now Church Lane) dates back to at least the 17th century. With the coming of the Great Northern Railway in 1868 the area began to emerge, and property was built gradually between the 1870s and the 1930s. However, it was not until 1914 that a more recognisable East Finchley High Road and surrounding area was visible. 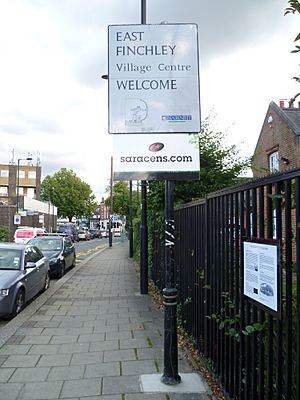 East Finchley tube station is marked by a well-known statue of an archer by Eric Aumonier in the Art Deco style. The archer is pointing his arrow towards the entrance to the tunnel which starts south of the station and runs for 17.3 miles (27.8 km) to the end of the Northern line at Morden. For many years this was the longest tunnel in the world. There was originally an arrow at Morden Station to match the archer at East Finchley, but this was stolen a few months after the station was opened.

The station is on the High Barnet branch of the Northern line which serves the city (via Bank) and the west end (via Charing Cross) with trains every 2–3 minutes. Buses also serve the high street with the 263 route going from Barnet Hospital to Highbury Barn; the 143 bus linking East Finchley to Archway and Brent Cross; the 102 from Edmonton Green, and the 234 serving Barnet (the Spires) from Highgate Wood. 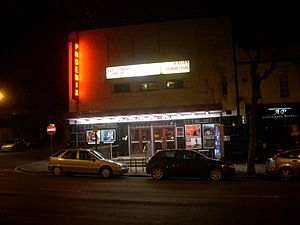 The independent Phoenix Cinema (once called the Rex and before that the Coliseum) is located on the High Road, and regularly shows films with more individual appeal than is the case with the cinema chains. It is the oldest purpose-built cinema in the UK (the only older ones having started life as theatres). Time Out, the arts magazine, describes the Phoenix as the best single-screen cinema in London. Film critic Mark Kermode has written that the Phoenix Cinema "remains the single most significant cinema in my development as a bona fide cinema obsessive."

There is a listed Neo-Georgian public library located on the High Road opposite Leslie Road. Behind the library are some award-winning allotments, owned by Barnet Council. Adjacent to these are the Fuelland allotments which are held in trust. The massive St. Pancras and Islington Cemetery is located on the High Road. Established in 1854, it is the oldest municipal cemetery in London and the largest. The Victorian painter Ford Madox Brown is buried there.

Opposite the tube station is Cherry Tree Wood, approx. 4.5 ha in size, and contains both woodland and grassland. Nearby parks include Coldfall wood to the north, and Highgate Wood, Queens Wood, and Hampstead Heath to the south.

Also opposite the tube station is the head office to McDonald's UK, this is seen by the flags and logos on the building.

All content from Kiddle encyclopedia articles (including the article images and facts) can be freely used under Attribution-ShareAlike license, unless stated otherwise. Cite this article:
East Finchley Facts for Kids. Kiddle Encyclopedia.