St Pancras and Islington Cemetery is a cemetery in East Finchley, North London. Although it is situated in the London Borough of Barnet, it is run as two cemeteries, owned by two other London Boroughs, Camden (formerly St Pancras) and Islington. The fence along the boundary which runs west to east between the two parts of the cemetery has been removed, although the line of it is still marked.

St Pancras and Islington is the third-largest single cemetery serving London, and in burial numbers, it is the largest in the UK with around one million interments and cremations. The cemetery is designated Grade II* on the English Heritage Register of Parks and Gardens of Special Historic Interest in England.

The cemetery was the first publicly-owned cemetery in London. 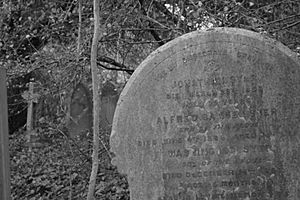 Headstone from the eastern boundary 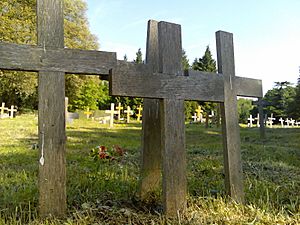 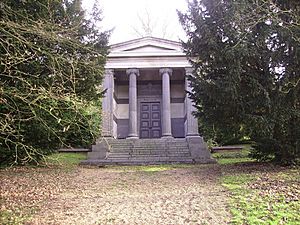 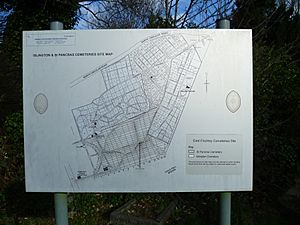 The St Pancras Anglican chapel (listed grade II) lies at the centre of the semicircular drive which links the entrance and exit to the cemetery, c 250m north-east of the entrance. It was built in 1853 by John Barnett and William C. Birch in a cruciform design, with decorated windows in Gothic style and a central octagonal crossing tower and spire. It was used by both St Pancras and Islington until 1896, when the Islington chapel was built. The Nonconformist chapel was built in the early 1850s by Barnett and Birch and had a six-sided lantern. It was demolished in the 20th century.

The St Pancras Roman Catholic chapel (1896; now demolished) lay on the north side of Roman Road (c 540m north-east of the Islington Anglican chapel), and was in a simple Gothic style. Many of the tombs in the Roman Catholic section are decorated with angels.

St Pancras Cemetery has a war graves plot containing over 100 graves from both world wars, together with a number of headstones retrieved from graves that were scattered elsewhere in the cemetery and could not be maintained. A memorial bears the names of 27 casualties whose graves could not be marked individually, and of six First World War casualties buried in the adjacent Islington Cemetery who could not be commemorated there. In total 299 First World War Commonwealth service casualties – including one unidentified Royal Navy sailor – and 207 Second World War casualties are commemorated or buried here. The Victoria Cross recipient John Ross is buried here.

Islington Cemetery contains the graves of 334 Commonwealth service personnel of the First and 265 of the Second World War, which are all scattered throughout the cemetery. A Screen Wall memorial in the western part of the cemetery lists names of those buried here whose graves could not be individually marked by headstones, together with those of two servicemen of the Second World War who were cremated at Islington Crematorium. Six soldiers buried in this cemetery whose graves could not be located are alternatively commemorated on stones in St Pancras Cemetery (above).

The grade II listed Mond Mausoleum by Thomas Arthur Darcy Braddell is built in the Grecian style (based on the Temple of Nemesis) in granite and Portland stone, with a pediment supported by two fluted Ionic columns. It was built for Ludwig Mond, a German-born chemist and industrialist.

There is a memorial for William French who died on 13 July 1896 while saving a dog from drowning in Highgate Ponds North London. The monument was paid for by public subscription.

Due to the areas covered by the old parishes and the later Borough Councils, many of the burials of central/north Victorian London are contained within the cemetery. Thus it represents a large historical cross section of London from the 1850s on. There are tombs of every type and style, with the larger Victorian and Edwardian monuments strategically placed along the main drives (Viaduct Road, Circular Road, and Church Road), and at the main junctions.

St Pancras and Islington Cemetery has the largest number of interments of any cemetery in the UK, with around 812,000 burials and 56,000 cremations recorded since its opening in 1854 (excluding the exhumations and re-interments from demolished churchyards which make the number reach over 1 million). There are many interesting graves at the cemetery, including one put up by the St Pancras Board to celebrate members of their parish who had reached the 100 years milestone. 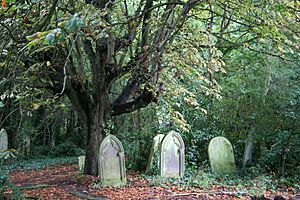 The cemetery has areas of neutral open grassland, wetland and ancient woodland. It is a Site of Borough Importance for Nature Conservation, Grade II.

The London Ecology Unit has advised the owners on management aimed to conserve natural features, whilst recognising the primary use of the cemetery as a burial ground. In recent years, there has been a policy of informed indifference to areas that are not in active use for burials. The result has been a proliferation of natural wildlife. Large tracts of scrub and secondary woodland have been allowed to develop on former burial plots, supplementing the original plantings, and producing an exceptionally diverse habitat.

This mixed secondary woodland consists largely of sycamore and ash, with much pedunculate oak, hawthorn and willow. Some exotic ornamental trees have been introduced from time to time, including avenues of limes and horse chestnuts, Lawson's cypress, various pines, yew and monkey-puzzle.

Holly and bramble woodland flora grows beneath the trees and alongside paths, including bluebells, pignut, goldilocks buttercup, cuckoo flower, bugle, and wild strawberry. These have spread from the adjacent woodland, or survived from the cemetery's prior existence as Horseshoe Farm.

In the north-east corner of the cemetery, the Strawberry Vale Brook, culverted for most of its length, emerges into an open course. Wetland habitats here contain mature white willow, rushes, reedmace, marsh thistle, pendulous sedge, and great willowherb.

All content from Kiddle encyclopedia articles (including the article images and facts) can be freely used under Attribution-ShareAlike license, unless stated otherwise. Cite this article:
St Pancras and Islington Cemetery Facts for Kids. Kiddle Encyclopedia.