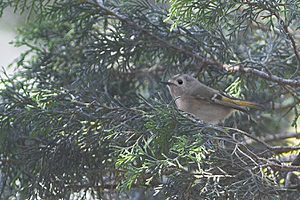 The goldcrest (Regulus regulus) is a tiny passerine bird in the kinglet family. Its colourful golden crest feathers gives rise to its popular name. The scientific name, R. regulus, means king or knight.

There are several subspecies. The bird has a very large distribution range: much of the Palearctic and the islands of Macaronesia and Iceland. Birds from the north and east of its breeding range migrate to winter further south.

The goldcrest breeds in coniferous woodland and in gardens, It builds its compact, three-layered nest on a tree branch. Ten to twelve eggs are incubated by the female alone. The chicks are fed by both parents, and second broods are common.

This little bird is always on the move as it searches for insects to eat. In winter it is often found with flocks of tits. It may be killed by birds of prey or carry parasites, but its large range and population means it is doing quite well. It is not a conservation concern.

All content from Kiddle encyclopedia articles (including the article images and facts) can be freely used under Attribution-ShareAlike license, unless stated otherwise. Cite this article:
Goldcrest Facts for Kids. Kiddle Encyclopedia.