The Paridae is a family of tiny birds, the tits (called 'chickadees' or 'titmice' in North America). They are passerine songbirds which are native to the northern hemisphere and Africa. Most of them used to be classified in the genus Parus, which has now been split up.

These birds are mainly small stocky woodland species with short stout bills. Some have crests. They range in length from 10 to 22 centimetres. They are adaptable birds, with a mixed diet including seeds and insects.

Many species will live around human habitation and come readily to bird feeders for nuts or seed, and learn to take other foods. In Britain, Great Tits and Blue Tits learned to break through the foil caps sealing bottles of milk on doorsteps, to get at the cream on top. Of course, the change in milk packaging has robbed them of this delicacy.

These are hole-nesting birds, typically using trees, although some species build nests on the ground. They lay anything from three to nineteen speckled white eggs, depending on species.

The tits are active, noisy, social birds. They are territorial during the breeding season. The tits are highly adaptable and, after the corvids (crows and jays) and parrots, amongst the most intelligent of all birds.

The tits make a variety of calls and songs. They are amongst the most vocal of all birds, calling continuously and loudly. They are only ever silent for reasons such as avoiding predators or when intruding on a rival's territory. Quiet calls are made while feeding to keep contact with others in their social group. Other calls are used for signalling alarm—the most famous of which is the "Chic-a-dee-dee" of North American species in the genus Poecile. The call also serves a rallying call to summon others to mob and harass the predator. It has been demonstrated through experiments that the number of "dee" syllables at the end of the call increases with the level of danger the predator poses. 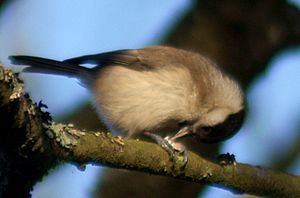 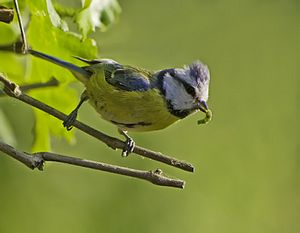 The tits are insectivorous, and eat a wide range of small insects and other invertebrates, particularly small leaf-eating caterpillars. They also eat seeds and nuts, especially in winter. A typical activity is hanging, where they inspect a branch or twig and leaves from all angles while hanging upside down to feed.

In areas with several species of tit, the different species will forage (search) in different parts of a tree. Larger species forage on the ground, medium sized species forage on larger branches, and the smallest species on the ends of branches. If they get larger prey or seeds tits will engage in 'hold-hammering'. They hold the item with one foot, and hammer it with the bill until it is open. In this way they can open hazelnuts in 20 minutes. A number of genera engage in food caching, hoarding supplies of food during the winter. These caches are usually of seeds but may be of insects.

All content from Kiddle encyclopedia articles (including the article images and facts) can be freely used under Attribution-ShareAlike license, unless stated otherwise. Cite this article:
Paridae Facts for Kids. Kiddle Encyclopedia.