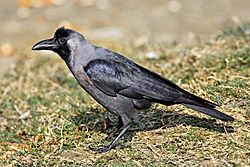 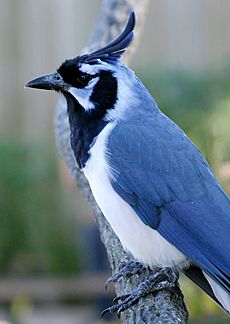 An example of variation in the crow family: the Black-throated Magpie-Jay of northwestern Mexico

The Corvidae are the crow family. They are all passerines. There are over 120 species in the family. The word 'crow' is also used to describe birds in the genus Corvus. This genus includes the crows, jackdaws and ravens.

A group of crows is called a murder.

Most members of the crow family are black, such as crows, rooks, choughs, ravens and jackdaws. However, not all crows are black. Magpies and treepies can be black and white, or blue and green, or brown. Jays are often blue and white.

Crows are some of the most intelligent birds in the world. Crows and rooks are good at using tools, for example sticks or twigs. Magpies can see themselves in a mirror and they understand that it is a reflection. Many crows live near to humans in towns and cities. Some crows (such as Treepies) live in forests. They are more shy than the crows that live in cities.

Some crows in North America, Europe and northern Asia migrate. This means they travel to different places in summer or winter. Most crows are resident birds. This means they live in the same place all year round.

Many crows live in large groups. For example, many rooks nest together in large groups at the top of trees. This is called a rookery. Crows in big groups are often noisy. However, when it is the breeding season (this means when birds nest and have babies), crows can become angry and will scare off other crows.

Crows eat a variety of food. They will eat fledglings (baby birds) and eggs from nests, small animals (mice and rats), carrion (dead animals), vegetables and garbage. for much of the year, crows and rooks dig into grassland with their strong beaks, and eat various kinds of insect grubs and worms. Because they may attack the nest of other birds, crows may get mobbed by other species. This is when the defending birds group together to chase off the crow. Also, on farms, crows will eat vegetables and seeds. Farmers do not want this to happen so they make a scarecrow. This is an object made of straw and old clothes. It looks like a man and it may scare the crows away.

Crows make their nests in tall trees. They make the nest from large sticks. They usually lay 3–8 eggs. Both parents will look after the fledglings.

All content from Kiddle encyclopedia articles (including the article images and facts) can be freely used under Attribution-ShareAlike license, unless stated otherwise. Cite this article:
Corvidae Facts for Kids. Kiddle Encyclopedia.